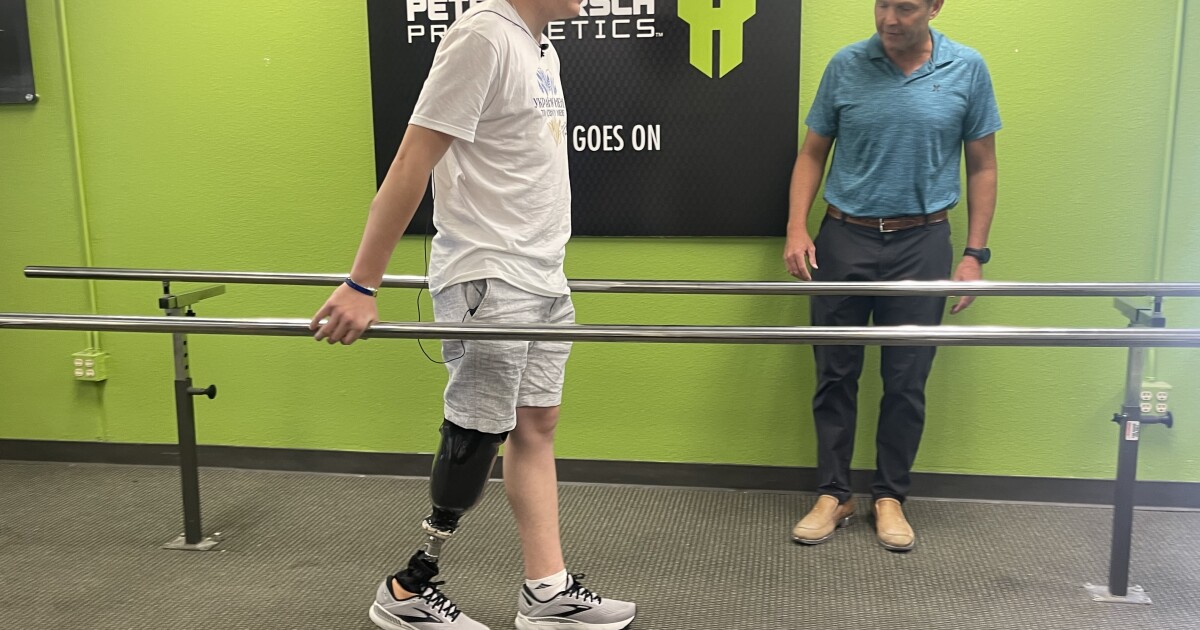 He was on his way home from the grocery store in the Ukrainian town of Sumy with his mom and stepfather — one month into the Russian invasion — when the war’s brutality upended his family’s world.

“A column of enemy Russian vehicles caught up to us, one of the tanks veered away from the column and came directly toward us,” Chaban said.

He was pulled under the tank and lost part of his leg. His stepfather died in the attack. His mother survived. Through the recounting of it all, he still smiles.

“I want to live,” Chaban said.

And he wants to be fully mobile again.

Chaban took his first steps toward that goal on his new prosthetic leg with prosthetist Peter Harsch, a world a way on Tuesday in San Diego.

The Ukrainian Embassy in Washington D.C. partnered with the San Diego-based Right to Walk Foundation to bring Ivan to the United States.

Family friend Olena Herenko, who came with Ivan, said he wants to be able to provide for his family, consisting of his two sisters, two brothers and mother.

“Life up to this point was not easy for Ivan, a large family without a father, he does what he can to help,” Herenko said. “He is not in any way negative or sorry for himself. He is charging forward.”

That’s the precise attitude he will need for what lies ahead.
Chaban’s rehabilitation journey will not be easy.

Chaban will be in San Diego for the next three months. He will spend much of his time at Peter Harsch Prosthetics where the work for people, who have lost limbs, isn’t exclusively physical.

“It’s also the emotional stuff as they’re sitting here waiting, thinking about the family back home, what happened to them,” Harsch said. “We pick them back up so they can go again to the next level. Anybody can make Ivan walk. But can they take them to the next level, the level they need to really go back and do their life?”

Harsch was impressed with Chaban’s first day on his prosthetic leg. Chaban had only been measured for it the day before.

“Send it back to his mom and tell her he’s walking second day.” said Harsch, referring to cell phone video.

Chaban puts his hands together in gratitude. He has big dreams. He wants to go to Hollywood and make it as an actor. He still needs a local host family to help him through his recovery, so he can make his dream a reality. One small step at a time.