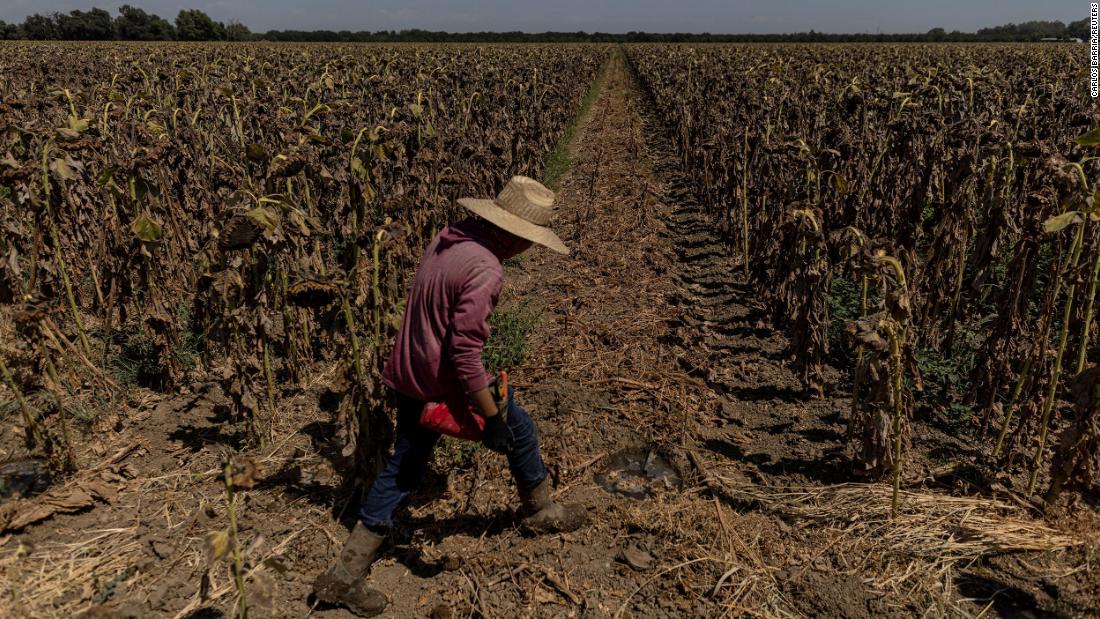 The extreme weather is forecast as Tropical Storm Kay moves northward after making landfall in Mexico as a Category 1 hurricane Thursday afternoon. Kay was downgraded to a tropical storm Thursday evening, but was still packing winds of 70 mph with even stronger wind gusts.
Those powerful, damaging winds are threatening to push already high temperatures across California even higher, extending a brutal heat wave that’s fueled raging wildfires, strained the state’s energy grid and prompted officials to urge residents to conserve energy use in the hopes of avoiding rolling power outages. More than 40 million Californians remain under heat alerts and triple digit temperatures are expected to continue Friday.

Kay is weakening, but the storm is not expected to turn away from the coast until Saturday night.

From severe drought to flood and gale watches

The Imperial Valley region, home to one of the nation’s most productive farm belts, is bracing for serious damage. All of Imperial County is in severe drought, according to the US Drought Monitor, and has been since early spring — but getting all the rain they’ve missed out on at once will not help with recovery.

“Imperial Valley farmers are in the middle of preparing their lands for the planting season, so a half an inch to one inch of rain will cause damage and delays to their schedule,” said Robert Schettler, a spokesperson for the Imperial Irrigation District.

Here’s just how much water the region could see: Imperial County Airport on average receives 2.38 inches of rain each year. The National Weather Service is forecasting 2 to 4 inches over the course of 36 hours on Friday and Saturday.

In Palm Springs, which typically sees 4.61 inches of rain annually, 2 to 4 inches are forecast. Three inches at Palm Springs would put this month in the top three wettest Septembers for the city, where the average September rainfall is 0.24 inches.

And Yuma, Arizona, could see 1.5 inches — which would make 2022 the wettest September since 2009. The city’s average September rainfall is 0.68 inches.

But it’s not just the water that officials are worried about.

“We have high wind warnings in effect, gale watches, flood watches and the soon-to-expire excessive heat warnings,” Alex Tardy, a meteorologist with the National Weather Service for San Diego, said in a virtual briefing Thursday evening. “The wind and the rain is moving on in and it will be significant Friday afternoon, through Friday night and early Saturday morning.”
The weather service for the city said it was expecting “strong, damaging, east wind” for much of Friday over and west of the mountains. Those warm, dry winds from the east will likely increase the region’s already high fire risk — amid the ongoing heat wave that’s baking much of California.
The strong winds are expected to reach states as far north as Oregon, prompting the National Weather Service Portland to tweet that “a red flag warning … will be in effect this FRIDAY & SATURDAY, due to the expected strong east winds and low humidity. These conditions can cause rapid spread of fire.”
Wind gusts in the region are expected to range from 25 to 50 mph, according to a tweet from the weather service in Portland.

Utility companies Pacific Power and Portland General Electric announced that they may proactively turn off power in some high-risk areas to reduce the risk of fire.

The outages would be implemented “in a limited, high-risk area to help reduce the risk of wildfire and to help protect people, property and the environment,” Portland General Electric said in a release. The utility says the move could impact about 30,000 customer meters in the Portland and Salem, Oregon area.

Pacific Power issued a similar statement, and said approximately 12,000 customers in Linn, Douglas, Lincoln, Tillamook, Marion and Polk counties have been notified of the potential shutoffs.

With triple-digit temperatures likely continuing for much of California Friday, new all-time high records are expected to be broken.

The dangerously high heat and coming winds are no help to the firefighters battling flames that have already charred thousands of acres.

California Gov. Gavin Newsom on Thursday declared a state of emergency for three counties over two blazes that were raging on.
In Riverside County, the Fairview Fire has already burned through nearly 24,000 acres and was 5% contained as of Thursday night, according to Cal Fire. Two people have died, one person has been injured and at least 12 structures have been destroyed, officials have said.

The double-whammy of wind swirling within the mountainous terrain will make the fire’s erratic behavior particularly dangerous to contain, but heavy rainfall from Kay will likely alleviate some risk Friday evening, according to CNN meteorologist Derek Van Dam.

Meanwhile, the Mosquito Fire, burning in both El Dorado and Placer counties, has charred through more than 13,700 acres and was 0% contained Thursday night, according to Cal Fire. Evacuation orders have been issued for parts of Placer County, and some residents of El Dorado County have been warned to prepare for the possibility of evacuations, officials said.
The blaze, which is threatening over 3,600 structures, demonstrated “extreme fire behavior and growth” Thursday and is burning in “extremely difficult terrain,” according to Cal Fire.
“Both fires are threatening multiple communities and critical infrastructure, forcing the evacuation of tens of thousands of residents,” the governor’s office said in a statement.