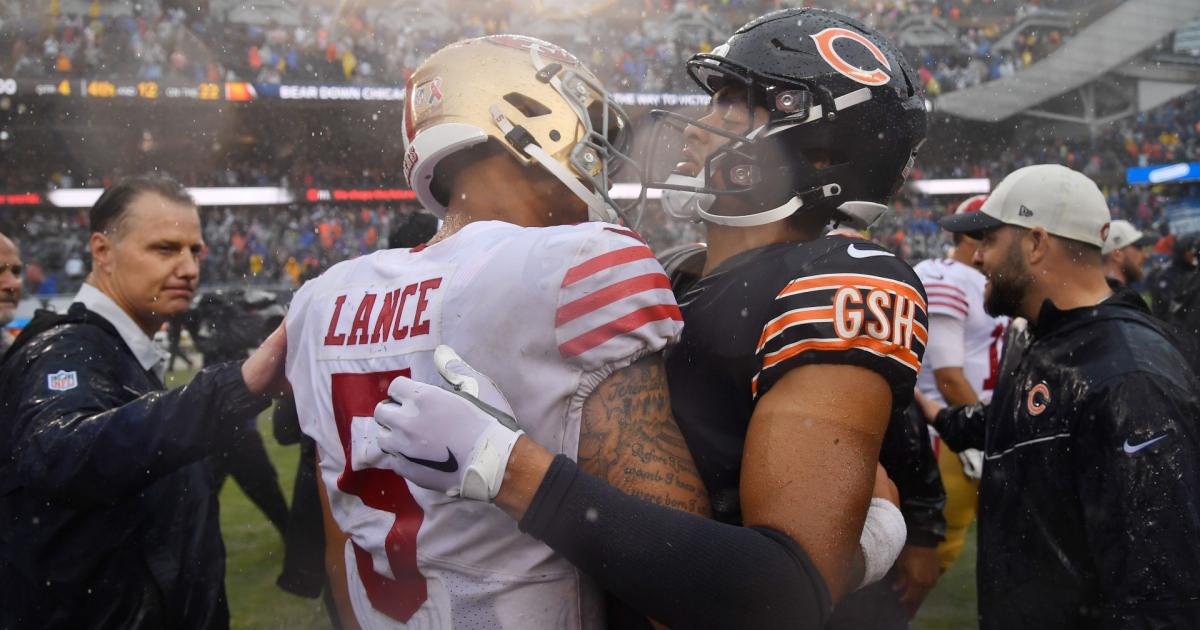 “What happens in NFL Week 1 will be true for the rest of the regular season” . . . is the ultimate overreaction. But because we’ve been waiting so long to see every team back in action, every initial result is magnified.

Just as a great performance can be made to seem like the best ever, a bad game can be equated to the end of the world. A shocking loss feels like it might have lasting effects and a surprising win can carry a positive effect.

In reality, it’s only one game and there are 17 more weeks before the playoffs to determine what actually is in store for the most notable players and teams.

Lance’s first start as San Francisco’s “unquestioned” starting QB was a disaster. He completed fewer than half of his pass attempts (13-of-28 passing, 164 yards, two sacks, one INT, 65.2 passer rating, 5.5 YPA) in a sloppy 19-10 loss at Chicago. His team-high 54 rushing yards didn’t spark the offense in rainy, muddy conditions.

The highlights were two big pass plays, one early to Brandon Aiyuk and one late to Jauan Jennings. But the conditions weren’t conducive to him showing off his big arm or finding his footing, and the intermediate passing game was minus tight end George Kittle. Losing top running back Elijah Mitchell midgame didn’t help. Lance did play fellow buzzy second-year QB Justin Fields to a draw; the difference was Fields’ two long balls that turned into TDs.

Kyle Shanahan and the 49ers have no plans to employ a quick hook with the No. 3 overall pick in 2021. Garoppolo remains on the roster as a strong backup plan, but it will take a lot more poor play from Lance for him to be replaced by Jimmy G in a non-injury situation. If Lance can’t figure out a bad Seahawks defense at home under what likely will be better weather conditions in Week 2, then that might be a worthy conversation. For now, Shanahan must stay the course and give Lance a pass given the offense as a whole stunk it up against the Bears.

“Aaron Rodgers can’t save these Packers with another MVP run”

Rodgers had a rough time in Green Bay’s 33-7 drubbing at NFC North rival Minnesota. He failed to throw a TD (22-of-34 passing, 195 yards, one INT, four sacks, 79.9 passer rating, 5.1 YPA) in a very compressed passing game. He was missing starting tackles David Bakhtiari and Elgton Jenkins and one of his more reliable receivers, Allen Lazard.

Between rookies Romeo Doubs and Christian Watson and veterans Randall Cobb and Sammy Watkins, no one stepped up to fill the void of Lazard and former Packers starters Davante Adams and Marquez Valdes-Scantling. The Packers tried to compensate by loading up running backs Aaron Jones and A.J. Dillon with carries and catches, but a beefed-up Vikings front was up to the task with Rodgers’ downfield passing not being as daunting.

The Packers’ talented defense hung in but had little margin for error against the Vikings’ superstar 1-2 punch of Justin Jefferson and Dalvin Cook.

Rodgers is still capable of lifting the Packers to another big season and ensuring the Vikings don’t steal the division, but he needs some help. Being without Adams is a big adjustment, and both Rodgers and coach Matt LaFleur are too smart to not figure it out sooner rather than later.

Expect some of it to happen in Week 2 in prime time against the Bears — the team Rodgers “owns.” Keep in mind that Rodgers and the Packers were destroyed by the Saints in Jacksonville in Week 1 last year. They still won 13 games and earned the NFC’s No. 1 seed.

While Hill was having a monster game in helping Mike McDaniel and the Dolphins beat Bill Belichick and the Patriots, Mahomes marched on without his go-to, big-play wide receiver in a 44-21 road stomping of the Cardinals.

Mahomes ripped apart an Arizona defense that had no pass rush and few coverage answers other than its safeties. More offenses will do the same to the Cardinals.

Kansas City’s Week 2 game vs. the Chargers will be a different story. LA dominated the Raiders up front and the defense has good corners even without J.C. Jackson healthy.

When Mahomes is dueling Justin Herbert and other top passing QBs and the Chiefs play much better teams, a dangerous game plan-wrecker such as Hill will be missed more. Hill saved his biggest plays for the biggest games; now, one of those new wideouts must emerge. Watch out for the rookie Moore being that guy.

“The Patriots won’t ever give Bill Belichick another playoff team”

Counting out Belichick is much like counting out Rodgers and Tom Brady — it’s usually a mistake. But there’s no doubt he has a massive challenge ahead with a mess of an offensive scheme and a defense that isn’t as reliable against the pass. New England needs to run well with Damien Harris and Rhamondre Stevenson and then back it up with good situational defense that doesn’t allow big plays or easy scores.

MORE: By the numbers: Patriots sputter in Matt Patricia’s debut as play-caller

None of that happened in Sunday’s 20-7 loss at Miami. The numbers say Mac Jones was efficient, but he was ineffective. He opened his season in a sophomore slump before suffering a back injury. Belichick is a master of making necessary changes to maximize his team’s potential. He will need to be more creative than ever for these Patriots to earn a wild card.

Cincinnati didn’t lose 23-20 in overtime at home to Pittsburgh because of failures in the kicking game. Burrow throwing four interceptions — including a pick-six on his first attempt — and losing a fumble ensured the Bengals wouldn’t be worthy of winning in the end. It also was concerning that, despite efforts to improve the offensive line (again), Burrow was sacked seven times and managed only 5.6 yards per attempt.

Burrow, as per usual, got back on point throwing downfield to Ja’Marr Chase, checking down to Joe Mixon and getting others involved, even after No. 2 wideout Tee Higgins was lost to a concussion. Once the mistakes were out of the way, the 2022 Bengals looked much like the 2021 Bengals. They also got back into the game with well-rounded defense.

The Ravens are worthy new AFC North favorites, but the Bengals should still return to the playoffs. They don’t have a breather, however, as they try to get on the winning track. They’ll facing the Cowboys in Arlington in Week 2 after playing a full extra-time period in Week 1.

Jackson was inconsistent, and he wasn’t the highlight-reel scrambler he usually is. But when his team needed it, he threw three scoring lasers, two to track star Devin Duvernay and one to fellow young speedster Rashod Bateman. It’s almost as if Jackson was out there proving he can get it done as a pass-first QB like all the highest-paid QBs in the league. Jackson’s point in setting a contract deadline was making sure the market floor was established, which will allow him to go full speed ahead toward the ceiling.

Barkley’s bite was back. He showed no lingering injury issues as he turned 24 touches into 194 yards and a TD. He fueled the Giants’ thrilling 21-20 comeback victory at Tennessee, capped by his game-winning 2-point conversion burst. He easily stole the backfield show from homestanding Derrick Henry.

The Giants didn’t light it up in the passing game with Daniel Jones operating in Brian Daboll and Mike Kafka’s new, aggressive offense. But Jones spread the ball around and he played off Barkley’s effectiveness well enough to open up big plays for himself and others. Jones was still shaky overall, which makes it difficult to believe that New York (also see Washington with Carson Wentz) can hang with the established division powers in Dallas and Philadelphia.

The Titans don’t profile as an AFC playoff team in 2022, so the quality of the Giants’ opening win might be a bit inflated. That said, Big Blue has a good chance to be 2-0 before facing the Cowboys in Week 3; it has the Panthers at home in Week 2.

Mack had the ultimate revenge game against his first NFL team. He sacked 2014 draftmate Derek Carr three times and forced the game-clinching fumble in a nasty 24-19 win over the Raiders. Mack’s new edge-rushing mate, Joey Bosa, and a healthy Derwin James also got in on dropping Carr. Behind that pressure, linebacker Drue Tranquil and cornerbacks Asante Samuel Jr. and Bryce Callahan came up with big interceptions.

The Chargers proved they are loaded on every level for defensive-minded coach Brandon Staley. Still, they had to sweat out a Carr fourth-quarter comeback attempt because of Adams and Darren Waller doing damage downfield.

MORE: Latest on Keenan Allen, who left game vs. Raiders with hamstring injury

As great as a Mack-Bosa combination is, J.C. Jackson, the former Patriots playmaker, was the missing piece Sunday. His presence as the No. 1 outside cover man would have been welcomed. He could have helped to slow down an elite receiver such as Adams. If Jackson can return from an ankle injury soon — it’s unlikely to be Thursday vs. the Chiefs — he would give Staley more ways to thwart dangerous passing games. It will be scary to think how Super the Chargers are from front to back when that happens.