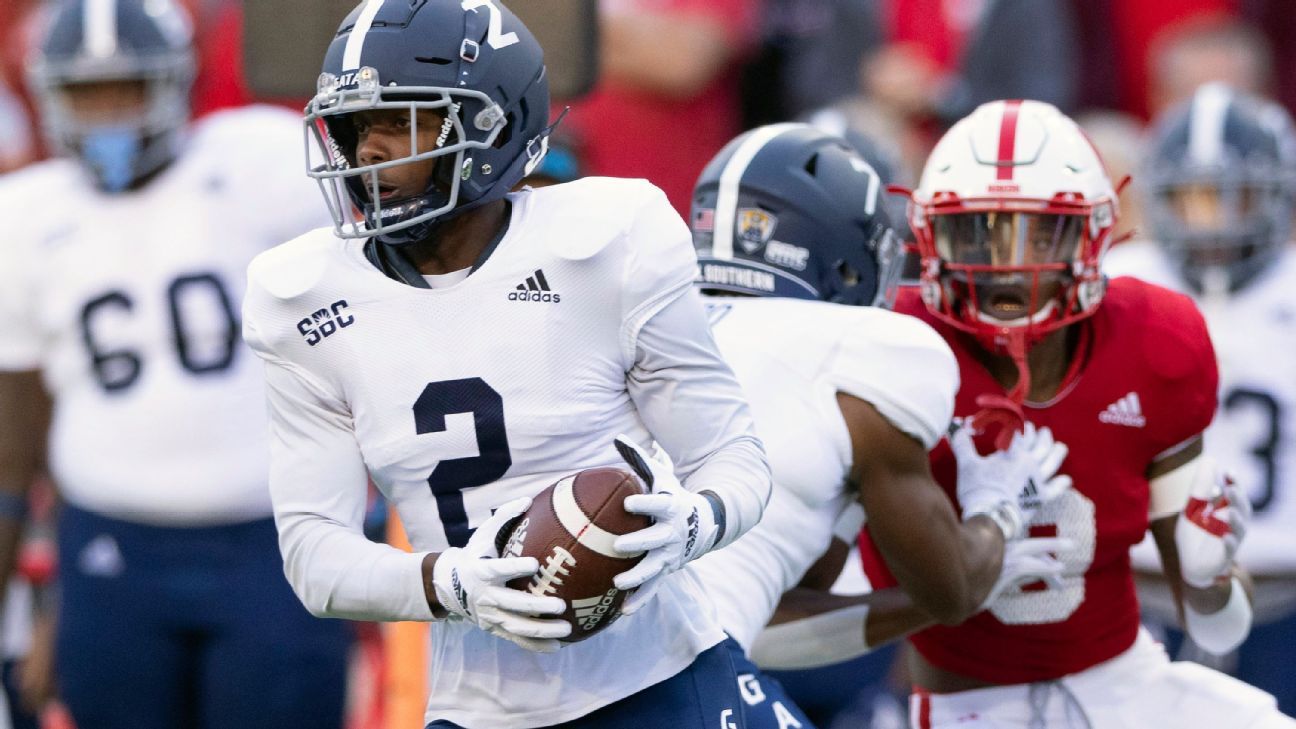 LINCOLN, Neb. — Kyle Vantrease scored on an 8-yard run with 36 seconds left after Nebraska had taken its first lead, and Georgia Southern defeated the three-touchdown-favorite Cornhuskers 45-42 on Saturday night.

The Huskers’ Timmy Bleekrode was wide left with a 52-yard field goal attempt as time ran out, and Georgia Southern players ran onto the field to celebrate the program’s first win in 13 games against Power Five opponents.

It was also the third major upset of the day from Sun Belt Conference programs. Before the Eagles worked their magic, Marshall upended Notre Dame and Appalachian State knocked off Texas A&M. All three wins were on the road.

The loss again turns up the pressure on embattled Nebraska coach Scott Frost, who now faces a home game next week against No. 7 Oklahoma.

“That one hurt,” Frost said. “We win as a team and lose as a team, and we got beat today. We got beat on schemes, and I didn’t really have an answer.

“They got after us.”

The Huskers (1-2) had come into the Georgia Southern game 214-0 when scoring at least 35 points at Memorial Stadium. The Eagles (2-0) piled up 642 yards, none bigger than the 75 they moved in 11 plays for the winning touchdown.

Vantrease converted a fourth-and-2 pass and threw 27 yards to Khaleb Hood before he took off up the middle on a designed quarterback run for the go-ahead score.

Casey Thompson moved the Huskers from their 23 to the Eagles’ 34 before Bleekrode pulled his field-goal try to the left.

Nebraska had taken the lead on Thompson’s 1-yard run with 3:05 left after Marques Buford’s second interception of the game turned back the Eagles as they tried to build on a three-point lead.

Thompson led the Huskers 98 yards in 15 plays. Thompson and Anthony Grant churned out yards on the ground and Marcus Washington made a catch at the 1 that was upheld on video review before Thompson went over the pile at the goal line.

The victory comes in only the second game for Georgia Southern coach Clay Helton, and it came almost a year to the day that Southern California fired him two games into his seventh season.

“I’m so proud of our boys,” Helton said.

Vantrease, who was quarterback for Buffalo when it lost at Nebraska last year, was 37 of 56 for 409 yards. Gerald Green ran for 132 yards and two touchdowns and Jalen Allen had 85 yards and two scores.

“They ran a lot of what we had already seen,” Frost said of Georgia Southern, “but I don’t think we won very many one-on-one matchups.”

The Eagles began the transition from the Championship Subdivision to the Bowl Subdivision in 2013, the same year they defeated Florida for their only other win over a Power Five team.