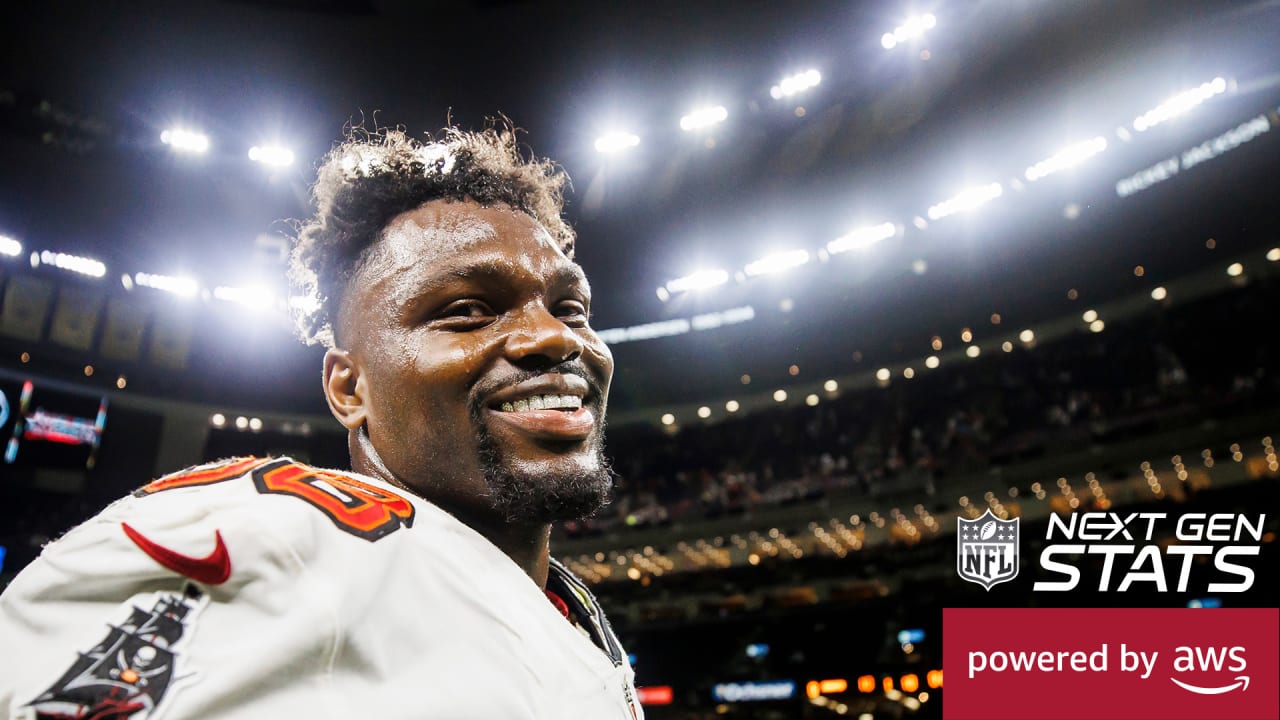 The Tampa Bay Buccaneers made life difficult for quarterback Jameis Winston in New Orleans on Sunday, dropping him for six sacks, hitting him a total of nine times and adding 11 pressures. This led to three interceptions and one fumble by Winston and, by the end of a 20-10 Tampa Bay victory, a 55.8 passer rating for the former Buccaneer.

Tampa Bay did not blitz Winston at a particularly high rate, especially given Todd Bowles’ usual level of aggression. The Buccaneers’ defense has had one of the league’s highest blitz rates over the past three seasons, since Bowles’ arrival in 2019, but they only brought more than four rushers on 11 of 46 dropbacks Sunday, 23.9% of the time, according to NFL Next Gen Stats. (All of the subsequent statistics are also courtesy of NGS.)

Both approaches worked. The Buccaneers rushed four defenders on 31 of Winston’s dropbacks and got two sacks on those plays. They brought five on nine snaps and also got two sacks with that tactic. And they dialed up six-man blitzes twice…resulting in exactly two sacks. (The other four snaps were three-man rushes.) All three of Winston’s interceptions came on straight four-man rushes and his passer rating on those 31 snaps was 55.2.

Outside linebacker Shaquil Barrett led the charge with 2.0 sacks, in the process moving into fifth place in franchise history in that category, with 39.5 QB takedowns since his arrival in 2019. That might seem like a much more productive game than Barrett had in the opener at Dallas, when he was held without a sack, but in reality he has been a menace in the opposing backfield since the opening bell this season.

While he wasn’t responsible for any of the four sacks the Bucs’ defense generated in Dallas, Barrett did pressure the quarterback six times, with a pressure rate on pass-rush snaps of 20.7%. That is the highest pass-rush rate that any Buccaneer defender has posted through two weeks in a single game (minimum of 15 pass-rush snaps). Barrett was quite literally in Dak Prescott’s face, as unfortunately it was his reaching hand that Prescott hit while releasing a pass, resulting in the wrist injury that currently has him sidelined.

In New Orleans, Barrett applied heat on the quarterback at a high rate once again, adding five more pressures. After two weeks, his 11 QB pressures are tied for second in the NFL, only one behind leader Myles Garrett of Cleveland. Barrett’s pressure rate on pass-rush snaps of 18.0% ranks 11th in the NFL among players with at least 24 such snaps.

Barrett has done all of this while also adding value in coverage on a not-insignificant percentage of plays. Among the same set of pass-rushers with at least 25 pass-rush snaps, Barrett ranks tied for sixth with 13 coverage snaps. Notably, his counterpart on the other end of the line, Joe Tryon-Shoyinka, is fourth on that list with 15 coverage snaps.

Barrett’s first sack of Winston on Sunday came on a long-developing play in which the quarterback scrambled up and to his left and was still looking to throw as he approached the line of scrimmage. Barrett hustled all the way around the backfield from his starting spot outside the right tackle and, with an all-out dive, hit Winston and swiped the ball out of his hand. The Saints were able to fall on the loose ball and prevent a turnover, but even without that one added to his tally Barrett has forced 16 turnovers by pressure on the quarterback since 2019. That’s the most in the NFL in that span. He also has the third-highest total of QB pressures in that span, with 205.