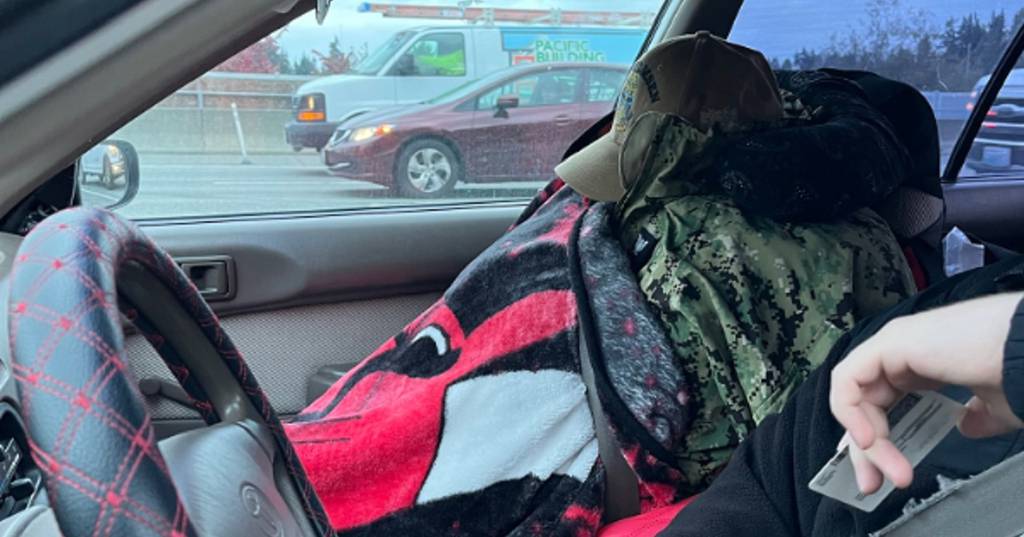 Life in the United States Navy, and the military in general, is anchored by the principles of adapting and overcoming.

So, what’s a Washington state-based sailor to do when plagued by the incessantly soul-crushing traffic north of Seattle? If you’re this particular Seaman Timmy, you take advantage of the I-5′s carpool lane.

More specifically, you ensure you qualify for said carpool lane by constructing a faux passenger out of a duffel bag, blankets, a USS Momsen ballcap and splashes of a Navy Working Uniform Type III.

And it all goes swimmingly, at least until 5-0 spots your squid dummy and scuttles what could have been a feat of Navy ingenuity.

Washington State Trooper Rick Johnson shared a photo of this very circumstance in a tweet Thursday.

The law enforcement officer did not respond to follow-up questions about the incident, but it appears to have taken place south of Everett, where the guided-missile destroyer Momsen is based.

“This HOV violator was contacted by an @wasstatepatrol motorcycle trooper SB I-5 near the King/Snohomish county line,” he wrote. “This ended up being constructed with a duffel bag and a lot of blankets. Apparently no excuse provided. #DuffelsDoNotCount.”

The identity of the clever, busted sailor has not been disclosed, but the photo does appear to show a petty officer 3rd class insignia on this sailor’s chest.

In Washington, a first HOV violation costs $186, but an additional $200 is tacked on “if a doll or dummy is placed in the car,” according to a state website.

Here’s to hoping this sailor isn’t smoked too harshly by his chief. Perhaps the sailor’s command could even concoct a way to properly channel such resourcefulness.

Geoff is a senior staff reporter for Military Times, focusing on the Navy. He covered Iraq and Afghanistan extensively and was most recently a reporter at the Chicago Tribune. He welcomes any and all kinds of tips at geoffz@militarytimes.com.