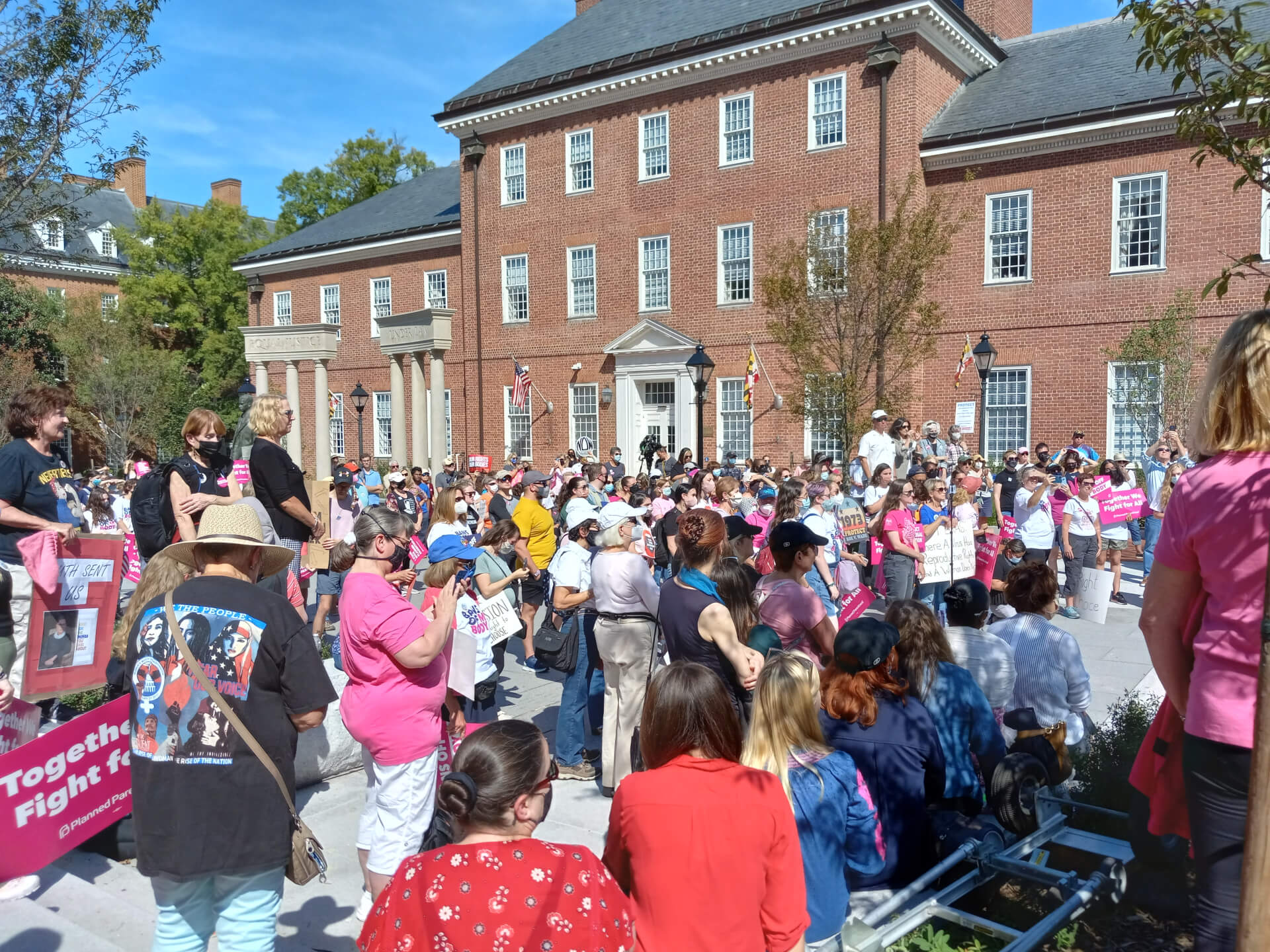 Now that most of the races have been called and we are beginning the process of reconciliation, can we talk about abortion access?

This year, the Maryland General Assembly passed the historic Abortion Care Access Act of 2022, brought forward by lead sponsors Sen. Delores Kelley and Del. Ariana Kelly. This key piece of legislation (with what turned out to be truly impeccable timing) was of course vetoed by Governor Hogan and later overridden by most in the Senate Democratic majority, with the exceptions of a couple Democrats who voted with Republicans in support of Hogan’s veto.

The Abortion Care Access Act of 2022 cannot be understated in its importance. As of July 1, qualified advanced practice clinicians — that’s nurse practitioners, nurse midwives, physician assistants — are eligible under the law to provide abortion care in Maryland. In a state with good abortion laws but huge abortion access gaps, this is an immediate fix that has already changed the landscape in Maryland for the better and modernized our laws to join 18 other states in allowing qualified non-physician care providers to provide abortion care.

Hogan’s undemocratic decision to withhold the $3.5 million in funds appropriated by our elected officials toward training new providers remains a boulder in truly implementing the spirit of the law. We cannot forgive or forget that Governor Hogan went out of his way to stop a historic abortion access bill from realizing its full potential just days after the Supreme Court overturned 50 years of precedent in Roe v. Wade.

Unfortunately, Governor Hogan is not the only one who has failed to act on key legislation. Many can be blamed for the failure to advance the Pregnant Person’s Freedom Act of 2022 (HB626/SB689) and the Constitutional Amendment Protecting Reproductive Liberty (HB1171) this past session, despite advocates warning lawmakers of what we anticipated would occur in the Jackson Women’s Health vs. Dobbs case that ultimately overturned Roe v. Wade this past June.

The Pregnant Person’s Freedom Act, sponsored by Del. Nicole Williams in the House of Delegates and Sen. Will Smith in the state Senate, would amend the criminal code to decriminalize an individual’s pregnancy outcomes. It is a commonsense measure aimed at protecting pregnant people from prosecution for miscarriages or self-managed abortion care in an unclear post-Roe legal landscape. Currently, our criminal code in Maryland actually gives room for individuals to be prosecuted for the outcomes of their pregnancies, including pregnancy loss outside of clinical settings.

Consider the tainted Supreme Court and a potential future GOP majority in Congress teaming up to forward a “personhood” law that would erroneously grant civil rights to fertilized eggs. This would cause an immediate legal crisis that would put Marylanders facing pregnancy loss in a very vulnerable situation. This is what we are up against. This dilemma cannot be meaningfully addressed by relying upon the discretion of individual district and state’s attorneys throughout Maryland. It must be codified through the law that all pregnancy outcomes in Maryland are decriminalized.

The anti-abortion propaganda machine caught wind of the Pregnant Person’s Freedom Act and began turning its wheels with the same, tired, disgusting, and baseless attacks they have levied for half a century. As an organizer in the abortion access and reproductive justice movement for more than half of my life and as the executive director of the only organization that organizes throughout the entire state in support of abortion access and reproductive freedom, I can tell you this without hesitation: Zealots who oppose abortion will always use the very same tactics and fire the same vile attacks to distract from their merciless political agenda to destroy the privacy rights of Marylanders and control if, when, and how someone becomes a parent, no matter what the measure is that is being put forth.

There is no compromise to be had, nor is there any appetite for anything close to it from the opposition. They will use their same inflammatory, long-debunked tactics to distract from the fact that they belong to a political movement that consistently votes against social safety nets to help Maryland families, that opposes universal healthcare, that opposes paid family leave, that opposes housing refugees, and that attacks and antagonizes transgender people. They have no solutions, only demagoguery, and we must see their tactics for what they are: a distraction.

The constitutional amendment (HB 1171) is another obvious and commonsense measure that should have passed last session and needs to pass right now. The bill was brought forth by House Speaker Adrienne Jones to codify the right to reproductive liberty into the state constitution and prohibit undue state interference in the pursuit of abortion and all reproductive healthcare. In such an unclear time, we need the strongest possible protections. There will never be a greater opportunity to amend our state constitution to enshrine the inalienable right of reproductive freedom than the opportunity in front of us now.

The ending of Roe protections is an absolute tragedy, an aberration, and the impacts of this historic blunder are only beginning to be realized across the country and in our state. It is not an existential threat anymore; Roe v. Wade is gone forever. It has been taken from us and will not return. What currently replaces Roe is a full-scale public health emergency that requires an all of the above solution and all of government effort.

Now that the primary election has largely ended, it’s time for the General Assembly to act swiftly to protect abortion access. We must work proactively to protect Marylanders from the dangerous and draconian whims of the unelected Supreme Court. The General Assembly must rise to the occasion and call a special session to immediately pass HB 1171 (Declaration of Rights Right to Reproductive Liberty) and HB626/SB689 (The Pregnant Person’s Freedom Act of 2022).

We cannot afford to give another moment of our time to those who consistently act in bad faith to stymie progress. The time is now to be bold on abortion access. There is a real opportunity for Maryland to truly lead the way in protecting and expanding abortion access in the nation, and it’s time for us to seize it.

Bring forward a special session immediately, pass these bills, and let the voters show us once again that Maryland supports reproductive freedom and abortion access in November.