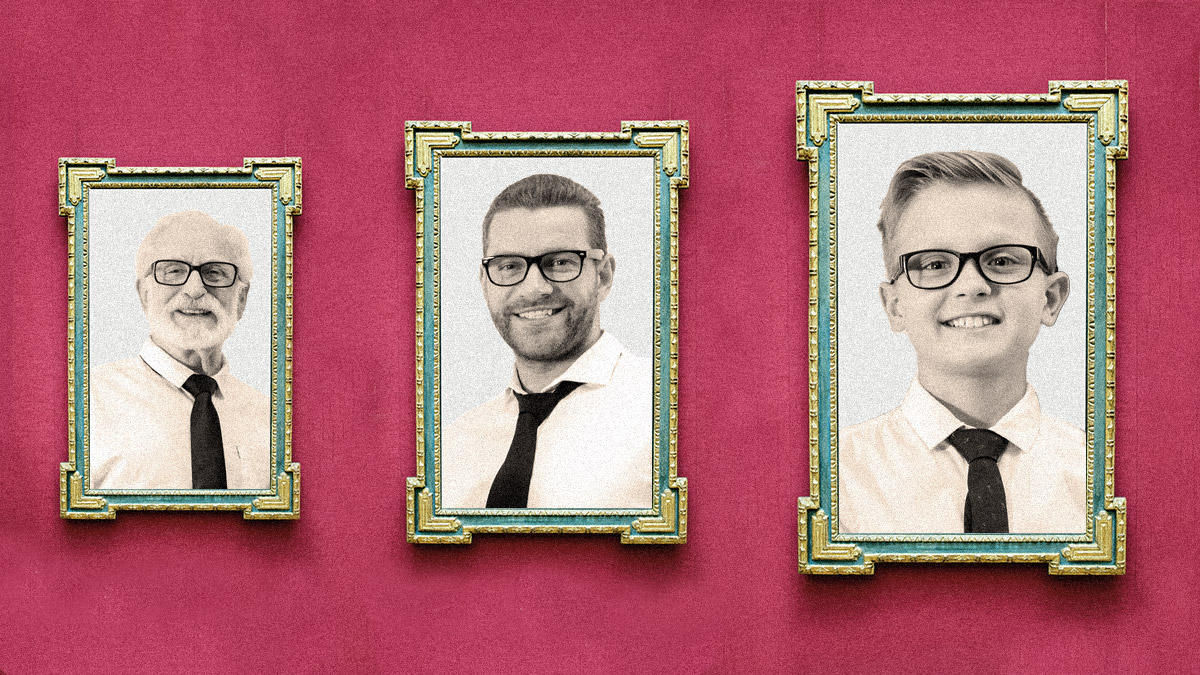 One of the most critical questions facing family businesses is how to treat the next generation. They are clearly different from other employees, as current or potential owners of the company, whose wealth and reputation are on the line. On the flip side, most parents rightfully worry that providing too many unearned advantages undermines not only the next generation’s work ethic, but the soul of the company. In answering this question, families often default to one extreme or another: giving the next generation special treatment that doesn’t hold them accountable to the same standards as other employees (the “inherit model”) or requiring them to earn everything they get (the “merit model”). This article describes a path that blends elements of both, and which is far more likely to set family members up to succeed.

“Some people are born on third base and go through life thinking they hit a triple.” This quote, often attributed to NFL football coach Barry Switzer, perfectly captures what many people think about family businesses. Family members are given jobs, promotions, and salaries that they would never have achieved without their name being on the front door. As one non-family executive put it, “He’s the COO of the company — the child of the owner.”

One of the most critical questions facing family businesses is how to treat the next generation. They are clearly different from other employees, as current or potential owners of the company, whose wealth and reputation are on the line. On the flip side, most parents rightfully worry that providing too many unearned advantages undermines not only the next generation’s work ethic, but the soul of the company. In answering this question, families often default to one extreme or another: giving the next generation special treatment that doesn’t hold them accountable to the same standards as other employees (the “inherit model”) or requiring them to earn everything they get (the “merit model”). In my experience, a path that blends elements of both is far more likely to set family members up to succeed.

The Risks of Inherit or Merit

When roles are given rather than earned, it often creates an attitude of entitlement, exemplified well by Cho Hyun-Ah, the daughter of the CEO of Korean Air who, “famously flew into a rage when macadamia nuts were served to her in a bag and not on a plate on a Seoul-bound flight from New York in December 2014.” When family members wield their privilege this way, the impact on the company is destructive. Even more subtle signs of entitlement, such as showing up late to work or taking lengthy vacations to exotic locations, will undermine the corporate culture.

In light of these dangers, the temptation can be to remove the role of inheritance from the company altogether and make family members earn not only their job, but even their ownership in the company. This merit model can seem appealing, but it also brings real risks with it. Pitting family members against each other in a kind of talent horse race can create sides within an organization, potentially even splitting it up, which is what happened when such a sibling rivalry led the Dassler brothers to separate their company, Sportfarbrik Gebrüder Dassler (Geda for short), into two competing companies, Adidas and Puma.

Forcing family members to earn their ownership may make them feel compelled to work for the company even when it’s not a good fit for them. These “golden handcuffs” can have a negative impact both on that individual and, because of their dissatisfaction with being there, the broader company. And when someone does choose to leave, the company’s resources may need to be diverted away from investing for growth and toward funding the buyout of their shares.

So, at the extreme, neither the inherit nor merit models are viable. A successful family business needs some of both. There are three main actions you can take to find the right balance.

1. Differentiate between compensation and dividends.

This line is often blurred in family businesses. Family members may receive money that both reflects their day-to-day job responsibilities (compensation) as well as their equity stake in the company (dividends). Often this jumbling is driven by tax efficiencies. One family business pays everything out as compensation because their corporate structure results in dividends being taxed twice. A different family business does the opposite, paying very low salaries but high dividends because of the comparatively favorable tax treatment. Another driver of this boundary blurring is the impulse for equality, under the presumption that treating everyone the same is fair. In many cases, family members are given the same amount of money irrespective of their roles, or sometimes even whether or not they actually work in the company.

When the contributions of family members are roughly equal, then there’s no problem. Figure out what is a reasonable amount to pay family members for their jobs and invested capital and distribute that amount in the most tax-efficient way possible. However, this level of symmetry is rarely the case beyond the first or second generation. It’s far more likely that capabilities and passion for the business will be uneven across the family. In such situations, a one-size-fits-all approach will likely result in feelings of resentment (“I’m doing so much more, why should we get the same?”) and entitlement (“We both own 50% of the company, why should she get more?”).

The best way to address these issues is to develop separate systems for calculating what family members receive as compensation and dividends. Compensation should be driven by merit — it should reflect the market value of the role performed. Some families pay slightly above market rates to encourage family members to work in the business; others pay slightly less to discourage them. But the core principle stands. Someone who is serving as CFO is worth more to the company than an entry-level salesperson. Their compensation should reflect this reality.

Another reality is that the owners of a company deserve some return on their investment. If the only way to get a financial benefit from the business is to work there, then you’ve slapped the golden handcuffs on. Instead, develop a dividend policy. That could mean paying a set amount each year, a percentage of equity or profits, or whatever remains after paying the bills and funding necessary reinvestment. Dividends should be based on the “inherit” model — if we are cousins who all were gifted our parents’ equal shareholding, but you are an only child and I have two siblings, you will receive three times more of the dividend pool. Differentiating compensation from dividends is essential to finding the merit/inherit balance.

2. Clarify the decisions that come from management from those that accompany ownership.

In one family business, two siblings had taken over leadership from their father, who founded the company. They made all decisions — everything from operational to strategic — by consensus. The employees had learned a simple rule for making sure there was buy-in on their requests, big or small: “Ask the owners.” This approach worked because they were both heavily involved in all aspects of the business.

As they looked ahead to the next generation, it became clear that a different approach would be needed. Among their seven combined children, three worked in the business and four did not (with no plans to join). Not only did decisions by seven people seem daunting, but how could those who did not work in the company make informed choices about hiring employees or changing prices? At the same time, if those who were working in the company made all the decisions, how was that fair to the four people who combined owned more than half of the equity? Surely, they should have influence in some decisions. But not in a way that ground the company to a halt.

The path out of this dilemma was to distinguish the decisions that come from the merit and inherit models. The siblings created a list of all the decisions they had been making about the company. They then split them into three categories: 1) decisions that should be made by those in management (e.g., hiring a new regional sales manager); 2) decisions that should be made by the owners (e.g., paying out a dividend); and 3) decisions where those in management should make a recommendation, but the owners should approve or reject it (e.g., making an acquisition). Taking the time to develop this “decision-authority matrix” helped position the next generation to find the right balance between merit and inherit.

3. Create a family culture that recognizes the importance of both active involvement and passive shareholding.

There is a tendency to glorify the role of the “wealth creator” in a family business. At one of my seminars, a family CEO raised his hand and asked the question: “If I’m the one creating all the wealth, why should I share it with my two siblings, who are not even working in the company?” It’s an understandable question, to be sure. But the flaw in it became clear to him when he was asked in response: “What would you do if you had to buy out your siblings’ equity in the company?” He said that he would have to take one of three actions: borrow a ton of money from the bank; divert the company’s profits for the foreseeable future to fund buyouts; or take on other equity partners who might be much more demanding than his siblings. Since none of those options was the least bit appealing, he came to the realization that his siblings were bringing something valuable to the table: their willingness to keep their money invested in a business that he ran.

The value of passive shareholding is one of the most underappreciated contributions to a family business. Growing through retained earnings is one of the surest paths to long-term success, especially in comparison to high rates of borrowing or equity partners who will demand an exit to recoup their investment. So long as the demands of the shareholders who don’t work in the business are reasonable and their actions are not too distracting, keeping their money in the company is a tremendous benefit. If those working in the company do a good job of running it and those who are not take the long view and leave most of their money invested, then there should be more than enough to go around. Place value on both of these levers of contribution. The passive shareholders should express their gratitude for the hard work of those working in the company (and reward them financially through market-based compensation). And those working in the company should show respect to their investors in their communication (and be generating good dividends).

The extreme versions of nepotism and meritocracy will lead most family businesses to ruin. Instead, differentiate compensation from dividends, distinguish management from ownership decisions, and place value on the contributions of both active involvement and passive shareholding. By doing so, you will find the right balance between merit and inherit.