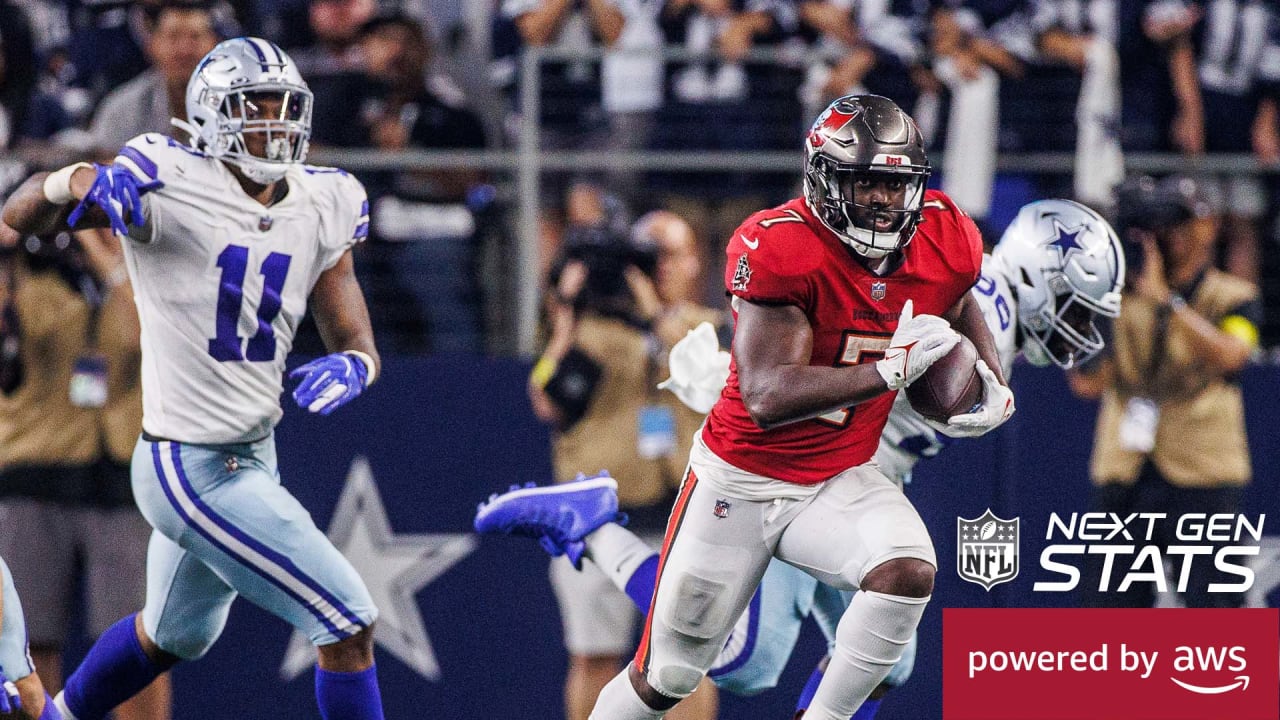 Leonard Fournette had one of his best games as a Tampa Bay Buccaneer in Sunday night’s season-opening win in Dallas, and as Team Writer Brianna Dix noted in her takeaways from the game, he found a lot of success running behind pulling guards and centers. More often than not, those moving blockers were rumbling to their left.

Fournette ran for 127 yards on 21 carries against the Cowboys, ending with a neat 6.05 yards per attempt. According to NFL Next Gen Stats, 85 of those yards came on 10 carries outside the left tackle. (All of the subsequent statistics will also be courtesy of Next Gen Stats.) That’s compared to 26 yards on six tries inside the left tackle, 11 yards on three runs inside the right tackle and five yards on two carries outside the right tackle.

Obviously, that speaks well for left tackles Donovan Smith and Josh Wells (Smith left with an elbow injury midway through the second quarter), as well as rookie left guard Luke Goedeke and the other blockers who were pulling on the play. It was also a nice performance by the Buccaneers’ tight ends, Cameron Brate (42 plays), Cade Otton (30 plays) and Ko Kieft (16), because 71.4% of Fournette’s runs were to the strong side of an unbalanced line.

Fournette benefited from good blocking by all of those players, as indicated by the fact that he averaged 3.0 yards per carry before contact. That tied for second among NFL running backs with at least 10 carries in Week One; only the Giants’ Saquon Barkley, with 4.3 per carry, got further downfield before being hit. Fournette got some nice seams to hit and he made them count by getting to them quickly and getting up to top speed in a hurry.

That’s demonstrated by Fournette’s average speed by the time he reached the line of scrimmage, which was clocked at 11.53 miles per hour. The only backs with 10-plus carries who built up more speed by the time they reached the line were the Cowboys’ Ezekiel Elliott (12.40) and Barkley (11.53). Fournette also got up to 15 miles per hour or more on 23.8% of his carries, which was sixth among all qualifying backs.

The result was a lot of plays that moved the chains, which was particularly helpful in the second half when the Buccaneers were leading by 16 points and happy to keep the clock running and keep the ball in Tom Brady’s hands. Fournette finished the game with six carries of 10 or more yards, which was the most by any player in the league in Week One. Of his 21 carries, 28.6% went for double-digit yards, the second-best percentage of the weekend.

The Bucs accomplished this in the ground game without frequently having to sacrifice extra targets for Brady to add to the blocking scheme. On Fournette’s carries, the Buccaneers’ offense had an average of 6.76 blockers in the box, which was only the ninth-highest average in the NFL. As a contrasting example, Kansas City rookie back Isaiah Pacheco, who had a nice debut with 62 yards on 12 carries, had an average of 7.42 blockers in the box when he ran. The Bucs’ schemes generally achieved a hat on every hat, as Fournette faced an average of 6.95 defenders in the box on his runs. On 71.4% of his total carries, the Bucs’ lead back had the advantage of at least as many blockers as defenders in the box.

All told, it was a well-schemed and well-executed rushing attack that was exploited well by a powerful back who hit the holes early and got up to top speed quickly. It’s a blueprint that could give the Buccaneers a better rushing attack and a more balanced offense than they’ve had in recent years.