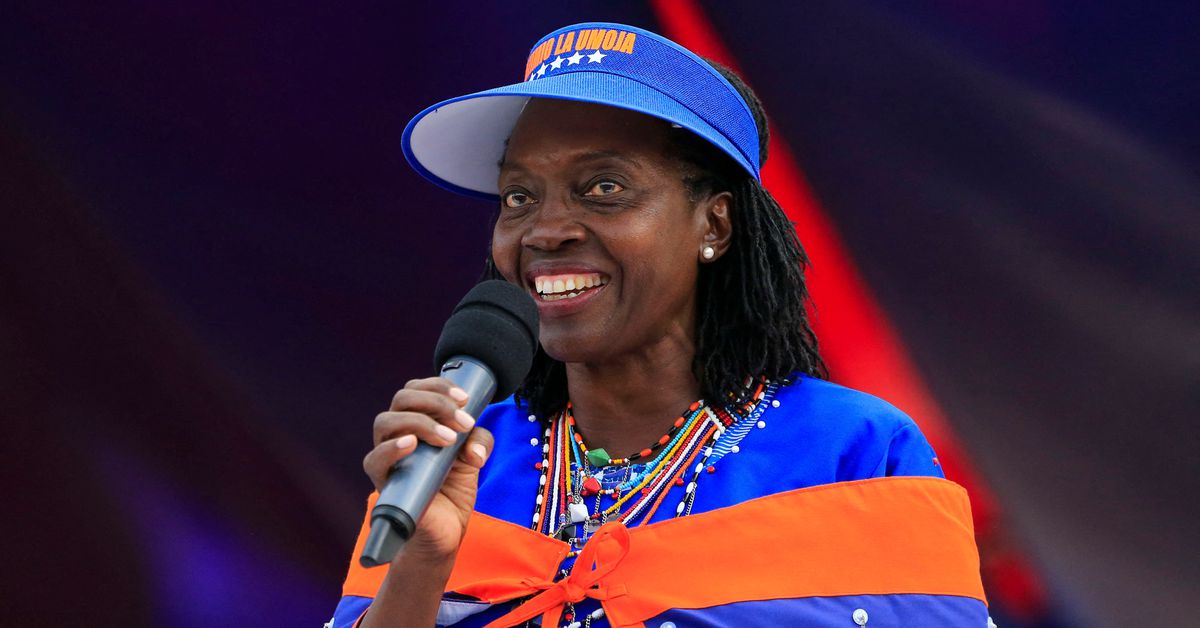 MOMBASA, Kenya Aug 9 (Reuters) – As Kenyans await the outcome of Tuesday’s election, they are wondering if Martha Karua might be their first female vice president, becoming the highest ranking woman in the history of a country where female candidates are often physically attacked.

The two head the Azimio La Umoja (One Kenya Alliance) coalition and faced off against Deputy President William Ruto and lawmaker Rigathi Gachagua, both men, in the Aug. 9 presidential, legislative and local elections. read more

Provisional results start trickling in on Tuesday night but an official outcome will take days.

The elections are seen as a key test for stability in East Africa’s biggest economy, after two of its three last polls were marred by violence following disputes over alleged rigging.

Karua has said Azimio’s priority would be to stamp out corruption, estimated to cost the government a third of its budget every year, about 800 billion shillings ($6.8 billion). She said Azimio also wants closer scrutiny of private wealth of public sector workers and political leaders.

The recovered money would fund her coalition’s plan to offer direct monthly support to 2 million of Kenya’s poorest people.

“Corruption is strangling or choking the nation,” she said.

Angeline Koome, a primary school teacher in the southeastern port city of Mombasa, said she had decided not to vote but changed her mind when Odinga made Karua his running mate.

“It was a breath of fresh air to have such a woman who is not only smart and forward thinking but also very dedicated to good leadership. Kenya is safe with her as deputy president,” Koome told Reuters.

“She is very tough and for the first time in a long time, I believe we as a country are winning the war on corruption which has been our biggest disaster.”

Odinga has also designated Karua as his justice minister if they win, capitalising on her reputation for standing up to power. As a lawyer in the early 1990s, Karua said she helped lay the ground for Kenya’s constitutional charter and fought for multi-party democracy.

In 2001, she defiantly walked out of a rally by former authoritarian president Daniel arap Moi after she was denied a chance to speak.

She also resigned from the government in 2009, citing differences with then president Mwai Kibaki on human rights, tackling corruption and judicial appointments.

But Karua has dismissed her nickname “Iron Lady” as a sexist trope, telling Reuters in a June interview that “strong leadership in women is seen as an exception”.

Women are under-represented in Kenyan politics and frequently face violence: a parliamentary group said there had been dozens of attacks on women candidates this election cycle. read more

“She will turn tables. The next generation will be lucky to have her at the helm, and yet I am a man, so imagine what other women are feeling,” Martin Anyanga, a businessman in Mombasa, said of Karua.

Karua has also promised to rein in public debt, which has more than tripled by 7 trillion shillings ($61.3 billion) since Kenyatta assumed office in 2013, pushing against the nation’s debt ceiling.