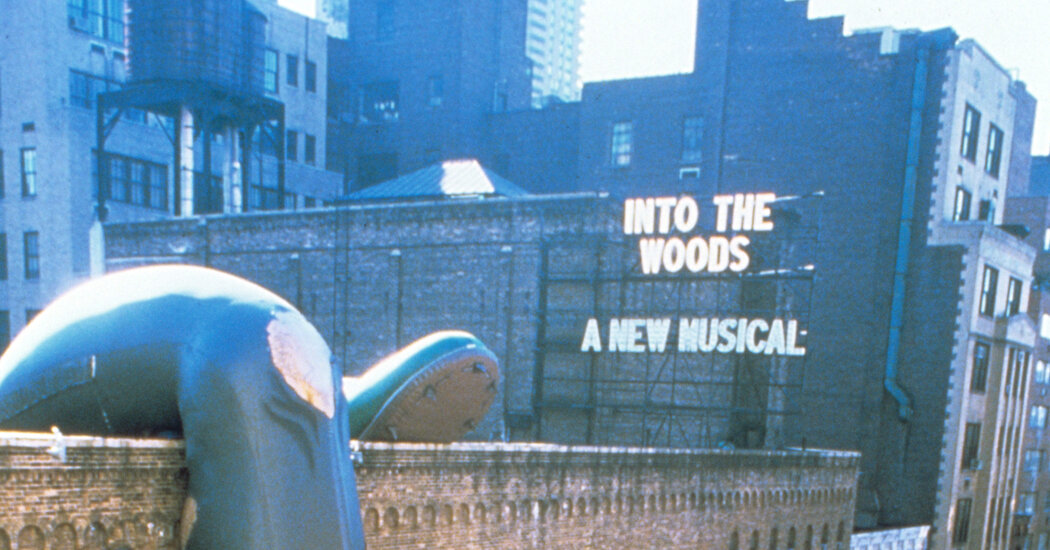 Good morning. It’s Wednesday. Scroll down for a look at when a plane smashed into the Empire State Building — 77 years ago today. But first, a Broadway mystery.

The producers of the revival of “Into the Woods,” the Stephen Sondheim-James Lapine musical, have a wish. It is to locate a something you might call a prop from the original production. It is missing.

It is a giant inflatable boot with a long vinyl leg attached.

The boot was a fixture when “Into the Woods” opened in 1987. It was anchored to what was then the Martin Beck Theater (now the Al Hirschfeld). “The boot was like a beacon,” said Jordan Roth, the lead producer of the current revival at the St. James, which is extending its run to Oct. 16. “It was literally the beacon that called us all to the theater. I think why it captured our imagination was the way it really physicalized this impossible balance of the show between whimsy and weight.”

Michael David, the executive producer for the original run, said there was a more practical concern. The theater, an “outlier” west of Eighth Avenue, had not had a long-running show in some time when “Into the Woods” arrived, he said. The boot gave the theater an identity “to help people find us, not where they’d think ‘what is the address’ but ‘the one with the boot above it.’”

When “Into the Woods” closed in 1989, the boot went into storage. It came out for a revival in 2002, this time at the Broadhurst Theater.

The mystery is what happened to the boot when that production closed after 18 previews and 279 performances.

“It’s in storage — I just don’t know where in storage,” David said, adding that there were two facilities in New Jersey still to be checked.

The boot, which conjured up the giant who creates mayhem in the story, was the work of Ann Slavit, who had done a 30-foot-tall pair of red shoes that hung on the Brooklyn Academy of Music as a tribute to the celebrated ballet movie “The Red Shoes.”

“I don’t think Michael David said to me, ‘Oh, can you do a boot?’” she said. “Maybe we were talking about the giant and I thought, ‘You never see him in the show so we could have this ominous presence.’” There was a second shoe that looked as if it was coming over the parapet of the theater.

She said she suspected it had been discarded after it was taken off the Broadhurst on a day with particularly bad winter weather.

But Chic Silber, a special effects designer who was involved in installing and removing it at the Broadhurst in 2002, said it was “neither destroyed nor thrown out” when it came down. But it had been cut into at least a couple of pieces. “What happened to either half after that, I don’t know,” he said.

Roth, the lead producer of the revival, put out an all-points bulletin for the boot almost as soon as the arrangements to move “Into the Woods” into the St. James were completed in late spring. He recalled seeing the boot the first time he saw “Into the Woods,” as a 12-year-old in 1988, with Phylicia Rashad in the cast. If it were found and mounted on the St. James, he said, “the knee would bend right above my office window.”

But Silber had advice for Roth: Call off the search.

“Even if it could be found,” he said, “there is no way it would inflate again and work on the roof of any building.” And making a new boot would cost far less, he said.

In effect until Aug. 15 (Feast of the Assumption).

The day a plane hit the Empire State Building

Fourteen people were killed: The pilot, Lt. Col. William Smith Jr., and the two others aboard his Army B-25, and 11 in what was then the world’s tallest building. Burning fuel rained down an elevator shaft after the fuel tanks exploded. An engine and part of the landing gear tumbled into a subbasement.

Smith had been scheduled to fly to La Guardia Airport, but as he approached, he said he wanted to land at Newark. The change sent Smith’s unarmed training plane over Manhattan and into the 78th and 79th floors of the Empire State Building. A government investigation later concluded that he had “erred in judgment” and should not have been cleared to proceed.

Up in the Empire State Building, where clouds sometimes drifted into the not-yet air-conditioned offices, the roar of the two propeller-driven engines became louder as the B-25 cruised along. And then it hit.

One of them was Ernie Sisto of The New York Times, who talked his way past the police officers on the street and rode to the 67th floor in an elevator that was still in operation. He then took the stairs, finding a vantage point above the 79th floor.

There, he dangled over the parapet after asking two competing photographers to hold his legs. He repaid the favor by snapping shots for them, along with the photograph above.

Therese Fortier Willig, a secretary in the Catholic War Relief office on the 79th floor, huddled with co-workers. She recalled in 1995 that she was so upset that she yanked off the rings she was wearing and hurled them out the window. One was her high-school graduation ring, the other a friendship ring from her boyfriend, whom she never expected to see again.

She eventually escaped, and firefighters not only discovered the rings in the debris on the street, they tracked her down and gave them back. She married the man who had given her the friendship ring and had a son — George Willig, who climbed the World Trade Center in the 1970s.

“She hardly ever talked about it, kind of like I hardly ever talk about climbing the World Trade Center,” he said this week. “After a while your life goes on, it’s part of your history.”

As an original subscriber to City Center’s Encores! series, I was thrilled to attend the eagerly anticipated reopening after a two-year hiatus.

Subscribers generally know all the audience members who sit near them, so there’s a bit of a buzz when someone new appears. And at a February performance of “The Tap Dance Kid,” everyone in my row noticed a new face in the row in front of us.

As the standard announcement was made about the rules against taking photographs and videos and using phones, this woman took out her phone and appeared to start texting.

The orchestra began to play, and the audience applauded. The light from the phone was still visible. I was about to tap her on her shoulder and ask her to turn off the phone, when the person beside her turned to her.

“Please turn that phone off,” he said.

Glad we could get together here. See you tomorrow. — J.B.

P.S. Here’s today’s Mini Crossword and Spelling Bee. You can find all our puzzles here.

Melissa Guerrero and Ed Shanahan contributed to New York Today. You can reach the team at nytoday@nytimes.com.

Sign up here to get this newsletter in your inbox.