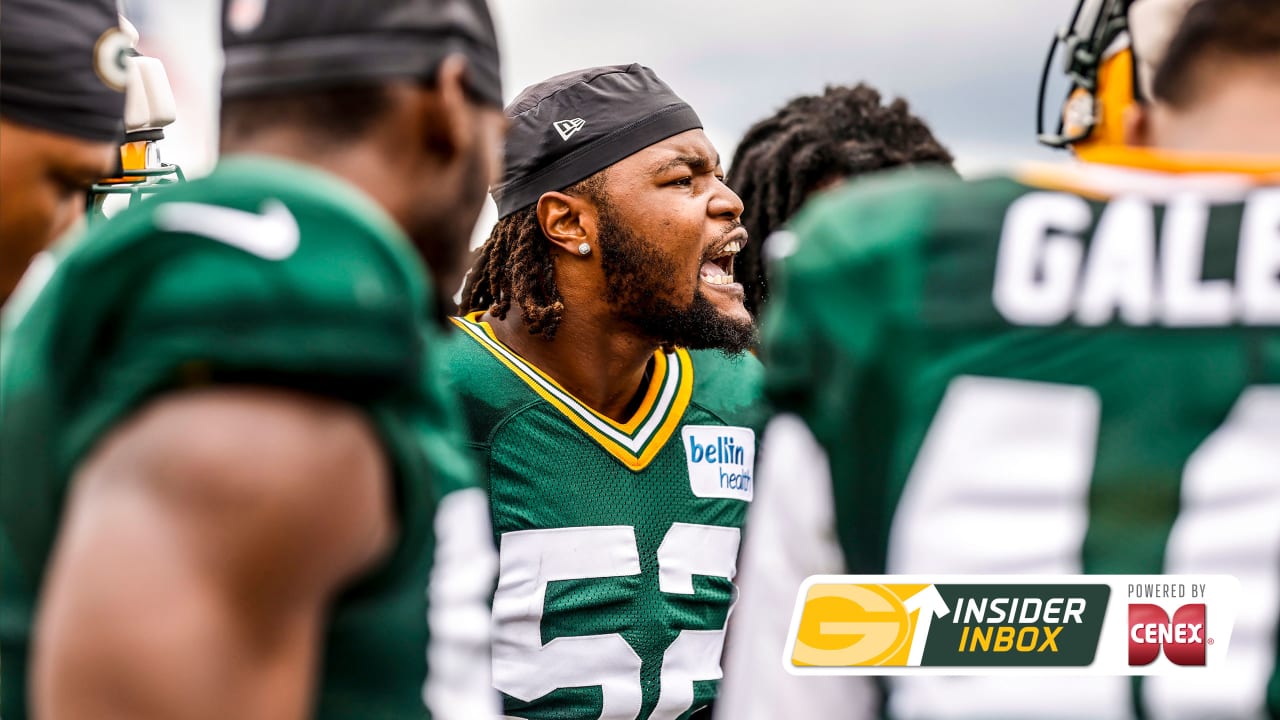 Do the Packers have an X factor you could point to that no other NFL teams have other than AR12?

The Packers have one of the best all-around backfields in the NFL with Aaron Jones and AJ Dillon when you factor in how effective both running backs are in the passing game.

Hello, I am excited about our defense this season and beyond for that matter, we have consistently been adding top young talent over the last few years and it appears to be coming together. When was the last time the defense was the stronger part of the Packers’ three phases and is this contributing to making the special teams better?

Probably 2010. Rodgers was great but he wasn’t an MVP yet. I do think there’s a correlation between a strong defense and good special teams. The Packers had a good core of specialists that year with Jarrett Bush, Charlie Peprah and Pat Lee.

George from Kennebunkport, ME

Last week I saw a clip from Packers practice on the NFL Network that looked unusual. The clip showed a play where Aaron Rodgers had the ball pitched to him as he was sprinting to his left followed by him passing the ball. They showed them running this play multiple times. Having watched every Packers play for decades I do not recall seeing this play design. Is this a new wrinkle or maybe just a “head fake” to force defenses to plan/practice defending it?

It’s not a designed play. Team periods are restricted. What you saw is an individual drill that works on play-action rollouts. It’s been a standard drill under LaFleur.

The discussion of the call on the Shemar Jean-Charles pick prompted me to wonder who the practice refs are. Are they current or perhaps recently retired NFL refs? College or maybe high school?

They are retired area referees. The NFL officials should be coming in this week, though. At least, the Packers have historically had them here for Family Night.

Ryan from Noblesville, IN

Do y’all have access to the same cafeteria as the players? If so, how is the food? If not, I think y’all should ask for access to help with Mike’s stamina.

I ate a salad from 1919 Monday. I think Spoff had yogurt.

Good morning, Wes. Last week, Aaron Rodgers had some straight-faced fun with the concept of “going from Hall of Famer to Hall of Famer.” Well, it’s all fun and games until we have to alternate between Mike and Wes every day. The Inbox just has a different tone. Mike likes his PUP and salary cap questions while Wes is more about the human-interest side of the team. How should a bewildered reader decide which HoFer to ask what question? Thanks.

Weston, based on the live tweets youse guys and gals are providing, the disruptive speed of the defense seems to be a common theme…and how is the mustache coming?

Good morning gentlemen! My question is with the pads going on the potential for injuries increases, does that hold true for yous guys? I’m concerned Wes will pull a hammy and Spoff will find himself in the concussion protocol over stealing his last lunch?

We’re ready. The ramp-up period was for players and media alike. Buckle up, it’s time to get to work.