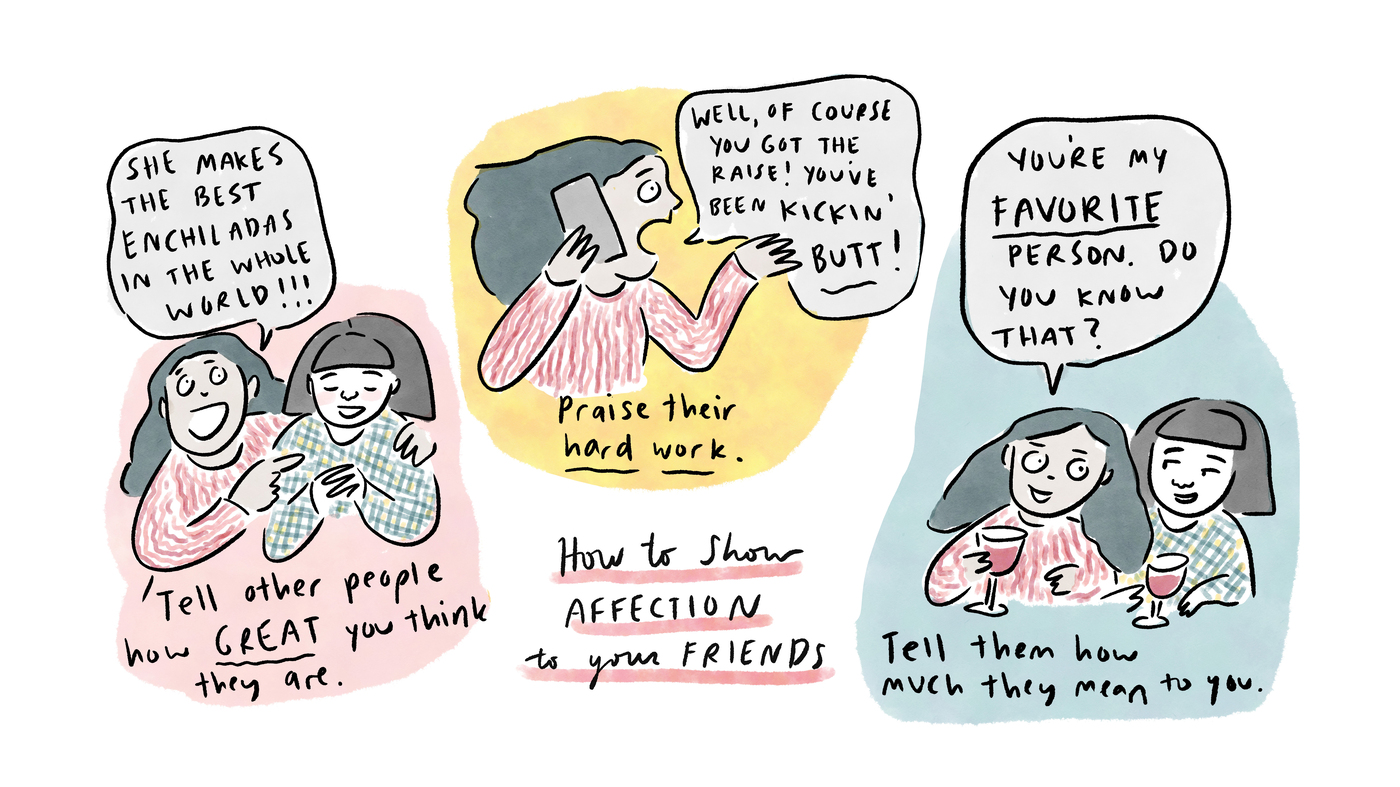 When psychologist and friendship expert Marisa Franco went through a rough breakup in 2015, she felt like she had no more love in her life. So Franco leaned on her friends for support. They did yoga, cooked and read together. As she and her friends grew closer, she realized they were a deep well of love, community and healing. And she began to understand the importance of non-romantic, non-family relationships.

Now, Franco wants to help others experience that profound level of friendship too. Her new book, Platonic: How the Science of Attachment Can Help You Make — and Keep — Friends, which came out this month, offers insights on how to improve the quality of our platonic relationships using the latest research on human connection. She talks to Life Kit about how to deepen those bonds and find happiness and fulfillment in the process.

Marisa Franco, Ph.D. is a psychologist, friendship expert the author of Platonic: How the Science of Attachment Can Help You Make — and Keep — Friends.

“It takes an entire community for us to feel whole,” writes Franco in her book. Psychologists have long theorized that humans need meaningful social connections to survive. In fact, it’s linked to our mental and physical wellbeing. Knowing that we have people to lean on and care for us makes us feel confident and assured.

And the stronger our relationships are, the more likely we are to thrive, she adds. So how do we intensify the existing friendships in our lives? Franco offers four tips, based on her research.

1. Shower them with (platonic) affection

We often think of affection as the sort of love we show in romantic relationships. But affection is more than holding hands and kissing. It’s about communicating love and appreciation.

There are many ways you can show platonic love to your friends, says Franco. Tell them how much they mean to you. Tell them when you think of them in passing. Remind them you are grateful to know them. These simple acts provide a layer of security in the relationship. It shows your friends that you genuinely care for them and lets them know it’s safe to invest in your friendship.

It might feel strange to show affection to a friend, she says, because unlike romantic relationships, platonic relationships often lack a script for explicit declarations of love. But research has shown that these displays of affection are much appreciated.

A 2018 study published in the journal Psychological Science asked people to write letters of gratitude to someone in their life and rate how they would be received. The participants consistently overestimated how awkward the recipient would feel and underestimated how happy it made them.

However, cautions Franco, it’s important to understand people’s different levels of comfort when it comes to affection. Maybe one of your friends, for example, hates hugs but loves compliments. So talk to your friends and figure out their friendship love language, she says. Ask them: “How would you like me to show you that I really value you?”

2. Lavish them with your skills and talents

Being generous with your friends — sharing your time, attention or resources with them — is an easy way to nurture your friendships, says Franco. It’s an expression of love that shows you want to invest more in the relationship.

“People want to be and stay friends with people who value them, and generosity is a way to express that,” Franco says. And there’s science that shows it pays off — a 2019 study in the journal Frontiers in Psychology found that junior and high school students who exhibited traits like generosity and empathy were more likely to build deep, long-lasting friendships than students who didn’t identify with those characteristics.

Franco suggests a personal approach. “Think about what your skills and talents are and find a way to turn that into a generous act,” she says. For example, when she found out that her friends wanted to learn more about how to set up investment accounts, she used her research and analysis skills as a psychologist to put together a presentation on the topic for them.

You can share acts of generosity like this with your friends, too. If you’re great with kids, you might offer to babysit for your friends who are parents. If you’re a gym rat, you could help your friend train for a race they have coming up. Or if you got a raise at work, treat your friends to a fancy dinner to celebrate.

Think about how good it feels to tell a friend you secretly like a trashy TV show and hear them respond “me too!” We feel a deeper connection to our friends when our vulnerability is met with validation and support, says Franco. It means they accept us for who we really are, the good and the bad.

It can be scary to be open with our feelings. It can come with the risk of shame or rejection. But research has shown that people are a lot less likely to reject you for being vulnerable than you think.

A study published by the American Sociological Association asked strangers to disclose varying levels of intimate information with a group of women. The researchers found that the more open the strangers were, the more the women liked them. “When someone’s vulnerable with you, it indicates they trust you,” says Franco.

So don’t be afraid to share your struggles with your friends, whether it’s an ex you’re having trouble getting over or a new job you’re having second thoughts about. They’re not going to judge you — and it may bring you closer.

If you’re looking for a way to let your guard down without divulging your darkest secrets, Franco suggests sharing something positive, like a personal achievement — maybe you just finished sewing your first quilt, or you broke your own time record on a run.

4. Don’t sweep your disagreements under the rug

It’s hard to deal with conflict in friendships, says Franco. People often see them as something that’s supposed to be fun and lighthearted, or less formal than romantic or family relationships, so they downplay problems when they arise, she adds.

But being able to deal with conflict with friends in a healthy, constructive way can strengthen your friendships, she says. It might be painful at first, but it shows you want to be authentic with them — and that you want to make your relationship better.

In fact, research has shown that conflict is “actually linked to deeper intimacy,” says Franco. A study in the Journal of Social and Personal Relationships asked 273 participants to share a time when they felt hurt or angry when someone mishandled their private information. Those who were able to work out the problem with the people involved said that it improved their relationships.

So if you have an issue with a friend, don’t sweep it under the rug. Try talking about it. Here are some tips:

While conflict might be uncomfortable at first, Franco says it’s something to embrace. “It allows us to illuminate each other on how to be better for each other, forever enhancing a friendship.”