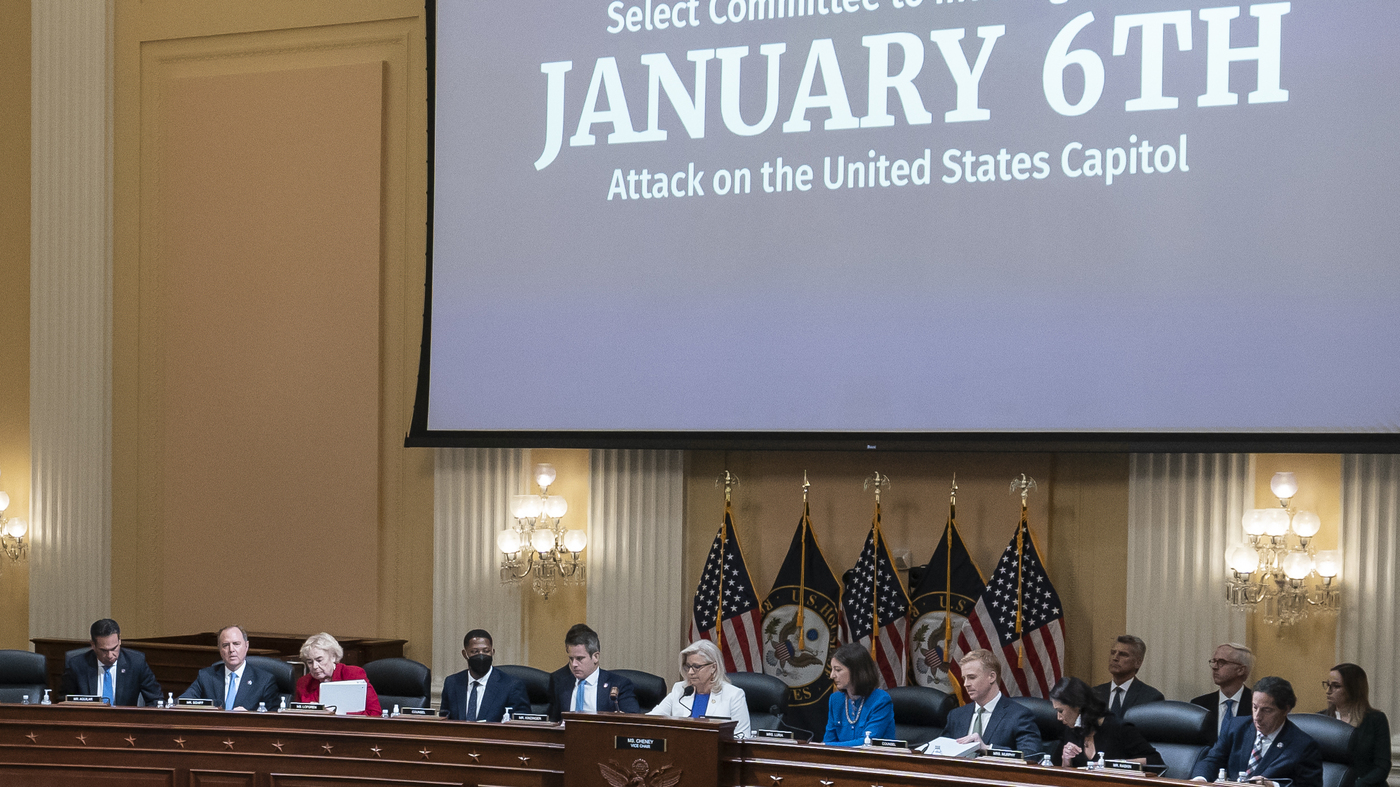 The House Select Committee to Investigate the January 6th Attack on the U.S. Capitol, seen during a public session in July. The panel has scheduled another hearing for next week.

The House Select Committee to Investigate the January 6th Attack on the U.S. Capitol, seen during a public session in July. The panel has scheduled another hearing for next week.

The House select committee leading the probe into the deadly Jan. 6 attack on the Capitol has announced what could be their final investigative hearing this year.

That session is now set for next week on Wednesday, Sept. 28, at 1 p.m. This comes after the panel wrapped up blockbuster hearings earlier this summer focused on former President Donald Trump’s role in the siege.

Committee members have said the hearing will cover new evidence that the panel has not yet shared with the public.

California Democratic Rep. Pete Aguilar, a member of the panel, said it could cover new evidence relating to former Vice President Mike Pence, who faced a pressure campaign from Trump pushing to overturn the 2020 elections.

“There’s new information that we’ve received since our hearings that is helpful to our investigation and we look forward to sharing what’s appropriate,” Aguilar told NPR. “We still feel … it would make the most sense for the former vice president come speak with us and we’re still hopeful that that can happen. But we feel there’s information still worth sharing and we plan to do that next week.”

Politico first reported that Pence could figure largely in next week’s hearing.

The panel had previously been in talks with Pence’s team to appear before the panel, but for months had not secured a deal for his testimony.

Committee Chairman Bennie Thompson earlier on Wednesday told reporters that the hearing will be similar in length to previous hearings.

“It will probably be about two hours like the others and each member will have an appropriate role in the process,” Thompson said.

Thompson has previously predicted the panel will release a final report by year end and is weighing whether to release an interim report in the meantime.

Another committee member, Rep. Jamie Raskin, D-Md., described the member participation for next week’s hearing as “an all hands on deck effort.”

“People can expect to see new findings that we have come into possession of since we suspended over a month ago,” Raskin told reporters on Wednesday.

Raskin added that members of the panel are preparing for the hearing but also focused on the report they will release about their investigation.

“Fundamentally our job is to deliver a report to Congress and to the American people about the nature of this, an attack on our democracy and why it happened and what we need to do to fortify ourselves against [in the] future,” he said.