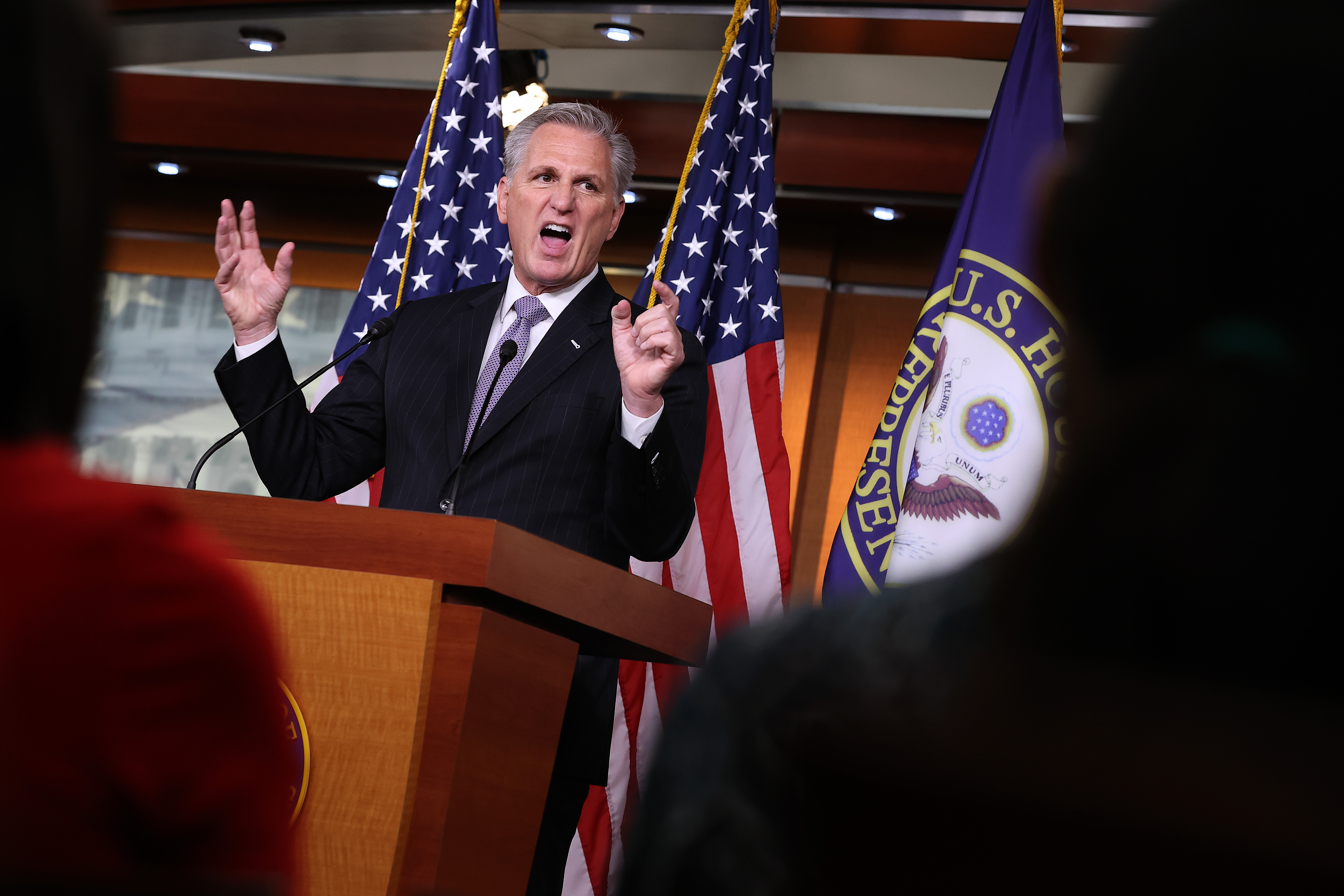 It’s unlikely that many of the GOP’s priorities — which ranged from a parent’s “bill of rights” to hiring 200,000 police officers to overhauling Social Security — could ever become law with President Joe Biden in office for at least two more years. But Republican leaders also stressed a focus that would be firmly within their control in a House majority: investigative powers.

McCarthy, Scalise and Rep. Jim Jordan — who is set to take the gavel of the House Judiciary Committee in a GOP majority — vowed deeper oversight into China’s role in the Covid outbreak, the influx of Southern border crossings and Covid vaccinations. And this time, they’ll have subpoena power.

“We will give Secretary [Alejandro] Mayorkas a reserved parking spot, he will be testifying so much about this,” Scalise said to loud cheers from the roughly 150 supporters, referring to the Homeland Security secretary.

GOP leaders intentionally held their event hundreds of miles from D.C. — Rep. Guy Reschenthaler, who represents the district, described it as far away from “Beltway pundits.” And at times, it felt like a campaign rally, complete with a Toby Keith soundtrack as local GOP voters swarmed McCarthy, as well as firebrand Rep. Marjorie Taylor Greene (R-Ga.), for selfies and hugs. One woman even wore a full-length red, white and blue maxi dress.

And while they vow to turn their blueprint into House-passed bills next year, not just fodder for the final pre-midterms sprint, many of Republicans’ top issues — from supply chains in China to police hiring to transgender student athletes — were battle-tested to serve as a unifying national message.

In GOP leaders’ briefing to members a day earlier, for instance, they highlighted that crime was a “top issue” for Latino men, and stressed they want to “reduce reliance” on foreign countries’ oil “scores well across the board.” On the issue of China, Republican leaders highlighted polling that showed 23 percent of independents called it their “top issue.”

For the most part, the GOP’s blueprint does not say precisely which bills they plan to use to advance their goals or what level of priority each would receive. But Republicans contend it offers critical direction as they plot the path back to the majority, both on the campaign trail and in developing detailed policy to roll out come January.

McCarthy said the first bill to reach the House floor will “repeal 87,000 IRS agents” — a nod to Democrats’ sweeping tax-climate-health bill that bolstered funding for tax enforcement of the wealthy.

Along with their glossy bullet-pointed pamphlets, McCarthy and his leadership team also have a disciplined messaging schedule, where lawmakers are urged to hammer a single message from their plan each week, culminating in Election Day on Nov. 8.

Even Senate Minority Leader Mitch McConnell — who made his disagreement known after his own campaign arm chief released a GOP agenda — praised McCarthy in a tweet, highlighting what he saw as the key tenets of the plan: “Less inflation. More law and order. Parents’ rights. Border security. American energy.”

In addition to their Thursday debrief, Republicans received a lengthy pre-election pep talk from former speaker Newt Gingrich, whose “Contract for America” inspired the conference’s plan. Gingrich himself called the GOP’s plan “more sophisticated” than his own 1994 blueprint, which helped propel that fall’s so-called “Republican revolution” which ended 40 years of Democratic dominance in the lower chamber.

“Keep focused on the commitment. Talk about it over and over and over again,” Gingrich later told reporters, describing his message to GOP lawmakers Thursday morning. “The theory is, you talk about it until you can’t stand it and about that point, the voters are starting to know what’s going on.”

Lawmakers also heard from Kellyanne Conway, former adviser to Donald Trump, who stressed the importance of staying focused on the economy rather than diverting attention to Democratic attack points such as the Capitol attack, abortion and climate. Conway said Democrats running on those issues might enjoy some slight bumps, citing recent polling. But if Republicans run on the economy, she stressed they win by “double digits,” according to people in the room.

The two guests served as a reminder that the House GOP could straddle both old-school conservative ideas — like preaching overhauls to Medicare and Social Security — as well as Trump’s major influences, particularly on subjects like immigration. The plan gave Republicans a chance to declare what they do stand for after two years of opposing the Biden administration at almost every turn.

Democrats — who have been trolling Republicans’ 1994 throwback with references like JNCO jeans and the artist TLC — also see plenty of fuel for their own campaign attacks. They’re most focused on the GOP’s vow to “protect the lives of unborn children,” though the House GOP avoided specific references to legislation, including at the Friday event where leaders didn’t detail plans for abortion policy. (That’s a key difference from the Senate, where a proposed 15-week nationwide abortion ban led to intraparty fractiousness.)

Democrats have also seized on the GOP’s efforts to overhaul Medicare and Social Security, though details on those plans remain scarce. While Republicans say their goal is to prevent the programs from reaching bankruptcy, Democrats insist that it will require program cuts.

“I don’t think they have much of [an] agenda,” said House Majority Leader Steny Hoyer (D-Md.), who held his own event in nearby Pittsburgh where he offered a counter-message to McCarthy. “They have a lot of criticism, but not much solution.”

But Rep. Tom Emmer of Minnesota, the House GOP campaign chief, dismissed the Democratic attacks, particularly on abortion: “This election is about kitchen table issues … Those are the issues we need to address and we need to stay focused on.”

With fewer than 50 days until the election, many Republicans have been eager for something to present their voters beyond sharp criticism of Biden.

“That’s why we waited until now — now, people are focused on the election. Now, people are going to listen. I think it’s a good thing,” said Rep. Richard Hudson (R-N.C.), who serves as GOP conference secretary. “We’re all on the same songbook.”