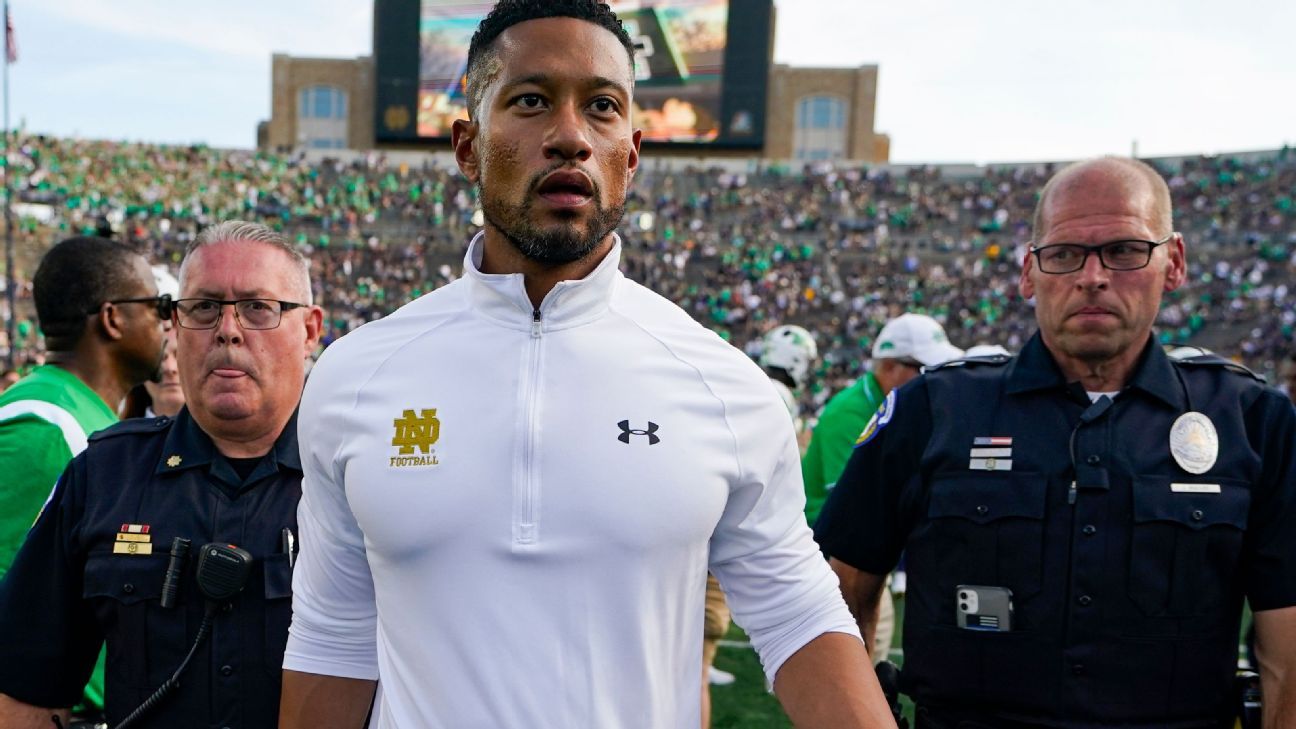 Gilmore, the brother of Stephon Gilmore of the Indianapolis Colts, picked off a pass by Tyler Buchner with 4:35 left, raced to the end zone and then jumped into the stands where Marshall fans were already celebrating the victory.

Marshall (2-0), the first Sun Belt Conference team to play at Notre Dame Stadium, beat a team ranked in the top 10 for just the second time in school history. The Thundering Herd beat No. 6 Kansas State 27-20 in 2003.

“I’m really proud of the way our players competed,” Marshall coach Charles Huff said in his postgame, on-field interview. “Notre Dame is a hell of a football team. Hats off to them, but our guys all week just said ‘control what we can control.’ I couldn’t be more proud.”

Freeman, the 36-year-old first-time head coach who was promoted after Brian Kelly left for LSU, had lost a bowl game to Oklahoma State and at Ohio State last week.

This one will go down much differently to hopeful Notre Dame fans, many of whom packed the stadium. In all three of the losses, Notre Dame led in the second half.

Earlier in the day Saturday, after the pregame walk across campus, Freeman told the crowd, “There’s no better place in this country to get our first win of this new era than here in Notre Dame Stadium.”

The Irish had a streak of 42 straight wins against unranked opponents snapped.

The Herd took a 19-15 lead with 5:16 remaining when Henry Colombi, a transfer from Texas Tech, completed a 3-yard touchdown pass to Devin Miller. The score was set up by a 42-yard run by Laborn, who broke a tackle at the line of scrimmage and juked Irish safety Brandon Joseph before breaking free.

“With the history and tradition of Marshall, we show up and we play hard,” Huff said. “These games aren’t as big to us as to other people because our kids stay locked into the process.”

Any hope for a comeback by the Irish (0-2) ended when Owen Porter intercepted a pass by backup Irish quarterback Drew Pyne with three minutes remaining. Pyne threw a TD pass with 14 second left to cut the lead to five points.

“It’s never easy to come in here after a loss, no matter who it’s to,” Freeman said in his postgame news conference. “It’s disappointing. We didn’t execute, and it comes down to execution.”

The Irish, who struggled offensively a week earlier in a 21-10 loss to Ohio State with a play-it-safe, ball-control game plan, opened the playbook against the Herd but still struggled to get much going.

Buchner was 18-of-32 passing for 201 yards with two interceptions. He also led the Irish in rushing with 44 yards on 13 carries, while Michael Mayer had eight catches for 103 yards.

The Irish grabbed a 15-12 lead early in the fourth quarter on a 1-yard run up by Buchner. He then kept it and ran wide right for the 2-point conversion. But the Irish couldn’t mount much of an offense after that.

Two plays with a little over eight minutes left in the third quarter epitomized Notre Dame’s struggles. On third-and-2 from the Notre Dame 47, the Irish couldn’t get the first down on two carries by Audric Estime, coming up 6 inches short as the line couldn’t get much push.

That led to a drive by the Thundering Herd, highlighted by a backward pass by Colombi to Talik Keaton along the left sideline for a 30-yard gain but the drive stalled after Cam Fancher took over at quarterback for Colombi. Marshall drove to the 4-yard line before settling for a 20-yard field goal to go ahead 12-7.