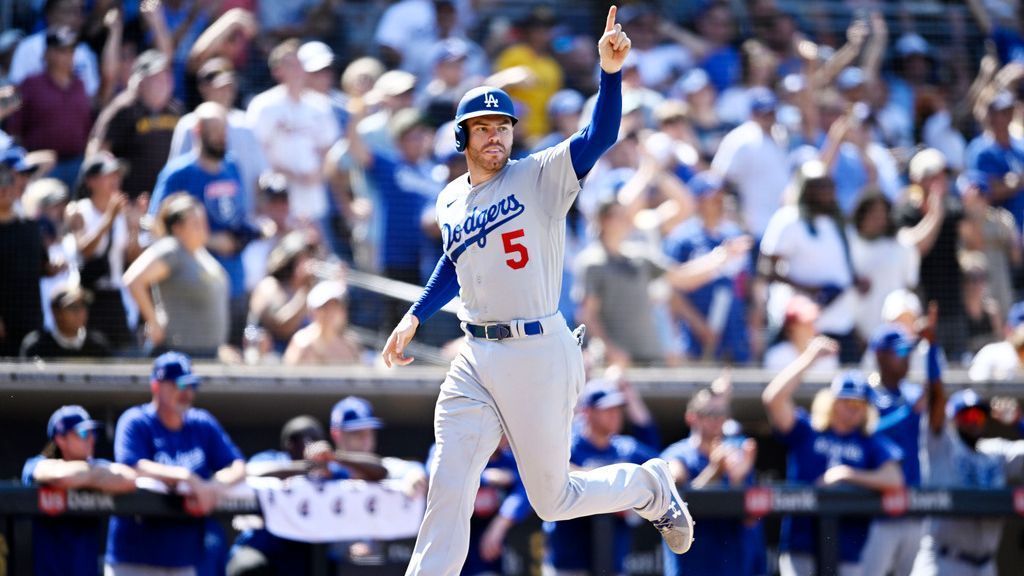 SAN DIEGO — Reaching the playoffs is becoming routine yet still special for Justin Turner and the the Los Angeles Dodgers.

After emphatically becoming the first team to clinch a postseason spot this year with an 11-2 victory Sunday over the San Diego Padres, the Dodgers didn’t celebrate on the field beyond their usual post-victory handshake line.

Afterward in the clubhouse, manager Dave Roberts led a toast with sparkling wine and the players and staff were given caps with the postseason logo.

The message was simple — there’s a lot more to come for the Dodgers, who sealed a playoff berth for the 10th straight season. They have the best record in the majors at 96-43.

“I don’t think it’s anything you can take for granted,” said Turner, who hit a grand slam and a solo homer and will be in the postseason for the ninth straight year. “I’ve been on some teams early in my career that didn’t have this opportunity, so I definitely feel fortunate to be a part of an organization that cares about winning and puts winning first.”

With thousands of their blue-clad fans cheering them on at Petco Park, the Dodgers reduced to two their magic number for winning the NL West for the ninth time in 10 seasons.

“It’s a big accomplishment,” Roberts said. “For me it’s just making sure guys appreciate that it’s not a rite of passage to get into the postseason every year and there’s still a lot of work to be done. I feel our best baseball is yet to be played and just continue to stay focused.”

Max Muncy hit a go-ahead, two-run, bases-loaded single in the sixth inning and Chris Taylor and Trea Turner also homered for the Dodgers, who won their eighth straight series against the Padres dating to June 2021. The Dodgers have beaten the Padres 12 times in 15 games this year and for the 21st time in their last 25 games.

Roberts, who led the Dodgers to the World Series title after the pandemic-shortened 2020 season, said the Dodgers are conditioned to stay focused.

“It’s kind of who we are. It’s a very smart group, it’s a very focused group,” said Roberts, in his seventh season as manager. “We have a long way to go to accomplish our goal. We kind of understand that if you look at yourself as a ballclub and set a certain standard of play, then it allows you to kind of reach that and realize those goals. It’s pretty easy for us and we don’t care about the standings. We just want to play good baseball.”

Freddie Freeman helped the Atlanta Braves win the 2021 World Series before signing with the Dodgers as a free agent. He said that although the Dodgers are already looking forward to winning the division, “you do have to step back and realize that what we’ve done the last four months has been pretty special.”

“To do it this quick is pretty amazing,” Freeman said. “Just all around, just been playing really good baseball for a long time now as a group and hopefully we can get this division wrapped up here shortly, too.”

It was such a blowout that the Padres had first baseman Wil Myers pitch the ninth, and Turner drove his first pitch into the third balcony of the brick warehouse in the left field corner for his 20th homer. It was Myers’ fourth pitching appearance this season and second against the Dodgers.

The Padres’ lead over Milwaukee for the NL’s third wild-card spot was reduced to two.

Padres All-Star right-hander Joe Musgrove (9-7) had a 2-0 lead after three innings before Justin Turner homered to left with one out in the fifth and Taylor homered to center with two outs.

Musgrove loaded the bases with one out in the sixth before Muncy chased him with a single to right that gave the Dodgers a 4-2 lead.

The Dodgers blew it open with a six-run seventh against the Padres’ bullpen. Trea Turner hit an RBI single off Robert Suarez and Tim Hill walked Muncy with the bases loaded. Craig Stammen came on and Justin Turner drove his first pitch deep into the seats in left for his second career slam.

It was Justin Turner’s 14th career multi-homer game. He has 13 homers this season.

Musgrove, who made his first All-Star team this season, allowed four runs and six hits in 5 1/3 innings, struck out five and walked one. He lost for the seventh time in eight decisions over 14 starts.

Andrew Heaney (3-2) allowed two runs, one earned, and three hits in five innings. He struck out six and walked two.

San Diego’s Jake Cronenworth homered with two outs in the second, his 16th.

The Associated Press contributed to this story.