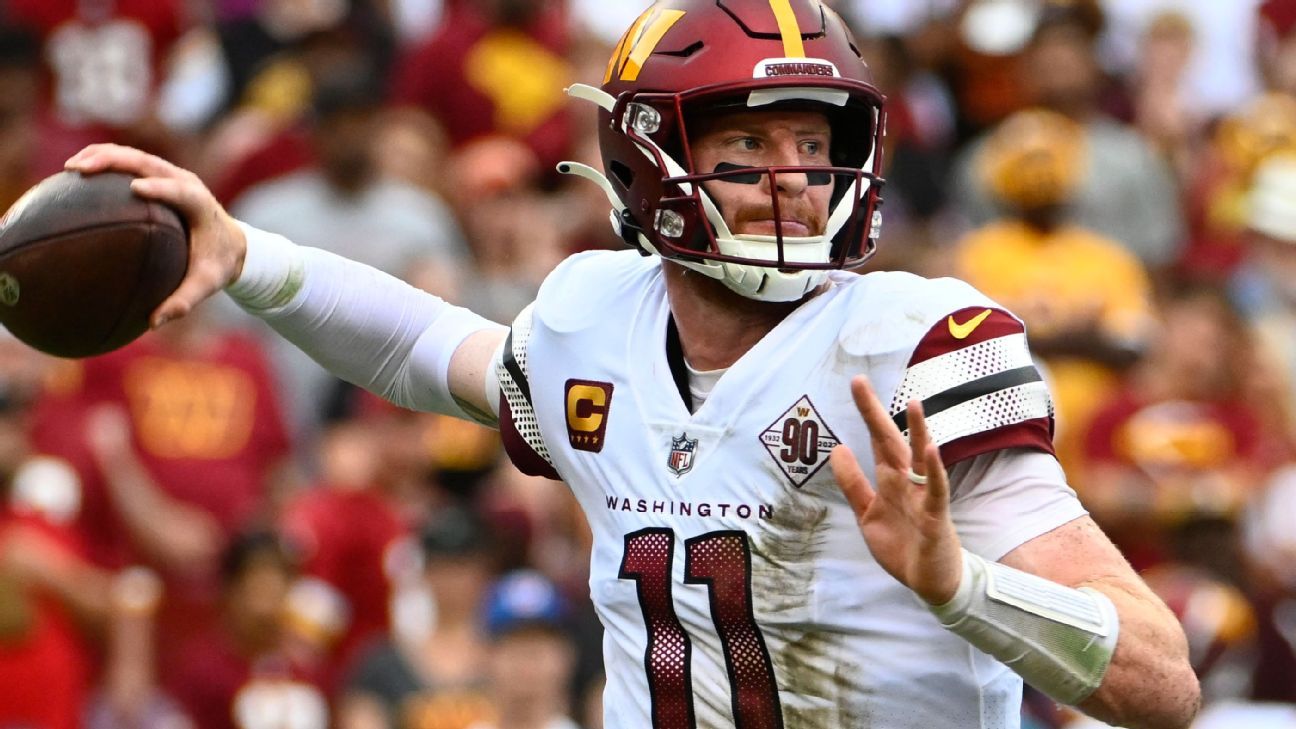 LANDOVER, Md. — Washington Commanders quarterback Carson Wentz defeated his former coach, won his first game with his new team and showed his new one what it’s like to have him as a quarterback — all the bad and the good.

In Wentz’s first game with Washington, he threw for 313 yards and four touchdowns, including two in the final quarter, to lead a 28-22 comeback win over the Jacksonville Jaguars. Wentz played five seasons with Jaguars coach Doug Pederson when both were in Philadelphia.

“It felt great,” Wentz said of the win. “To kind of rally together and get it done when it mattered at the end, that was cool. Cool way to start.”

But the reason Wentz had to rally the Commanders was because he threw interceptions on consecutive plays, leading to 10 Jaguars points. Wentz called it an ugly stretch, made possible by being late on one pick and forcing the second.

It was the sort of rollercoaster ride that has come to define Wentz’s career — and it’s OK with his new coach, Ron Rivera, who knows exactly how he’ll deal with it during the season.

“I’ll take antacids,” he said. “We’re going to ride with him, we’ll go with the good, we’ll go with the bad. We did a lot of research on him and we felt comfortable and confident that this is a guy we need around here, a guy that has some courage.”

After the second interception, Wentz pounded the ground on the sidelines and then looked at Rivera, who told him he’d now have to go win the game. Wentz replied, “I will,” and then calmly walked away — and won the game.

“That’s just the reality,” Wentz said. “You make a couple bad plays, it’s time to go fix it. But at the same time not try to fix it all at once. Just go do the next right thing, go make the next play.”

And then he did. After Jacksonville took a 22-14 lead with 11 minutes, 52 seconds remaining, Wentz showed the big-play ability that led Washington to trade for him in March, hoping he solves their decades-long quest for quarterback stability. Wentz was the 33rd quarterback to start for Washington since it last won the Super Bowl after the 1991 season.

Wentz showed why they hope there’s better days ahead when he capped a four-play drive with a 49-yard pass to receiver Terry McLaurin, hitting him in stride.

Wentz then led a 13-play drive for the go-ahead points. He completed five-of-eight passes for 59 yards and connected with rookie receiver Jahan Dotson for a 24-yard touchdown pass with 1:52 remaining.

“I’ve played a lot of football, I’ve seen the ups and the downs,” said Wentz, who threw two first-half touchdown passes, “and just knowing from the past trying to do too much in those situations can come back to haunt you. I believed in them and guys made plays when it mattered.”

Wentz’s season last year ended with a 15-point loss to Jacksonville, costing the Indianapolis Colts a playoff berth and all but sealing his fate after one year. The Colts agreed to a trade less than two months later — and only a year after acquiring him from Philadelphia.

But this is a different Jaguars team, one now coached by Pederson. Wentz caught up with him before the game.

“Two years ago, we were here in Week 1 together (with Philadelphia),” Wentz said. “You realize how crazy things change, but he’s a guy I have nothing but respect for and wish him the best. It was fun to see him, catch up again and compete against him.”

After the game, Wentz spoke to his new teammates, hammering home the resiliency of the Commanders and telling them how he has to play better.

“But the key point,” McLaurin said, “was how he responded and stayed poised under pressure.

“He doesn’t get too high, he doesn’t get too low. To come back after the tough turnovers and respond the way he did, that’s a true test of his character. We’ll have a lot of opportunities to win some games.”