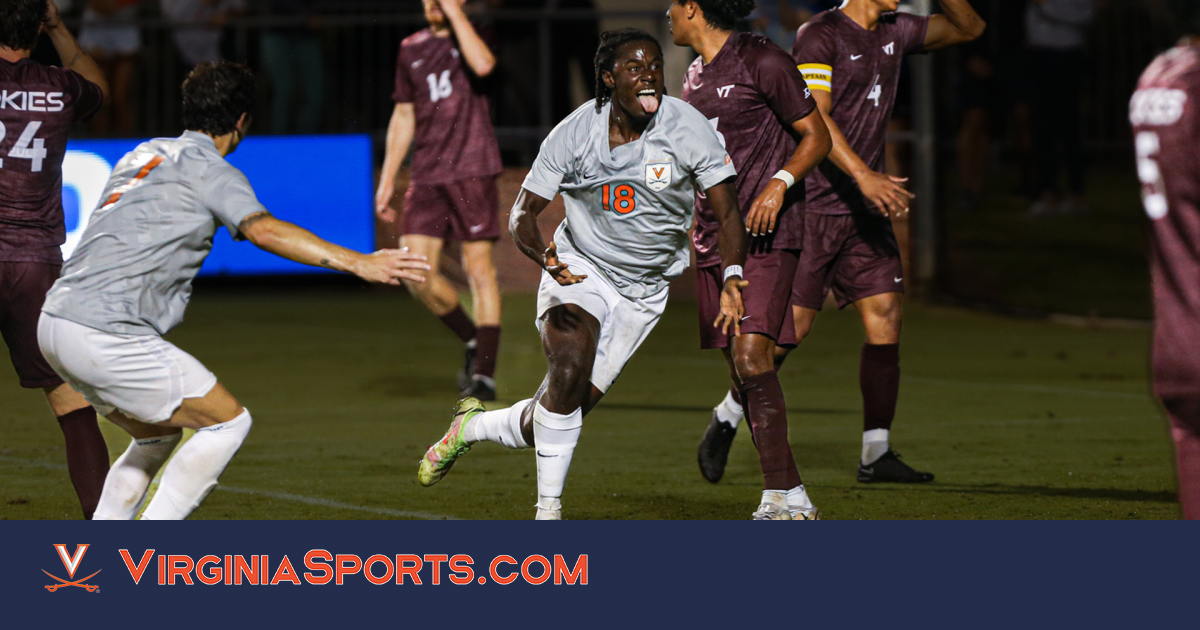 CHARLOTTESVILLE, Va. – Thanks to a gritty team performance, the Virginia men’s soccer team (3-2) scored four goals in the final 20 minutes of action to rally from a one-goal deficit and capture a 4-2 victory over Virginia Tech (0-4-1) on Friday night (Sept. 9) at Klöckner Stadium.

Virginia jumped out to a hot start straight from the kickoff as the Cavaliers recorded a pair of shots in the opening minutes. Virginia kept possession of the ball applying pressure throughout the first quarter of an hour.

The opening goal was scored by the Hokies in the 21st minute against the run of play. After winning a free kick ten yards outside the Virginia penalty area, Virginia Tech’s Misei Yoshizawa whipped a ball into Conor Pugh who headed the ball into the net giving his team a 1-0 lead they would take to halftime.

The second half saw more of the same from both teams as Virginia held almost all of the ball but struggled to find a way through.

Ten minutes past the hour mark, Leo Afonso dashed down the right sideline and whipped the ball into the penalty area where his fellow captain Andreas Ueland smashed it into the back of the net to level the score.

The Cavaliers poured on the pressure following the goal. Just five minutes after the team equalized, Asparuh Slavov was played into the Hokie penalty area by Triton Beauvois. The sophomore fired in a low cross in front of goal that was met by a diving Kome Ubogo who headed the ball home and put the Cavaliers on top with just 15 minutes remaining in the match.

The floodgates broke open in the 82nd when Phil Horton was brought down inside the penalty area. After Virginia Tech’s Jack Dearie was sent off with a red card, Horton calmly slotted home the penalty kick. Leo Afonso would score again in the 84th to put the finishing touch on the Cavalier victory.

“We wanted a response after the game against Maryland. We found ourselves in a similar situation at halftime, and having gone through what we have gone through, I think we were better prepared for it. We just felt like all we needed was a goal and if we scored a goal, we were going to win this game.”

The Cavaliers will return to Klöckner Stadium on Tuesday (Sept. 13) where they will take on La Salle. Kickoff is set for 7 p.m.