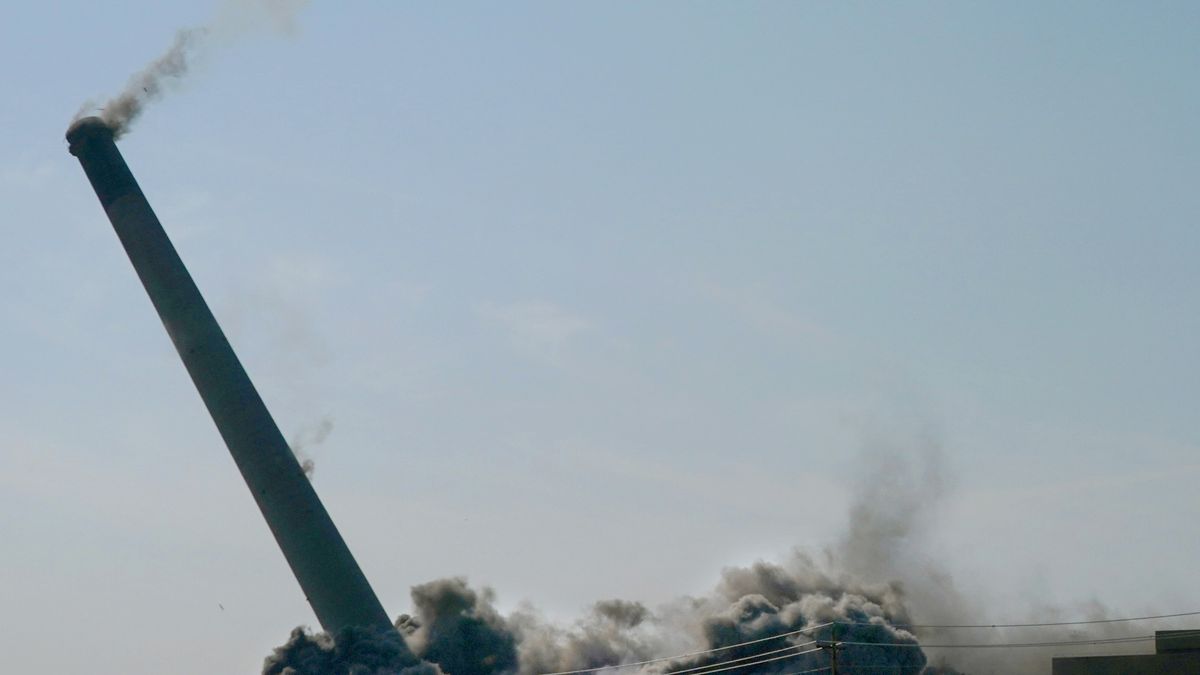 The towering smokestack at Portland General Electric’s shuttered coal-fired power plant near Boardman has fallen, heralding the end of the era of coal-fired power generation in Oregon. Imported electricity generated from coal still flows through transmission wires across the Pacific Northwest, but that looks to be winding down soon, too.

Watch a video of the demolition:

The Boardman coal plant operated from 1980 until its early retirement in 2020. It is located in Morrow County, about 11 miles southwest of Boardman — where the closest residences are — and about an hour’s drive upriver of the east end of the Columbia River Gorge. The plant’s 585-megawatt generating capacity was also the state’s single largest source of climate-warming pollution.

PGE executives decided more than a decade ago to shut the Boardman plant down by 2020. The announcement helped settle a Clean Air Act lawsuit brought by green groups, plus PGE avoided having to make costly emissions control upgrades down the road. The closure eliminated about 2 million tons of greenhouse gas emissions that were coming from the plant every year. The closure also ended mercury and sulfur dioxide emissions that were blamed for haze and air pollution in the surrounding area and the Gorge scenic area.

Explosive charges were set around the plant’s 656-foot-tall stack and adjacent boiler ahead of Thursday’s morning demolition.

In the short term, PGE replaced the electricity from coal with a wide mix of other resources, mainly purchased on contract from other generators. Separately in 2016, PGE opened a large natural gas-fired power plant at Boardman, the Carty Generating Station, across the street from the former coal yard.

The closure of the Boardman coal plant leaves one coal-fired power plant operating in the Northwest, the TransAlta coal plant in Centralia, Washington. But its days are numbered too, for the same reasons the Boardman plant shut down. Under pressure to cut emissions, TransAlta struck a deal with Washington’s governor and the state legislature to retire one of the plant’s two units in 2020 and fully stop burning coal by the end of 2025.

Even with the Boardman coal plant gone and TransAlta on the way out, there is a notable amount of electricity generated from coal still coursing across transmission wires into Northwest homes and businesses. The most recent figures for the statewide power generation resource mix posted by the Oregon Department of Energy showed coal accounted for 26% of the electricity on the state grid in 2020, behind hydro at 40% and ahead of natural gas (21.5%) and wind (7%).

Between 2016 and 2021, the Oregon Legislature passed some of the most aggressive clean energy laws in the nation. Lawmakers first set a deadline of 2035 to kick coal-powered electricity off the grid completely in the state. A follow up measure last year requires the state’s biggest utilities, notably PGE and Pacific Power, to reach zero emissions for all electricity generation by 2040.

Some environmental campaigners, including the Sierra Club’s Beyond Coal campaign, are pressuring Northwest utilities and state regulators to accelerate the phase-out of coal in order to reach self-imposed climate goals and protect public health.

Watch the crowd react to the demolition of the smokestack.