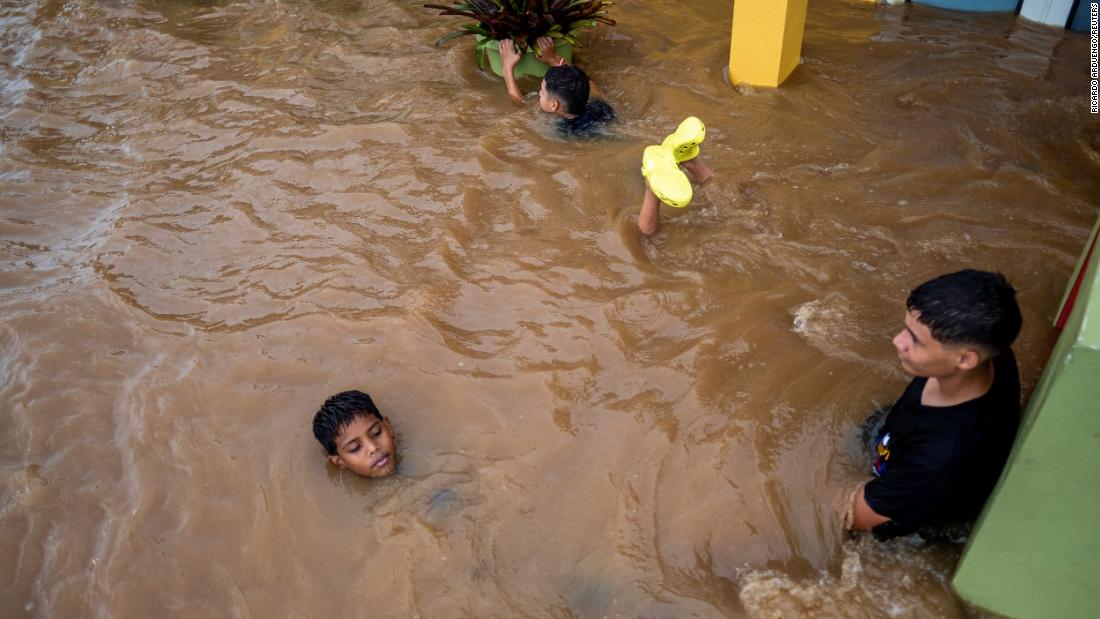 The Biden White House is mobilizing a surge of assistance after Hurricane Fiona triggered lashing rains, severe floods, mudslides and blackouts. The echoes of 2017, when Maria caused more than a couple thousand deaths and left tens of billions of dollars in damage, are haunting local residents who are still trying to rebuild. Some whose homes were flooded out may face the prospect of starting again.

“It has been catastrophic rain that just won’t stop,” Robert Little, the Federal Emergency Management Agency coordinating officer on the island, told CNN’s Erin Burnett, as the government’s relief effort began to accelerate. “The FEMA team has been leaning forward ever since we got the call to get down here.”

The effort is building on an improved federal presence on the island since Maria, when the Trump administration was heavily criticized for a haphazard response and cheerleading for itself despite a tragedy that unfolded for months afterward as technicians struggled to restore the electrical grid. Although they often seem ignored in Washington, Puerto Ricans are US citizens living on a US island territory and are entitled to the federal government’s assistance.

Detailed damage assessments from this storm were still being compiled early Tuesday, but some residents said terrible flooding and mudslides were reminiscent of the devastation wrought by Maria.

The latest hurricane’s arrival was especially cruel since many Puerto Ricans have had a rough time since 2017, struggling through grim chapters of storms, earthquakes, the pandemic and political turmoil.

“This is devastation over devastation,” Carmen Yulín Cruz, the former mayor of San Juan, told CNN’s Wolf Blitzer on “The Situation Room.”

Puerto Rico’s Gov. Pedro Pierluisi told CNN’s Anderson Cooper on Monday night that while most of the damage five years ago was caused by raging winds, the problem this time is the volume of rainfall. But while the power grid was repaired after Maria, it hasn’t actually been improved, he said.

Still Pierluisi added: “We are much better prepared now than Puerto Rico was five years ago when we got hit by the Hurricane Maria. Just to give you an example, FEMA now has four warehouses located throughout Puerto Rico as opposed to one.”

‘We are just halfway back’

Millions of residents lost power as Fiona swept in. And after crossing the Dominican Republic, where it left a million customers without running water, it is now a Category Two hurricane expected to pass near Turks and Caicos Tuesday.

At least two people in Puerto Rico died as a result of Fiona, a spokesman for Pierluisi told CNN. One was a 58-year-old man who was swept away by a river. Another man died when his generator caught fire as he tried to fill it with gasoline.

Conditions are challenging because many medical centers were running on emergency power. Downed trees and power lines made it tough for patients to reach hospitals. The National Guard and emergency responders rescued about 1,000 people overnight into Monday as rain pelted the island.

As President Joe Biden flew back from London and the funeral of Queen Elizabeth II, he called Pierluisi from Air Force One to vow strong support. He said 300 federal employees were already at work and that the number of support personnel would increase substantially as damage assessments were completed.

The President promised that the federal team would stay as long as it took “on the job to get it done,” especially since many families were still rebuilding after the nightmare following Maria, a deadly Category Five storm that left many residents without power for months.

One man, Juan Miguel Gonzalez, bemoaned the impact of a storm that mercilessly undermined the rebuilding work of many Puerto Ricans.

“We are not all the way back; we are just halfway back. A lot of people, more than Maria, have lost their houses … now because of the flooding,” Gonzalez told CNN’s Leyla Santiago.

The primary impulse from the White House and government emergency management agencies is always to alleviate casualties and loss of life from a storm. Then the clear-up and the rebuilding begins.

Every hurricane brings potential political pitfalls for presidential administrations. A delayed response or signs of indifference or misdirected aid can cause days of unflattering news coverage with the potential to stall political momentum, like that currently being enjoyed by Biden.

Ever since Hurricane Katrina slammed into the Gulf Coast in 2005, and exposed a disastrous disconnect between the George W. Bush administration and local authorities, White House teams have been alert to the potential of a political backlash from poor handling of natural disasters. And they go out of their way to stress cooperation with local authorities. Or at least most of them do.

Another hurricane hitting Puerto Rico has revived memories of ex-President Donald Trump’s response to Maria, when a video of him tossing paper towels at an aid distribution center came to epitomize an often indifferent relief effort. The former President, however, awarded himself an A-plus for his response, despite the fact that more than 2,900 people, according to the Puerto Rican government, were later revealed to have died from the impact of the storm. Trump also reacted to criticism by lashing out at the media and local officials — in a preview of how he would prioritize his political aspirations over sound disaster management during the coronavirus pandemic.

Yulín Cruz, who frequently clashed heatedly with Trump in the aftermath of Hurricane Maria, said that the people of Puerto Rico were collectively suffering post-traumatic stress disorder after successive disasters but that a strong federal government response could help alleviate their trauma.

“The federal government has a great opportunity here, (and) President Biden to show the world how things are done when they are done right,” she said.

After the immediate relief effort, Washington is likely to be called upon to offer more long-term aid to Puerto Rico residents for yet another rebuilding effort. But former FEMA Administrator Craig Fugate said that the lesson of previous natural disasters was that returning things to how they were would not work.

“The insanity of going back and putting it back the way it was isn’t working,” Fugate told CNN on Monday.

Although 2022 has been a relatively benign hurricane season so far, such storms feed on warm ocean water and moist air, and scientists say that the climate crisis is making them more powerful.

The proportion of high-intensity hurricanes has increased due to warmer global temperatures, according to a UN climate report released last month. Scientists have also found that the storms are more likely to stall and lead to devastating rainfall and they last longer after making landfall.