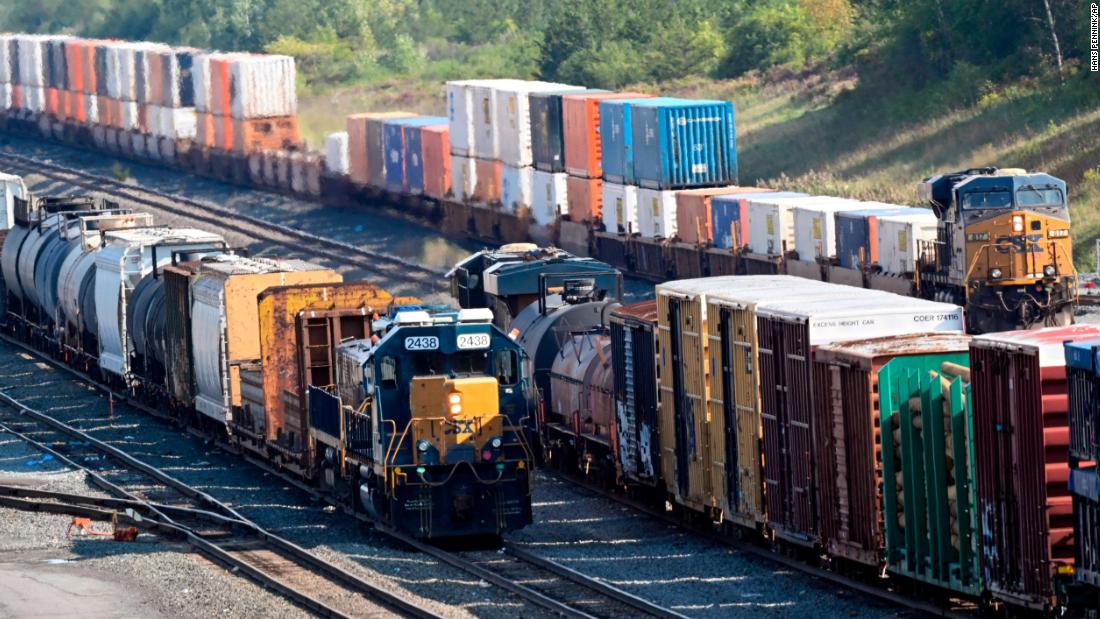 Trumpeting a “win for tens of thousands of rail workers who worked tirelessly through the pandemic,” President Joe Biden announced the agreement early Thursday morning after an all-night bargaining session hosted by Labor Secretary Marty Walsh between the unions’ leadership and the railroads’ labor negotiators.

The threat of a strike has not gone away entirely — the deal needs to be ratified by union members — but the tentative agreement provides immense political relief during the midterm election season. An extended halt of the vast freight trains that snake across the prairies and north to Canada and south to Mexico would have caused a full-blown economic, social and political crisis at a time when the nation is still clawing its way back from a fragile and redefined sense of normality after the Covid-19 pandemic and facing the worst spikes in food prices since 1979.

A quarter of the way into the 21st century, it’s a little shocking that a rail network that most Americans probably don’t spare a thought for still forms an economic backbone of the nation. But the latest showdown is far from the only occasion in history when labor disputes in this critical industry have threatened nationwide disruption, and have turned into high-stakes political dramas as a result. Without freight rail, the country can’t properly function.

The dispute may be focused on the railroads, but it is also emblematic of a wider trend in industrial relations in modern America, as workers squeezed in ventures pared back aggressively for maximum profit potential, from retail to health care to transportation, demand livable working conditions and turn to unions for help.

The repercussions of a rail strike would have been dramatic. Roughly 30% of America’s freight moves by rail. If vast trains, some with 240 wagons, don’t move, the country would need to find an impractical 80,000 truck drivers to make up the shortfall. It might seem counterintuitive, but a strike on the railways would send gasoline prices for cars soaring again. That’s because refineries would struggle to get sufficient crude oil from their rail deliveries. Recently harvested crops would be stuck, unable to reach processing plants and could spoil. Farm groups warned of the threat to fertilizer stocks that are transported by rail and needed for the next planting season. There would have been shortages of food and other items in stores — and prices could have risen again, adding to the current plague of inflation. New and used cars would be more expensive, if factories can’t get the parts they need for their assembly lines. And the ports that became clogged during the pandemic could have again filled up, in a huge problem for the US economy that would quickly send shockwaves around the world.

A strike lasting weeks could have underscored, yet again, the tenuousness of the supply chain networks that are the foundation of modern life and how it doesn’t take long to incur serious damage.

These painful consequences, which could touch every American, explain why the talks in Washington brokered by Walsh were so important and urgently pursued.

Negotiations to avert the strike went on for 20 hours, with a deal reached around 5 a.m. ET Thursday, a source familiar with the matter told CNN’s Jeremy Diamond and Phil Mattingly. Biden “made a crucial call” to Walsh and negotiators Wednesday night, the source added, pushing both sides to realize the harm that families, businesses and communities would feel if there was a shutdown of the rail system.

Biden’s team worked to head off a political nightmare

A rail shutdown was not just a threat to the day-to-day lives of millions of Americans. The prospect was a huge problem for Biden and Democrats, first because they know that their brightening chances of staving off a Republican wave in the midterms could be dashed by another devastating shock to the economy that sends prices even higher and shatters the sense of normality that Biden pledged to restore. Another surge in inflation caused by a rail strike could also force the Federal Reserve to prolong its aggressive interest rate strategy, which is expected to go up another notch next week, and so raise the chances of an overcorrection that sends the economy into a recession.

The President, boosted by the passage of key congressional items, has been aggressively selling a story that America is back on the move again and that its economy is ready to roar. A rail strike would quickly tarnish his credibility in selling that narrative.

In a broader sense, the rail dispute pulled Biden between two competing strands of his political identity. He is the most-pro union president in decades. He needs the support of the movement to drive turnout in November and has no desire to be seen pressuring workers to accept a bad deal. On the other hand, the success of his entire presidency rests on getting inflation down and preventing Republicans from amassing Capitol Hill majorities that could make him a domestic lame duck.

Republicans, seeking to wrest the midterm debate back from the controversy over the Supreme Court’s overturning of abortion rights, already spotted an opening in the rail dispute. The GOP tried and failed to pass a bill in the Senate that would enshrine deals most railway unions have made with companies and avert a strike.

“President Biden should have already resolved this himself. Democrats must let this pass,” Senate Minority Leader Mitch McConnell tweeted.

But some Democrats are unwilling to put pressure on unions. The GOP measure was in the end blocked by progressive Sen. Bernie Sanders, who’s twice run for the Democratic presidential nod. The Vermont independent blasted rail companies for making billions in profits and awarding their CEOs millions in compensation while imposing inhumane working conditions.

“The key issue in the current negotiations are not about salaries. They are about the working conditions in the industry which are absolutely unacceptable and almost beyond belief,” Sanders said, criticizing the lack of sick leave offered to some employees and a system that requires many to be on call for dispatch to work on trains 24 hours a day a day and seven days a week.

A crisis long in the making

Arthur Wheaton, director of Labor Studies at the ILR Worker Institute of Cornell University, said that years of cost cutting and consolidation in the rail industry predated the pandemic and have led to the current impasse.

“The railways tried very hard to reduce headcount and actively reduce the number of people that they had working for them as a way to increase their profits or to have a higher return on investment so they could get more investment from Wall Street,” Wheaton said. But that paring down of manpower had caused a deterioration in the conditions for workers, who already faced long hours, and could raise safety concerns given the hazardous cargos some trains carry. The “on call” system mentioned by Sanders is at the center of the current dispute.

“That’s not sustainable for a family or sustainable for your health long term. You’d like to be able to go to bed knowing you don’t have to work for the next 12 hours, instead of saying, ‘Oh, I gotta wait and see if the phone rings,” Wheaton said.

The threatened railroad shutdown would have been the first major strike in the industry since 1992, when Congress moved with unusual speed to end a labor stoppage after only two days amid severe economic consequences — including layoffs at mines that could no longer ship out their coal. The strike had shut down almost all goods and passenger rail in the country and, as with the current drama, threatened to become a political storm in an election year.

One question with this new dispute is whether an ever-more polarized Congress could agree on terms for ending industrial action or whether such an erupting economic crisis would have left rival lawmakers with no choice.

Throughout America’s industrial history in the 20th and 19th centuries, railroad strikes often broke out over poor wages or salary cuts or difficult and dangerous conditions. Often they were crushed by the government or industry barons, sometimes amid scenes of violence. But they are also written in the lore of the labor movement. And they also established leverage that played out in the negotiations between unions and company bosses in Washington.

Then and now, the threat of closing down railroads for a sustained period conjures such dire economic repercussions that the dispute ends up becoming a major political issue that the nation’s leaders are ultimately called on to help solve — for their own good and everyone else’s.