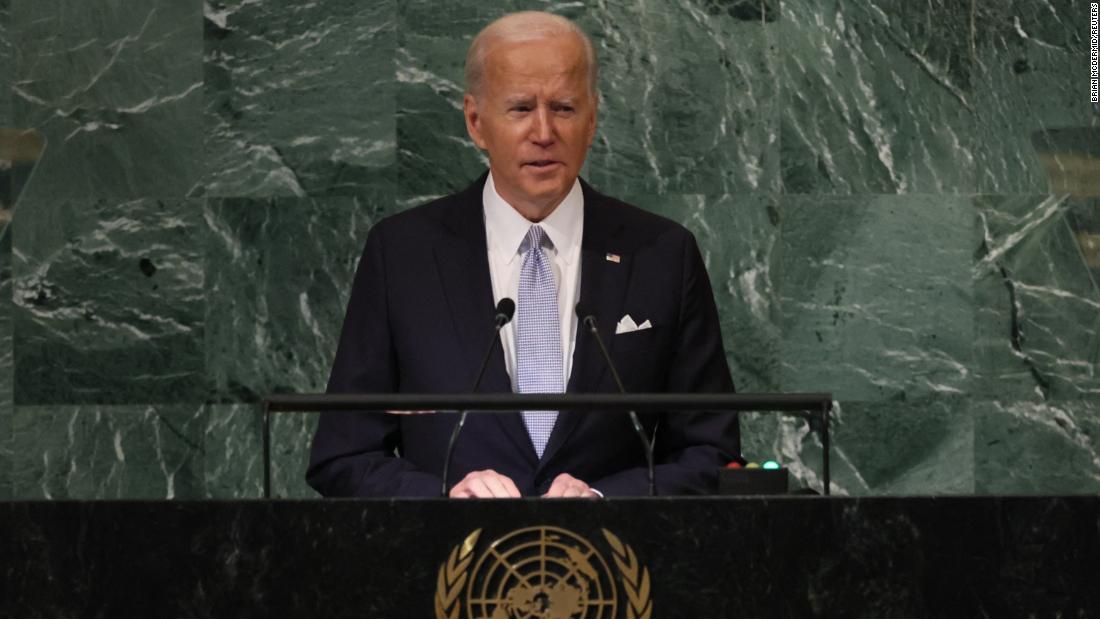 Putin’s implied threat that he could use nuclear weapons, delivered in a speech on Wednesday — and his warning that he was not bluffing — made Biden’s own speech at the UN General Assembly seem all the more grave.

“That should make your blood run cold,” he added.

Putin’s announcement of a partial national mobilization is being seen outside Russia as an admission of failure for his Ukraine operation so far, and of rising domestic political pressure. But forthcoming referenda in captured Ukrainian territory on joining Russia, that are described by the West as a sham, take the war to a tense new stage.

If these areas do join Russia, Ukrainian attacks on them using Western arms could in theory be interpreted as an assault on the Russian motherland itself.

This potentially makes Putin’s threat to use nuclear arms to defend Russian territory a significant escalation.

The Russian leader is clearly seeking to scare Western publics and to make Washington and allied capitals think again about their support for Ukraine, which has helped turn his invasion into such a disaster.

Putin could well be bluffing about the possible use of Russia’s nuclear arsenal. But then again, maybe he’s not.

CNN’s Chief Law Enforcement and Intelligence analyst John Miller said the Central Intelligence Agency and the Defense Intelligence Agency have spent years studying Putin’s psychology, including his obsessions with masculinity and appearing tough and what effect those concerns could have on him if he begins to look weak.

“The use of a nuclear weapon is the most serious kind of strategic decision a world leader can make, but with a leader who is as invested as Putin is with image, there may be an emotional factor in that decision,” Miller said.

“So right now, no one in the US intelligence Community is estimating the likelihood of the use of a tactical nuclear weapon at zero,” Miller said.

Putin certainly has a history of following through on many threats. And Ukrainian generals and foreign military experts have raised fears that, if cornered, the Russian leader might deploy a limited tactical nuclear weapon as a show of force or to take out multiple assets or military units.

Miller said the most urgent question now for the West — and one that should be discussed by leaders at the UN General Assembly — is what to do about the potential use of a tactical nuclear weapon by Russia.

“If such a weapon were deployed against Ukrainians in a limited manner, what would the response be both from NATO, the United States and the world? There are still countries sitting on the fence about condemning Russia’s actions and joining in sanctions. Would the deployment of a tactical nuclear weapon galvanize the world against Putin? If it would, has he figured that out, and does he care?” Miller said.

While tactical nuclear weapons create a lower blast radius and more limited fallout than strategic warheads, launching even the most limited type of such a weapon would be “an enormous game-changer,” Miller added.

“The key question right now is: have NATO and the United States agreed on exactly what they would do in that scenario and has that been transmitted through the right back channels to Russia. We are in a high stakes game of chicken,” he said.

Any use of a tactical nuclear weapon would cross a threshold in the history of warfare and leave the West with a conundrum about how to respond without triggering a full-on nuclear exchange.

And even if the nuclear poker stops now, Putin has already established a sinister new example just with the mention of Russia’s nuclear arsenal as leverage in a limited conflict. Other tyrannical regimes and wannabe nuclear states are picking up tips.

At a time when the idea of nuclear non-proliferation is under extreme strain, Biden had this warning: “A nuclear war cannot be won, and must never be fought.”

Other presidents have often said something similar. But he’s the first US commander-in-chief in 40 years who must wrestle with a full scale nuclear showdown not as a theoretical possibility but as a real, if hopefully still remote, risk.