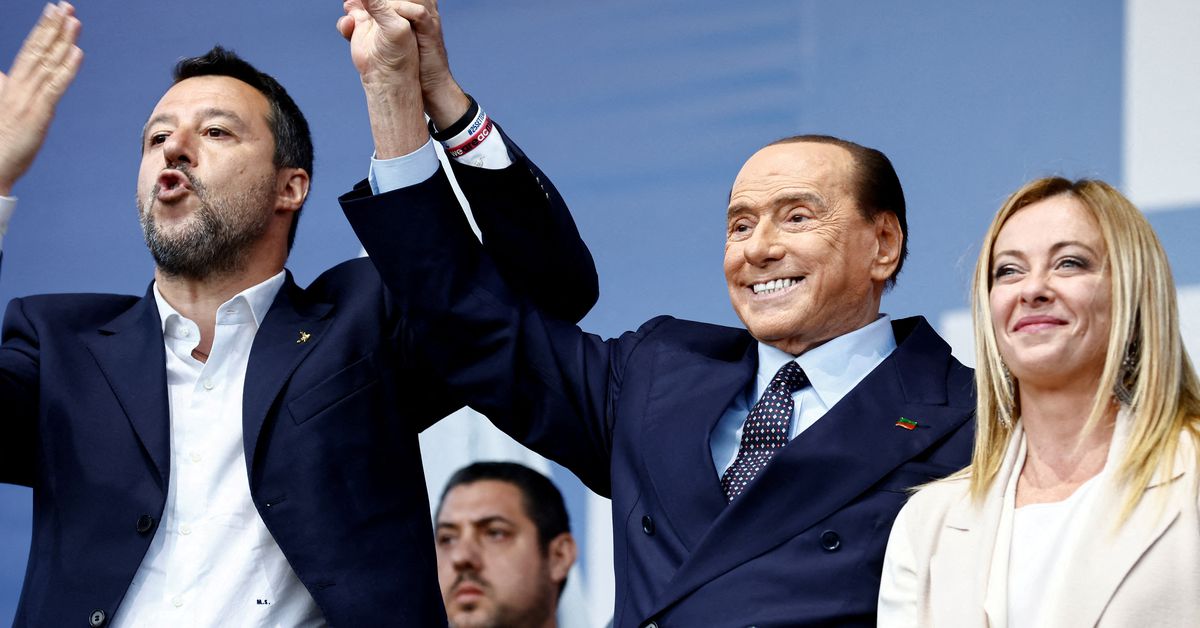 PARIS/BERLIN/BUDAPEST, Sept 23 (Reuters) – The European Union’s powerhouses will have to tread carefully around Giorgia Meloni if the nationalist candidate’s coalition wins Italy’s election on Sunday, or risk pushing Rome towards Hungary and Poland, European officials said.

At play is the balance of power inside the EU as it contends with the fallout from Russia’s war on Europe’s eastern flank and the continent’s worst energy and cost-of-living crises in decades.

If Meloni wins, Sunday’s election will hand Italy its most right-wing government since World War Two. Although she has played down her far-right past, cracks in her coalition over foreign policy have emerged. read more

Underscoring challenges ahead for Meloni and Europe, former Italian Prime Minister Silvio Berlusconi, whose Forza Italia party belongs to Meloni’s coalition, said Russia had been “pushed” into the war on Ukraine. his comments are likely to concern Western allies.

“All eyes are on Rome right now,” one EU official told Reuters.

After a victory for Sweden’s nationalists, there is concern in Brussels, Paris and Berlin of a “populist front” forming that could block EU decision-making as it seeks to stave off recession and shield households from inflation.

Meloni’s intentions are less clear. She presents her Brothers of Italy party as a mainstream conservative force removed from its post-fascism roots, but some Europhiles are skeptical.

“It is worrying that a founding member of the EU is in such a situation. It is a threat to the EU and to Italy,” said Rolf Müntzenich, a lawmaker in German Chancellor Olaf Scholz’s Social Democrats party.

German magazine Stern plastered its front page with a picture of Meloni under the banner: “the most dangerous woman in Europe”.

Macron has privately told EU officials he is concerned about a Meloni victory, according to sources aware of the conversations. When asked in public, Macron expresses optimism about relations with Italy.

Supporters of Hungary’s nationalist Prime Minister Viktor Orban see in Meloni an opportunity for Budapest to gain a new ally in its battle with the EU executive.

“Orban will probably be able to count on the support of Italy in rule-of-law disputes in the EU,” said Zoltan Kiszelly, an analyst at the pro-Hungarian government think tank Szazadveg.

In Warsaw, where the ultra-conservative government often sides with Orban, officials are also sanguine.

“Right-wing parties are gaining more support than ever before,” said Zdzislaw Krasnodebskia, a lawmaker from Poland’s ruling Law and Justice party. “This is a chance to correct European policy.”

rome-born meloni has a history of euroscepticism and shares Orban’s anti-immigration views and the promotion of traditional family values.

However she has pledged prudent fiscal policies and to maintain unity with European Union and NATO partners in supporting Ukraine against Russia.

She has also sought to reassure would-be EU partners about her intentions in a video in French, English and Spanish.

“I have read that a victory for Brothers of Italy in September would be a disaster, would amount to an authoritarian turn, would mean Italy will leave the euro, and other nonsense. None of that is true,” she said.

Meloni is in direct contact with Draghi and the Italian establishment to smooth over the transition of power and ensure Italy does not spiral into crisis at a time of economic volatility, European officials and analysts said.

This was “to make her understand how important some issues are and that she can’t mess up,” said Marc Lazar, an Italy specialist with Paris-based think tank Institut Montaigne.

In Brussels, officials are unsure how Meloni will handle Italy’s part of the European recovery plan, which is meant to unlock 192 billion euros in return for domestic reforms.

There is also concern over Italy’s debt pile, with Italian interest rates rising more rapidly than their euro zone peers.

Macron is expected to hold talks with Scholz on how to deal with Italy in the coming days, a French government source said.

Paris has been warned by Italian officials from the outgoing administration not to seek public confrontation with Meloni to prevent pushing her into a corner where she might sense little choice but to deepen ties with Orban.

“What the Italians I talked to in Rome said to me was: don’t throw her into Hungary’s arms,” a French government source told Reuters.

Macron would refrain from the combative rhetoric he aimed at Matteo Salvini, another hard-right coalition partner of Meloni, during the 2019 European election campaign, which he framed as an existential fight between ‘nationalists’ and ‘progressives’, a second French official said.

In Washington, however, White House officials played down concerns.

“This kind of ‘sky is falling’ narrative out there about the Italian election doesn’t square with our expectations,” one U.S. official said.

Reporting by Michel Rose, Andreas Rinke in Berlin and Krisztine Than in Budapest; additional reporting by Belen Carreno in Madrid, Jan Lopatka in Prague, Heather Timmons in Washington, Crispian Balmer in Rome and Agnieszka Pikulicka-Wilczewska in Warsaw; editing by Richard Lough and Angus MacSwan