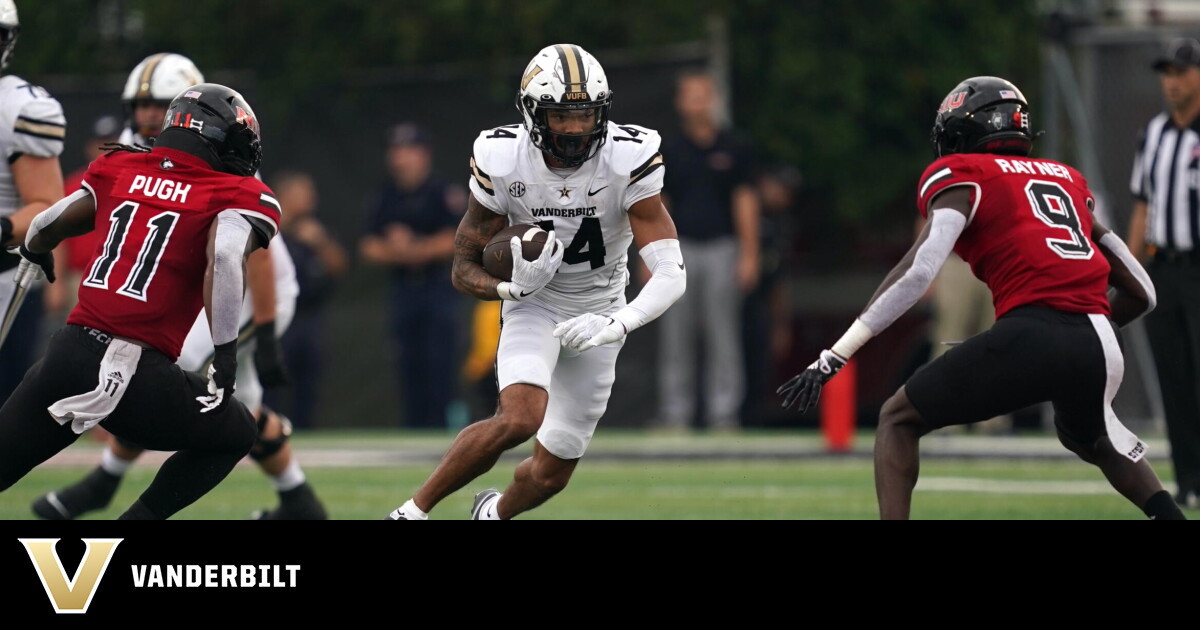 DEKALB, Ill. — Down 14 points in the third quarter Saturday, it looked liked Vanderbilt’s day in DeKalb was about to be awfully dark.

The Commodores, led by freshman quarterback AJ Swann and junior wide receiver Will Sheppard, scored 21 points in this than six minutes of game clock. Vandy’s seemingly porous defense bowed up and pitched a shutout the final 28:37 of the game.

“You saw we were down 14 and, I think, what everybody saw is that we just never give up,” Sheppard said. “Defense went out there and, they gave up that first touchdown in the second half, but after that they shut them down completely and they had a bunch of fourth-down stops, third-down stops and I think we just played Vanderbilt football in that second half.”

After Northern Illinois backup quarterback Ethan Hampton completed a 70-yard touchdown pass to Cole Tucker to put the Huskies up 28-14, the outcome looked as bleak as possible when the Commodores fumbled away their next possession on the Northern Illinois 26. But before the Vandy defense took the field, an on-field huddle during the timeout rallied the troops.

That unit allowed just 68 yards of total offense the rest of the way. It forced three punts. It stopped the Huskies twice on fourth down. And then De’Rickey Wright put an exclamation on the performance with an interception with 4:15 on the clock.

“There’s a moment there where you really feel the momentum of the game shifting and what we’ve talked about all week as a team is we had a chance a week ago against Wake Forest to play to a win, but when bad things happen they snowball. We have to be a team that can step onto the field and shift the energy of the play,” Vanderbilt head coach Clark Lea said. “We were able to do that.

“I’m really proud of the team for that. I think it represents growth. Doing it and doing it consistently are two different things. I thought a big part of that was our defense was stepping in after the turnover and delivering the first stop. Sometimes it’s that simple.”

On the other side of the ball, Swann and Sheppard and their offensive teammates put on a show.

Ray Davis ran for 116 yards on 23 carries. The Vanderbilt offensive line didn’t allow a sack. The Commodores were 2-for-2 on fourth down and 7-for-14 on third down.

“That was a team effort on offense,” Lea said. “Ray Davis continues to be a guy that is a bell cow, runs for hard yards, made plays on the perimeter – he stays in the fight, he stays in the play. Will Sheppard and (Jayden) McGowan both facilitated (Swann’s) performance and that’s what it should look like, right? The quarterback is unlocking performance in the other 10 positions on the field and (Swann) did that. Then those other guys stepped up and did their part, too. It’s what you want to see.”

Swann, a 6-foot-3, 225-pound Georgian, got the Commodores off to a flying start with a 12-play, 80-yard possession that was capped off by a 3-yard lob to tight end Gavin Schoenwald. Davis gave Vandy the lead back at 14-7 with a 3-yard touchdown run at the start of the second quarter.

One of the plays of the day occurred a little less than seven minutes later. On fourth down at the Northern Illinois 21, Swann tried to scramble to his left and went straight into what looked like an apparent sack. But the freshman ducked and escape and floated back to his left where he threw off his back foot down the left sideline.

Davis was sprinting that direction and dove for the reception while getting a toe in the end zone.

“Just kind of improvised. Not every plays work out how you want it to,” Swann said. “Maybe I missed the read? If I did I have to watch the film. But they blitzed up the middle, I tried to get out of the pocket, a D-end came off, he got a hold of me and I just worked my way out of the sack and kept the play alive. Just playing off to the whistle.”

Swann and Sheppard were virtually unstoppable from as the two hooked up on scoring throws of 31 and 13 yards, respectfully. Joseph Bulovas iced the victory with a 35 yard field goal with 12:21 to go.

“I’m still not very satisfied,” Swann said of his first career victory. “I think we still have a lot of work to offensively and as a team. But to get a road win, especially in my first start, felt very good.”

Vanderbilt now turns its attention to the start of Southeastern Conference play and a daunting trip to No. 2 Alabama (3-0) at 6:30 p.m. Saturday. For now, however, the Commodores can soak in a comeback to remember and day in DeKalb they won’t soon forget.