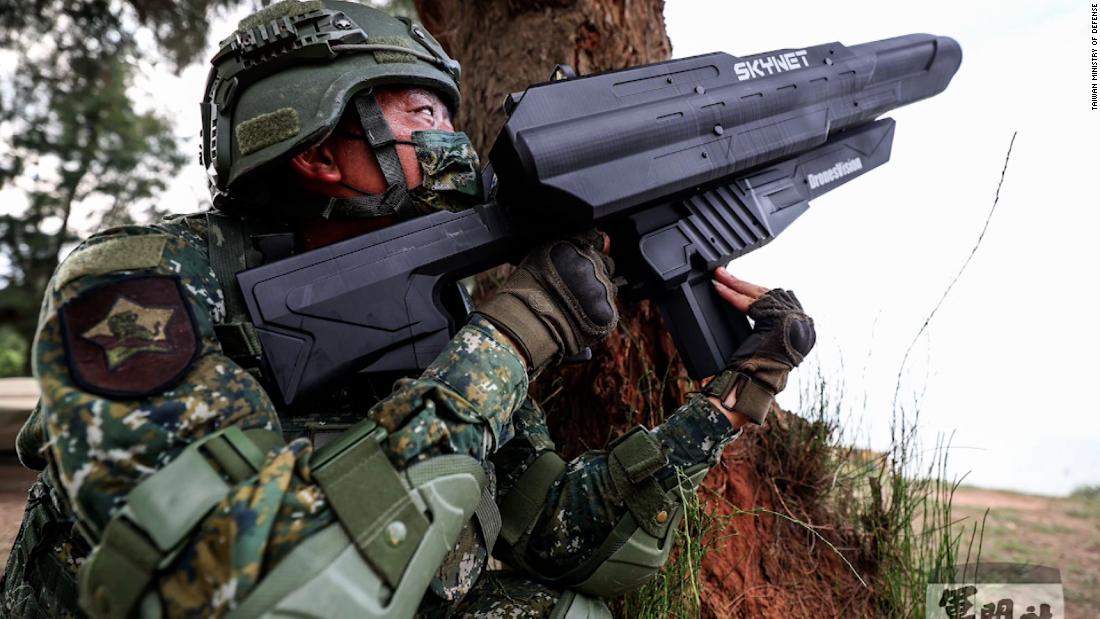 Dressed casually in jeans and T-shirts, shorts and sandals, and chatting jovially in Mandarin as they hunch over a controller and screen, it’s hard to believe they could be up to anything shady — until one of them shouts excitedly, “I got a tank!”

But these men aren’t playing a computer game. They are flying drones over a military site on a nearby Taiwan-controlled island.

The 15-second video clip is among a number of videos that have popped up recently on the Chinese social media site Weibo and show what appear to be civilian-grade drones trolling Taiwan’s military. The island’s military later confirmed these mysterious menaces are indeed civilian drones from mainland China.

One video captures the moment four soldiers from Taiwan realize they are being watched by a drone that’s hovering in the sky above their guard post. Caught off guard, they respond by throwing stones at the intruding drone, which zooms in so close you can make out the faces of individual soldiers.

Video footage of these bizarre encounters has gone viral on Chinese social media and is attracting hundreds of comments mocking Taiwan’s military. The clips seems to expose a stunning vulnerability: the ability of Chinese drones to photograph restricted military sites in Taiwan at any time.

Analysts say the footage being beamed across the internet — showing military sites and personnel in fine detail for all the world to see — is at best embarrassing for Taiwan and at worst, outright dangerous.

The drone incursions come amid increased tensions following a visit by US House Speaker Nancy Pelosi to Taiwan, a self-governing democracy of nearly 24 million people, in August.

That trip angered China’s ruling Communist Party — which views Taiwan as part of its territory, despite never having governed it — and it responded by launching unprecedented military drills around the island, sending warplanes across the Taiwan Strait and firing missiles over the main island.

Taiwan President Tsai Ing-wen has claimed the drone incursions are the latest ratcheting up of this pressure; a new front in China’s “gray-zone” warfare tactics to intimidate the island. On September 1, after warning it would exercise its rights to self-defense, Taiwan shot down a drone for the first time.

But, provocative though the footage is, it is difficult to be sure exactly who is behind the drone incursions.

Beijing has brushed off the drone incursions as “no big deal.” Questioned about civilian-grade drones flying in the Kinmen area, a spokesperson for China’s Ministry of Foreign Affairs recently responded: “Chinese drones flying over China’s territory — what’s there to be surprised at?”

Fueling suspicions, China hasn’t removed the videos from its otherwise highly censored internet or prevented the drones from traveling through its own highly controlled airspace.

Beijing also doesn’t appear to be interested in trying to punish those behind the footage; flying drones over domestic military sites is punishable by prison time.

Isabel Hilton, an international journalist and longtime China watcher, said it was impossible to know who was piloting the drones — and that was exactly what made them so well-suited to “deniable harassment.”

The machines appear to be civilian models, but could “be operated by anybody, including the military,” said Hilton, the founder of China Dialogue, suggesting that “government agencies in the guise of a popular movement” could be behind the controls.

Hilton drew a parallel to events in the South China Sea, where China has been accused of using a maritime militia to enforce its territorial claims by swarming disputed areas with hundreds of what are ostensibly civilian fishing boats.

Western experts say the militia — sometimes dubbed China’s “Little Blue Men” — is funded and controlled by the People’s Liberation Army. China doesn’t acknowledge their existence and when questioned, refers to them as a “so-called maritime militia.”

In both arenas, the ideal result for China is to gain an advantage “without the military appearing to be involved,” Hilton said.

“Whether you’re using fishing boats or civilian drones, it doesn’t look as though this is official policy. It doesn’t look like direct military harassment in the way that the incursion of a warplane does. And so it’s a deniable provocation.”

Hilton said not only did the drones serve reconnaissance purposes — “they’re flying very low over military installations or taking very clear photographs of individually identifiable soldiers” — they could also have a psychological impact on the soldiers, who “find their faces very clearly put up on Chinese social media, where they are liable to be insulted and where people are liable to call for them to be killed.” Taiwan’s media have reported that such exposure could hurt the morale of the island’s soldiers.

“(It’s) designed to remind Taiwan that there’s no escape from Chinese pressure, and that in the end, China will take over. That’s the purpose.”

But not everybody suspects the invisible hand of China’s military.

Paul Huang, a research fellow at the Taiwanese Public Opinion Foundation, a non-profit, non-governmental think tank, thinks that the drones are operated by private civilians who “maybe out of curiosity, maybe out of nationalism” want to provoke Taiwan.

“Flying that close to a Taiwanese military guard post and catching their attention …That’s not really the way any military would deploy or utilize their drones. And frankly I don’t see any good reason that the (People’s Liberation Army) would even attempt something like that,” Huang said.

Still, where he and Hilton agree is that Beijing could stop the drone incursions if it wanted to — but it doesn’t, because it sees an advantage in letting them continue.

“Beijing (sees the incursions) as an attempt by their own population to troll Taiwan, to provoke Taiwan, to make fun of Taiwan’s incompetence. They treat it as a propaganda victory,” Huang said.

“Beijing, as we know, controls its own domestic internet, it controls domestic airspace. If this is happening, it’s because the government wishes it to happen.”

Taiwan has faced the threat of invasion ever since the end of the Chinese Civil War in 1949, when Chiang Kai-shek’s defeated Nationalists fled there to set up a new government, having been chased out of the mainland by Mao Zedong’s Communist Party.

More than 70 years later, the Communist Party continues to view Taiwan as something akin to a breakaway province that must be “reunified” with the mainland at all costs — and it has made clear it is prepared to use force, if necessary, to fulfill that objective.

If China were to invade, the Kinmen islands — most of which have been controlled by Taiwan since the end of the war — would make a tempting first target. Lying just a few miles from the mainland Chinese city of Xiamen — and hundreds of miles from Taiwan’s capital Taipei — they are acutely vulnerable.

It’s for this reason that for the past seven decades beaches in Kinmen have been lined with countless iron spikes designed to make any amphibious assault as costly as possible to an invading force.

For Taiwan, the problem is that the nature of that invading force is changing.

The Kinmen islands’ proximity to the mainland puts them well within the range of commercially available drones, which are cheap and plentiful in China, home to the world’s second largest market for the machines and no shortage of potential operators among its population of 1.4 billion.

And while iron spikes might be useful in a beach invasion, they will not do much against a drone operator trolling Taiwan’s military from the safety of a Xiamen park.

Still, Huang said Beijing may come to regret failing to rein in the trolls, whoever they are.

He said Taiwan could ask DJI, the China-based manufacturer whose logo appeared in a few of the trolling videos, to make the Kinmen islands a restricted area in its database — a move that would prevent operators from being able to fly the drones there.

If DJI refused to comply, Taiwan could exclude it from its market — dealing a further blow to a company that has already been added to a US investment blacklist due to its alleged links to the Chinese state. DJI, the world’s top drone maker, declined to comment to CNN for this article.

And Beijing’s “propaganda victory” may come with other unintended — and unwanted — consequences.

Shortly after the series of drone incursions, Taiwan’s Ministry of National Defense announced that the island would deploy a new anti-drone system at military bases beginning next year. It also announced plans to boost its overall defense budget to a record $19.4 billion, a 13.9% increase over 2022.

“(China) doesn’t really see a problem as of yet, which I think they should, because this could lead to escalation that they didn’t want. If they want to be in control, they better control these civilian drone operators first,” Huang said.

Taiwan, meanwhile, appears to have realized that ignoring the drones and their mystery operators is not an option. Within days of shooting down its first drone, it released a series of pictures to the media showcasing its shiny new anti-drone weapons. It appeared to be sending its own propaganda message: next time the drones come calling, it will be ready.