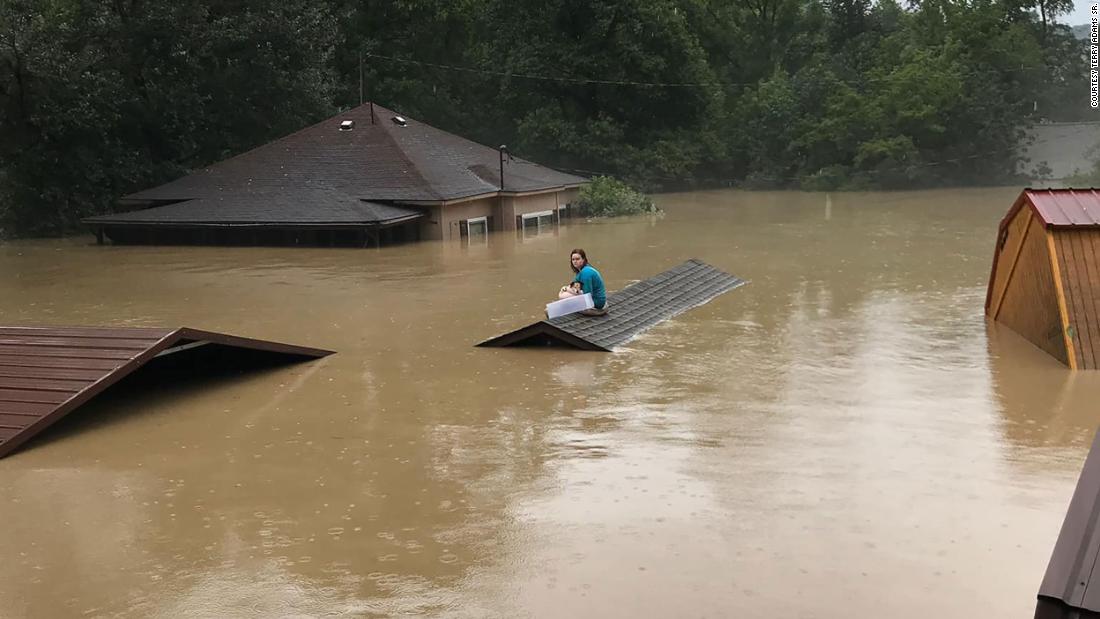 Chloe, who lives with her grandfather in Whitesburg, Kentucky, was alone, with no one but her trusted companion, Sandy, the dog she’s had since she was a toddler.

“There was water as far as I could see,” she told CNN in a message. “I had a full-blown panic attack.”

But she was determined to make it out safely, and take her dog with her.

Chloe’s grandparents were at a home just a few feet away, separated from their granddaughter by the rushing waters. They yelled over to her, urging Chloe to stay inside until help arrived. But with little cell service and a 911 center which, likely overwhelmed, was unresponsive to her calls, Chloe said she realized she needed to get out to survive.

“My next thought was that we needed to swim out to my uncle’s house,” where the rest of her family was taking shelter, she said. “I put Sandy in the water momentarily to see if she could swim. But she couldn’t, so I scooped her up and went back inside, wading through the waist deep water to try to locate something that she could float to put her on.”

After experimenting with other pieces of furniture, Chloe placed her dog inside a plastic drawer from her closet to keep her dry — and then placed the drawer on a sofa cushion to keep her afloat.

“I finally had a plan that I believed … might work,” she said. “I knew the dangers of trying to swim in deep and moving water, but I felt I had no choice.”

She swam in the cold waters, pushing Sandy’s cushion in front of her, until she reached the slim roof of a nearby storage building; the only part of the structure not yet submerged.

There, the two sat for more than five hours before Chloe’s cousin rescued the teen and her dog with the help of a kayak. Nearby, Chloe’s family, sheltering in the second floor of her uncle’s home, watched over and talked to her as she waited for help.

When the teen returned to her grandmother’s home, she broke down, “from the relief of knowing Sandy and I survived the flood,” she said.

“My heart goes out to all the other people who lost and suffered so much more than I did in this horrific devastation,” Chloe added.

In a Facebook post after the rescue, Terry Adams, the teen’s father, called his daughter a “hero.”

“We lost everything today,” he wrote. “Everything except what matters most.”