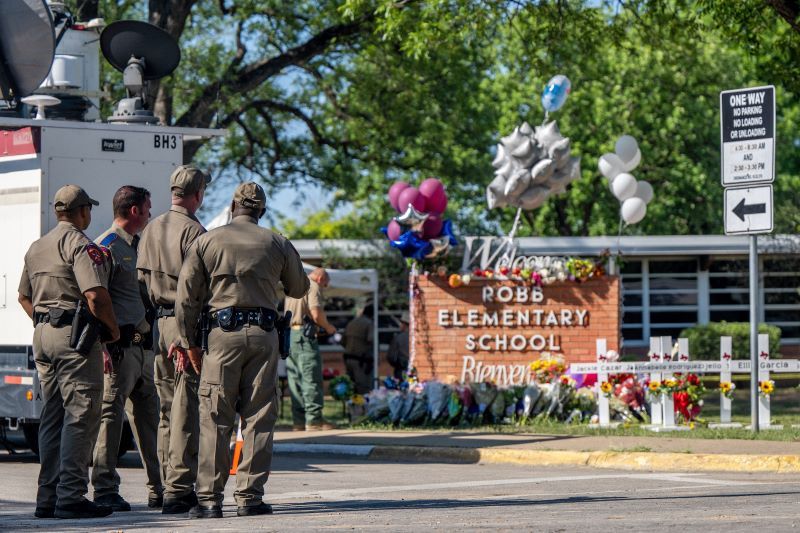 Galway man John is speaking out about his experience as an educator in America in the wake of the latest elementary school shooting.

John, 66, now works as a substitute principal in San Antonio, Texas, where he’s worked in education administration since the late 80s.

He was at work at a school on Tuesday when about 80 miles away, an 18-year-old, allegedly armed with a handgun, an AR-15 style rifle, and high-capacity magazines, entered Robb Elementary School in Uvalde and murdered 19 young students and two adult staff members.

The massacre in Uvalde is at least the 30th shooting at a K-12 school this year, according to CNN.

John grew emotional while speaking on Liveline on RTÉ Radio the following day. “These are my kids … I work in a school from pre-K to middle school… Every day I walk the classrooms,” he said, fighting back tears thinking about the murders in Uvalde.

Working in schools in America has changed greatly over the past 20 years or so, John said. “We do lockdown procedures every year, we do firearms course every month.”

John explained how the drills involve an administrator announcing “lockdown” on the intercom system, signaling the teachers to close and lock their doors, turn off the lights, secure the students away from the door, and cover the windows. Local police come through the school, knocking on doors and checking to see who answers the doors.

“They test the security of the teachers, if teachers answer the doors during a lockdown, if the doors are even locked,” John said. “This takes about 45 minutes, so the kids would be locked down in silence for 45 to an hour.”

After the drills, which vary by the size of the school, police provide a report and feedback to staff.

“By now it’s common practice,” John said. “When it becomes common practice, you become anesthetized to it. There’s just so much that has gone on that people become accustomed to. It’s so sad that we don’t remain shocked.”

He went on to say: “I’m in the state of Texas, anybody can carry a gun, but you can’t carry them into a school.

“But then if you have an unstable teacher or an unstable assistant or somebody, what’s that going to do? Or if a child gets hold of a gun of a teacher?

On Tuesday, after 19 people were murdered in Uvalde, US Senator Chris Murphy, who was a representative for the Connecticut district where the Sandy Hook Elementary School atrocity occurred in 2012, delivered an impromptu and impassioned speech on the Senate floor urging his colleagues to take action.

“I am here on this floor to beg,” Murphy said, “to literally get down on my hands and knees and beg my colleagues. Find a path forward here. Work with us to find a way to pass laws that make this less likely.”

“It’s time to turn this pain into action,” Biden said.

On Wednesday, former Texas Representative Beto O’Rourke interrupted a press conference featuring Republican officials – Mayor of Uvalde Don McLaughlin, Governor of Texas Greg Abbott, Lieutenant Governor Dan Patrick, and Senator Ted Cruz – to tell them: “You are doing nothing. You are offering up nothing. You said this was not predictable. This was totally predictable when you choose not to do anything.”

McLaughlin told O’Rourke: “I can’t believe you’re a sick son of a bitch who would come to a deal like this to make a political issue.”

On Thursday, Senate Republicans blocked a domestic terrorism bill that would have opened debate surrounding hate crimes and gun safety in America.