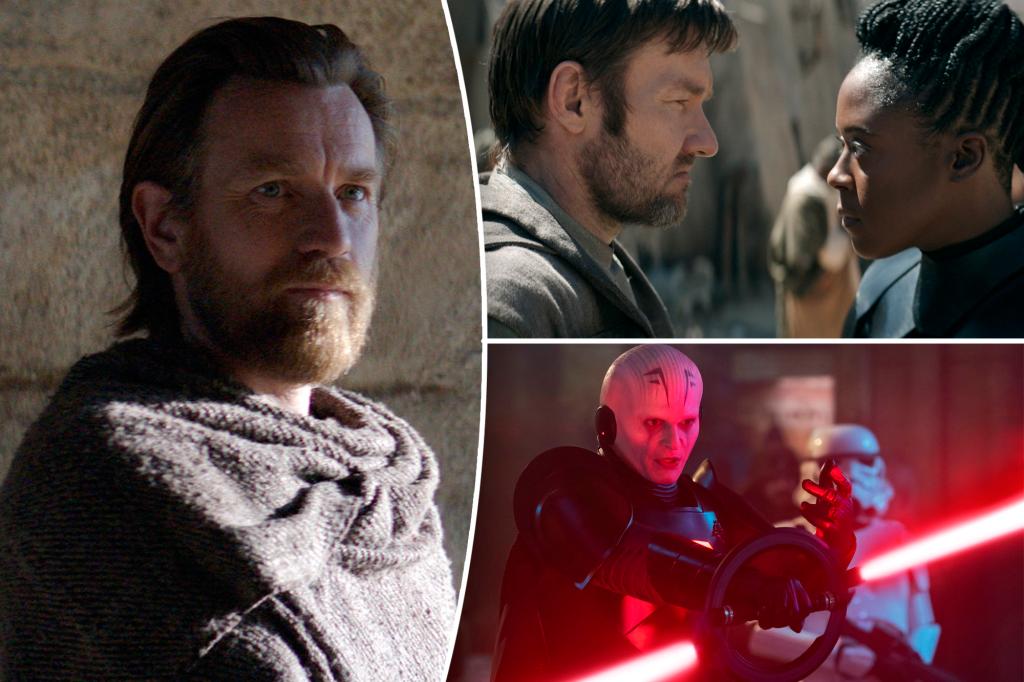 Whether you love George Lucas’ “Star Wars” prequels like a cuddly Ewok, or hate them with the power of a thousand Death Stars, it’s hard to deny that Ewan McGregor was a smash as young Obi-Wan Kenobi back in 1999.

On Disney+. New episodes out every Friday.

Twenty-three years ago — long before origin stories were in vogue — the actor shrewdly conceived how a preternaturally wise whippersnapper version of Alec Guinness might behave and explored the transition of student to hermit. McGregor and Liam Neeson as Qui-Gon Jinn were, 100%, far better additions to “Star Wars” than any of the bland performers in J.J. Abrams’ more recent wobbly trilogy.

And so it’s a pleasure to welcome the Scot back in “Obi-Wan Kenobi,” Disney+’s latest series that’s set a long time ago, in a galaxy far, far away (some nine more are coming soon). The first two episodes of the sci-fi drama that dropped Friday don’t suggest the addictive triumph that the first season of “The Mandalorian” was, but the Force is mostly with it.

The show takes place 10 years after the events of 2005’s “Star Wars Episode III: Revenge of the Sith,” which saw Anakin Skywalker turn into Darth Vader — the OG mask enthusiast.

Although the math is confusing, it actually makes sense. McGregor the actor is 17 years older now, true, but the story of the aughts movies occurred over 13 years and the hottie was prematurely sent into a midlife crisis with a silly beard. Now, at 51, he is closer to his character’s real age.

A decade on, Obi-Wan calls himself Ben, as he does in 1977’s “A New Hope.” He lives on the two-sunned desert planet of Tatooine, keeping an eye on 10-year-old Luke from afar and attempting to survive in secret as the last remaining Jedi are violently hunted down by Inquisitors (led by a freaky Rupert Friend).

This is where “Obi-Wan” starts to resemble “The Mandalorian,” “Star Trek” and “Stargate SG-1.” Obviously it would be no fun to watch a burlap-hooded man cower in a cave all day, so there are unplanned missions that take him off-world, where we meet big-personality characters. Kumail Nanjiani, with his signature dry humor, plays one underground figure we’ll hopefully see more of.

All the while he’s pursued by a dogged Imperial Inquisitor named Reva (Moses Ingram).

Early on, little Leia (Vivien Lyra Blair) plays a major role from her home planet of Alderaan with her adoptive father Bail Organa (Jimmy Smits, back from the prequels). She’s already strong-willed and precocious as a preteen, and the writing goes too far with the spicy attitude. We don’t need Princess Doogie Howser.

What’s missing from “Obi-Wan” is the same Jedi sais quoi that’s been absent from most of the overstretched “Star Wars” franchise (outside of “The Mandalorian”) since Disney bought Lucasfilm: the sense you’re seeing something sparkling and new. The production is expensive with detailed CGI set pieces and creatures. However, there’s very little distinction to the filmmaking. Nothing innovative or cool. Aesthetically, the series is part of an ongoing effort to water down an iconic American blockbuster and make it look like just another “Star Wars” product.

Appearances aside, the story so far is engrossing and McGregor continues Obi-Wan’s story in a richly emotional way — something that Alden Ehrenreich’s awful Han Solo movie couldn’t do.

The most important thing to note (this isn’t so much a spoiler as a sweetener) is that in the first two episodes of “Obi-Wan Kenobi,” Jar Jar Binks does not appear. Everybody can relax. Reportedly he’s off annoying somebody else, far, far away.