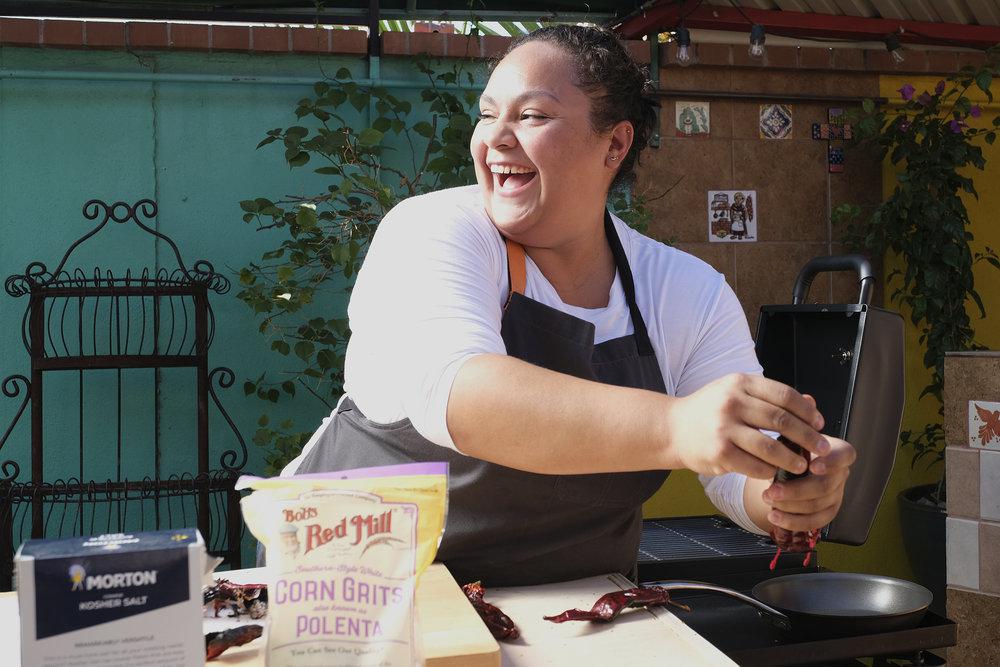 From the glorious Sonoran desert landscape to the fascinating Southwestern ingredients, part one of the season finale in Tucson kept me wholly engaged. That our local hero, Evelyn Garcia, shone so brightly was the prickly pear fruit on top.

My grumblings about Top Chef Houston absconding from our city were, I confess, premature. I hadn’t realized that over the years when I drifted away from the show, its growing culture of monetization had multiplied the locales involved in a single season — the better to maximize profit and audience numbers.

I reserve the right to sneer at lame “partnerships” involving “proteins by Chipotle” and “our friends at Vrbo,” but this week’s Tucson episode featured no such annoyances.

Instead I got to ogle an agricultural heritage garden I’d kill to visit, and hear the legendary Carlotta Flores detail the traditional air-drying of carne seca, the dried beef that helped make her restaurant, El Charro, so famous.

Someday, I told myself as I eyed the carne seca winched up high in its swinging “cage,” I am going to dine there. El Charro was founded by Flores’ aunt in 1922, which makes it the oldest continuously family-owned Mexican restaurant in the country.

The Quickfire Challenge, staged in El Charro’s colorful courtyard, had the four remaining chefs create their own carne seca dish. I loved learning that El Charro reconstitutes the finely shredded beef with equal parts of green chile, onion, garlic and seeded Roma tomatoes, so that the meat rehydrates.

Evelyn’s Texas upbringing really helped here. But she had internalized the “don’t play it safe” lesson from the Bludorn episode. While she invoked her mom’s admonitions (“pan better be hot; gotta be enough oil, you gotta toast the carne seca before you do anything else”), she won Carlotta’s admiration by employing grits as a backdrop.

In the end, Evelyn’s creamy grits with guajillo chile, carne seca and chayote relish couldn’t best Sarah’s imaginative Michigan jerky take on the ingredient. Sarah’s use of morels and blackberry salsa with a carne seca gravy that she ladled over polenta with soft egg won the challenge — and proved that her triumph in the last fishing episode wasn’t a fluke.

Having to scrabble though all those Last Chance Kitchens seems to have honed Sarah as a competitor. I kept thinking of Rich Strike, this year’s out-of-nowhere Kentucky Derby winner, as I watched her.

Buddha messed up his tortilla fry job for his “upside down tostada.” I knew when he plopped on in for a second go to crisp it up that he was in trouble, and sure enough, Carlotta ever so politely told him it was “a little bit greasier than I thought it should be.” Ouch.

Damarr’s grilled avocado, dressed with a carne seca vinaigrette that struck me as a cool idea, was found wanting in the texture department.

And so our quartet headed out to Tucson’s Mission Garden, a living agricultural museum of plants adapted to the Sonoran Desert. It looked like my happy place. And garden guru/ tour guide Jesus Garcia turned out to be my new favorite person. His joy in his domain is palpable.

The chefs were there to sample and gather ingredients for the Elimination Challenge, which asked them to create one sweet and one savory dish featuring cactus and chiltepin.

Guest judge and Tucson native Maria Mazon, an alumna of Top Chef Portland, told them the tiny bullet-shaped chiltepin is the only chile pepper native to the United States. I enjoyed watching their eyes widen as they sampled one. “A front-of-the-mouth heat which is very quick,” observed Damarr.

Heaped in baskets were all manner of cactus paddles and fruits: deep rose-red, green, smooth and knobby, fresh and dried. I found myself wishing the cameras could linger there while Garcia told us more and more about them, and about the 4,000 years of agricultural traditions attaching to this land. I wanted to taste the lemony rind of the barrel cactus fruit Garcia sliced open for sampling. They looked like “tiny pineapples.”

It all resonated for me — and, I suspect, for many Houston viewers — because we’ve grown up, like Evelyn, on Southwestern flavors and foodways. I enjoyed the scramble for corn, beans and squash (“the famous three sisters,” said Garcia) and the dash through bowers and arbors of fruit trees and vines, where quince, grapes and fig dangled for the taking.

Back in the fancy prep kitchen, Sarah used her extra 30 minutes of time “to adventure” with these new-to-her ingredients. She pickled chiltepins to use in a vinaigrette and candied some dried barrel cactus buds for her sweet dish.

Damarr, who had You-Tubed cactus-pad cleaning during their two week break, set to work on his nopales and started on a prickly pear barbecue sauce for pork shoulder.

Buddha gamed out a tom yum soup with chiltepin in the broth and busied himself making a cake with dried saguaro fruit and confecting both barrel-cactus-fruit ice cream and prickly-pear snow. The barrel cactus buds contained “beautiful seeds that are very similar to vanilla bean,” he told the camera. I longed to taste them.

Our hometown hero Evelyn worked on a nopal relleno, an idea that grabbed my attention. I was less taken with her notion of sour orange curd with prickly pear granita; and boy did I turn out to be wrong about that.

There was surprisingly little panic in the three-hour kitchen session. Sarah endured a messy saguaro-fruit ice-cream explosion and pivoted to nitro cooling instead. Damarr overcooked his beans and pivoted to a bean puree with some prickly pear worked in.

Then it was showtime at the most beautiful dinner table of the season, with a colorful runner and a desert mountain backdrop, feathery huisache trees swaying against the sky.

Sarah laid down lamb with grape salad in pickled chiltepin vinaigrette, finished with dried chiltepin chimichurri and some smoked yogurt. “What’s that crunch?” asked a judge. It was bread she had toasted to soak up the vinaigrette, and the Mission grapes themselves, served up with their seeds. “For me that’s a pleasant texture,” she said.

“This is the silence of really good food,” said Tom. “These two dishes are extraordinary.

Which made me nervous, because Evelyn was yet to come.

Damarr presented his pork shoulder with prickly pear BBQ glaze, red bean puree and some nopales he had grilled at the last minute.

Evelyn introduced her delicate-looking cactus-pad relleno filled with shrimp puree that had been seasoned with garden herbs, with one of her characteristic flourishes of raw nopal relish spiked with Fresno and chiltepin chiles on top. Plus some marigold petals for good measure. Oh yes, she told the judges, she’d added some chiltepin chile oil as well.

Now that I wanted to taste. “She really went out of her way in creating something very different, elegant,” said Jesus, the Mission gardener. Kristen approved “creativity of how it’s wrapped and rolled.” I was feeling pretty good about it until Padma chimed in with, “I could’ve used a little more chiltepin.”

My interest flagged a bit during the cake-and-ice-cream portion of the tasting. But that’s just me, I am always keener for savory than sweet.

“Buddha’s dessert looks like it was made in a museum,” observed the ever-quotable Sarah. Her ice-cream melted, in contrast, although Jesus said that the way she ground the barrel-cactus seed made it really taste like saguaro to him. High praise.

Damarr served up a rectangle of prickly-pear-glazed cake with buttermilk cheese and saguaro fruit that recalled his winning carrot cake in a previous episode.

Then came the judges’ skull session. When Tom declared that Sarah’s lamb dish, in its use of the cactus and the chile, was “on a par with any 3-star Michelin dish I’ve ever had,” I just about stopped breathing.

And he did — foiled by a barbecue pork dish that never quite came together for the judges.

Our gal goes on to the finale. She just might win this thing.