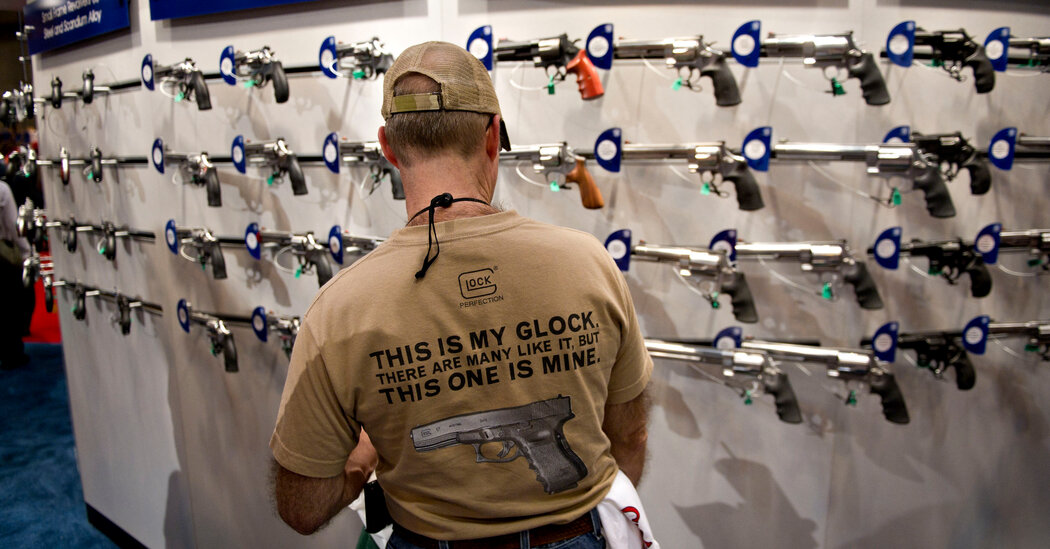 Gun control advocates are petitioning the Federal Trade Commission today to investigate and regulate the firearms industry as it has with tobacco, alleging that gun manufacturers use deceptive advertising practices.

The petition, which DealBook is first to report, is the latest salvo aimed at the marketing tactics of an industry that has largely been protected from liability for the harms of its products because of federal laws. The groups urging action by the F.T.C. include Brady, the Giffords Law Center, March for Our Lives and the FACT Coalition.

Gun marketing promotes an illusion of safety, the petitioners say. Americans have “been falsely led to believe that gun ownership is a safe way to protect their home and family,” they argue. The C.D.C. reported 45,222 deaths from gun-related injuries in 2020 (an earlier version of this item misstated the year, because of an editing error). The F.T.C. “has effectively given the gun industry a free pass,” the petitioners say.

Advocates have asked the F.T.C. to investigate the gun industry before, starting in 1996. The F.T.C. can choose to address or ignore this latest petition, which comes as the Biden administration has expressed support for more transparency on gun manufacturers’ operations and state-level lawsuits have begun to break through the industry’s barriers to litigation.

The F.T.C.’s enforcement of federal consumer protection law could look to these state precedents, like the Connecticut consumer law that allowed the Sandy Hook families to sue. “If a company violates the consumer protection laws with false advertisements, that is not protected activity,” said David Pucino of the Giffords Law Center. “They are breaking the law.”

Shell will take a hit of up to $5 billion by pulling out of Russia. This morning the British oil giant detailed the size of the write-off resulting from its exit from joint ventures with Gazprom and other activities in Russia. It’s big, but high energy prices are expected to bolster Shell’s bottom line this year, with analysts forecasting it to make over $30 billion in 2022.

Treasury secretary Janet Yellen talks crypto. Today, in her first speech focusing on digital asset regulation, she will call for “a consistent and comprehensive policy framework that promotes responsible innovation of digital assets and appropriately assesses and mitigates the risks they may pose,” backing up President Biden’s recent executive order on crypto.

Central bankers are backing higher interest rates. The minutes from the Fed’s March meeting said that “many” officials would have preferred a bigger rate increase than the quarter-point rise they settled on, but held off because of concerns over the impact of the war in Ukraine. Markets now expect the Fed to make half-point increases in May and possibly June.

Corporate bankruptcy filings are at their lowest levels in over a decade. Only 87 U.S. businesses filed for bankruptcy in the first quarter of the year, according to S&P Global Market Intelligence, the lowest first-quarter total in at least 13 years. Companies have benefited from pandemic stimulus programs and cheap funding, but rising interest rates may put balance sheets under more pressure in the quarters ahead.

Fanatics raises $1.5 billion in fresh funds. The round, which values the rapidly growing sports merchandise company at $27 billion, included investments from several leagues, like the N.F.L. and M.L.B., as well as players associations and team owners.

Twitter’s investors appear convinced that Elon Musk can make the social media company better. The company’s stock is up 30 percent since the news broke that Musk had bought a large stake in Twitter and would join its board. That has added some $9 billion to the company’s market value. But when Musk becomes a director at Twitter, he may also bring some costs.

What will happen to Twitter’s insurance premiums? Most public companies carry policies that shield directors and officers from personal liability, known as D&O insurance. Musk’s past legal run-ins include a settlement with the S.E.C. over a market-moving tweet about Tesla (which Musk is trying to scrap) and a defamation lawsuit by a British cave explorer, whom Musk called a “pedo guy” in a tweet (which Musk won). In buying his Twitter stake, Musk appears to have filed the required disclosures late and may have initially used the wrong type of form. “I would be very concerned if I was the insurance company asked to underwrite and provide it,” Peter Taffae, a managing partner of the D&O insurance brokerage Executive Perils, told DealBook.

Tesla has faced high premiums in the past because of Musk. After Musk settled with the S.E.C., Tesla said in a regulatory filing that insurers were asking for “disproportionately high premiums” for D&O insurance. Instead, Musk briefly insured the company himself. Tesla paid him $3 million for a three-month term before it signed a new policy with “third-party carriers.”

Twitter has had its own issues. Last year, the company reached an $800 million settlement with shareholders in a lawsuit that claimed Twitter had inflated its user numbers. “Twitter had its own D&O challenges even before adding Musk,” said Priya Cherian Huskins, a partner at Woodruff Sawyer. “Adding Musk to the board might be a great thing for investors, but the calculus for insurers is different.”

— President Biden, in remarks to a conference of unionized trade workers. Days before, workers at an Amazon warehouse on Staten Island voted to form a union, the first in the U.S. at the e-commerce giant. (The White House later said that the president was merely expressing general support for unions.) Meanwhile, the success of the independent, crowd-funded union drive at Amazon has traditional labor unions rethinking their tactics.

Many public companies in the U.S. are approaching the deadline to file their annual proxy statements, which among other things detail how much top executives were paid in the prior year. And while wages are up for the average worker, many C.E.O.s got much bigger raises.

This week, The Wall Street Journal ran the numbers for companies that have reported so far, and found that the average C.E.O. in the S&P 500 received an 11 percent raise last year, to levels nearly 190 times what the median worker earned. In a year of pandemic disruptions, when many people’s pay lagged inflation, executive pay packages are likely to draw scrutiny, especially from those who want to raise taxes on the wealthiest.

Here are a few of the biggest C.E.O. compensation packages of 2021 so far, which include the value of stock-based pay that may not be realized if performance targets aren’t met:

Best of the rest

We’d like your feedback! Please email thoughts and suggestions to dealbook@nytimes.com.