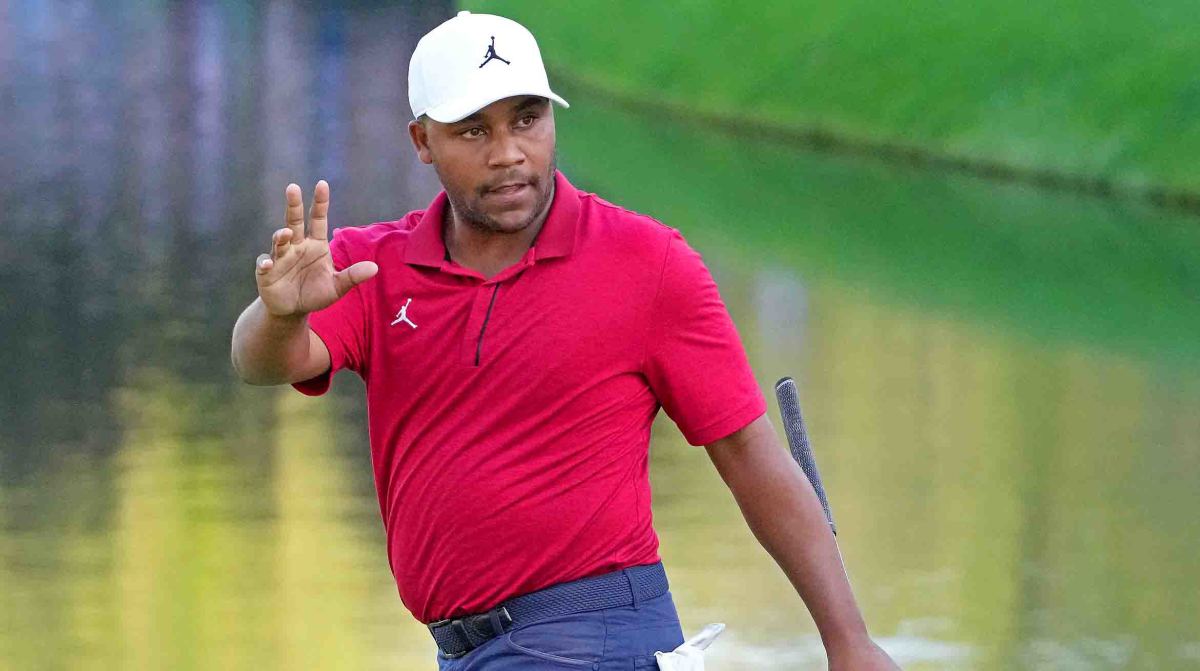 What’s it like when your golf game, good or bad, doesn’t bother you?

When score matters, but it’s not life or death.

What’s it like to smile throughout your first round at Augusta National, because it is your first round in the Masters, and you are here because of your play and not because you bought a ticket?

To know those answers you would have to be in the head of Harold Varner III.

And if you ask him, he will tell you the basic answer is “It’s Sweet.”

Shooting a 1-under 71, Varner finds himself tied for 10th with eight other players, but the biggest, baddest name of the group is five-time Masters champion Tiger Woods.

While Woods took the old fashioned or conservative route in shooting 71 with three birdies and two bogeys, Varner’s scorecard looked more like a juggling act with five bogeys, four birdies and an extremely impressive eagle, that in Masters parlance means he earned two crystal glasses.

“I could get my foot in the ground,” Varner said of his stance in the right pine straw on the par-5 13th. ”It was super”

Super after hitting his second shot to within a foot, but before the shot Varner’s caddie Chris Rice was trying to talk his charge off the ledge. Varner would have none of it.

“I was hitting it,” an emphatic Varner said after the round. “I mean, until he starts hitting them, then he can have more say.”

Varner couldn’t even tell you the yardage he had on the 4-iron shot, since he doesn’t carry a yardage book.

After further investigation it was 227 yards.

For Varner that seems extraneous information. He’s here to execute shots and that’s what he did as he jumped up the leaderboard from 3 over after a bogey on the devilishly short par-3 12th, to the 1 under finish with the eagle plus birdies on the 14th and 16th holes.

“I was trying to make birdies on every hole,” Varner said. “When you see I think four, five (under) leading and you are sitting at even par, you are trying to birdie the next hole. I don’t think it’s anything out of the norm. Unless you are trying to just make pars.”

Varner lives just two and half hours away in Charlotte, North Carolina, though never wanted to come to The Masters on anything but an invite. Now that he has accomplished that goal, he wants to do it his way.

That way may be a bit unconventional, after all he is one of the few minorities that play professional golf.

Varner went to Eastern Carolina University, not a golf powerhouse, and if not for his coach Kevin Williams, Varner would not be where he is today.

“My parents didn’t go to college, so I didn’t really know anything of the college experience, and I had an unbelievable coach that just cared a lot about me, not so much the golfer,” Varner said. “It changed my life. He was hard on me, but it helped me out a lot.”

Winning his first professional event at the Saudi Invitational in Saudi Arabia in February changed everything, moving him from 94th in the world to now 40th. It also validated what he has been doing — even though he had been close a number of times, he never was able to close the deal, not until that Sunday halfway around the world.

Now playing in his ninth major championship, the 31-year-old is focused, excited and ready to let his game speak for itself.

The fact it’s the Masters only makes it more invigorating.

“I told my caddie on the first hole I could hit it anywhere,” Varner said. “Just like let me hit it, and it went straight, so that was comforting, and then just got a little bit more comfortable as the day went on.”

Now with the first round in the books, Varner returns Friday morning for an early tee time and the chance to not only chip away at Sungjae Im’s 5 under lead, but to continual to validate his game.

“Nothing, no one is going to die. I just get up there, and I try to hit the best shot I can and keep doing that on every shot,” Varner said of his enlightened philosophy. “It’s just all about perspective, I think. I’ve always thought that.”

– Tiger Woods Dazzles in Front of ‘Electric’ Crowd
– On Thursday There Was Tiger, and Everyone Else
– Woods’s First Round Was Both Vintage and New-Age
– Cam Smith, Man of the People, Is a Man on Fire
– Sungjae Im Leads After Thursday Unlike Any Other
– Varner Soaks In First Round at Augusta National
– Round 2 Tee Times: Tiger Woods to Tee Off at 1:41 ET