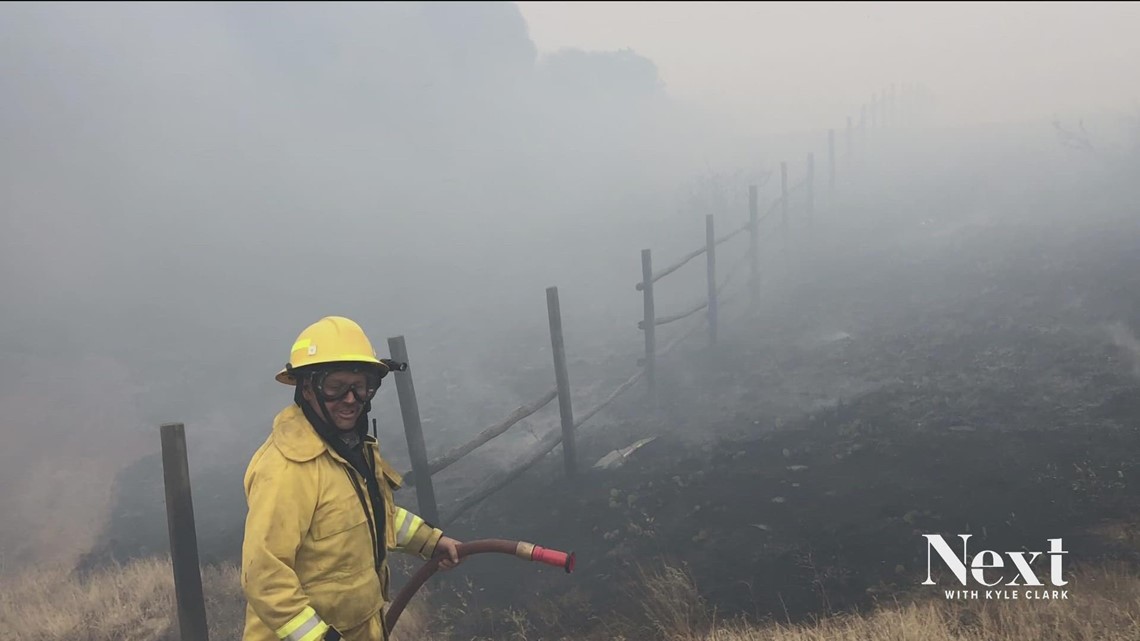 In Colorado, as many as 80% of the state’s firefighters are volunteers. It’s not always financially feasible to hire firefighters, since funding is a local issue.

DENVER — Firefighters say fire danger is stretching into a year-round risk. At the same time, there aren’t enough firefighters.

That’s the reality in Colorado, where the state relies heavily on volunteers for protection from fires.

He said a fire on a day like Thursday would be hard enough to stop with enough people.

“What’s that going to look like if you have four responders and two trucks on a day like today?” he asked. “You are going to lose communities to fires.”

That’s what is at stake in Colorado, where as many as 80% of the state’s firefighters are volunteers.

That group includes the Hugo Fire Protection District, around 20 minutes southeast of Limon.

Solze said the local veterinarian, grocery store owners, construction workers and town employees are all on the department.

The chief himself is a contractor and rancher.

Solze said the volunteers who responded to the 2020 Cameron Peak Fire all have other jobs as well.

“One is a maintenance employee for the town of Hugo,” he said. “There were ranchers.”

These volunteers are heavily relied on during an emergency, but retention and recruitment are huge problems. These problems have only been getting worse over the last 30 years.

“Culture has changed. Volunteerism, 30, 40, 50 years ago was important to the culture. You don’t see that anymore. A lot of it is busy schedules, two or three jobs, families,” he said.

“Many people want to be volunteers but don’t have the commitment for the initial training,” he said.

The training can be as much as three times a week for up to six months.

“Firefighting today is much more complicated than just getting together and putting out a house fire,” Briese said.

Briese also said construction materials are different these days. For example, when a home burns, it changes the toxicity of the smoke, and that makes some volunteers think twice about signing up.

“Told me ‘it’s a dangerous occupation even though I want to do community services,'” Briese said about conversations with volunteers. “I don’t know that I want to expose myself to those toxins.”

With wildfires year-round and not enough people, Briese said every week in parts of rural Colorado, dispatch will call the closest volunteer department, but there won’t be anyone to respond. They wait a few minutes, then call the next-closest department. Sometimes they have to search through three or four agencies, spending as much as 30 minutes before finding someone to respond to an active emergency.

RELATED: Experts warn of increased risk of wildfires in Colorado this spring and summer

In the past, when calls for help were less frequent, organizing locally and responding was feasible. But with a growing population and more 911 calls, the demands are becoming more intense for volunteer agencies.

Hugo’s fire protection district, funded with the help of tax dollars, has a budget of $100,000 every year to cover 500 square miles in Lincoln County. They consider themselves lucky with 22 volunteers and that budget.

They are surrounded by other fire agencies, some with a tenth of the budget raised through pancake breakfasts and chili cook-offs.

And it’s not always financially feasible to hire firefighters, since funding these agencies is considered a local issue.

“Communities don’t have the money. That’s the simple part of it,” Solze said. “They don’t have the money to sustain a career department. If they do, it might only be one person. A paid chief or paid EMT who stays at the station for eight hours a day and then goes home.”

The state does help with training, reimbursements and resources, but it hasn’t fulfilled the overall need.

RELATED: Many firefighters in Colorado don’t have the gear they need

SUGGESTED VIDEOS: Full Episodes of Next with Kyle Clark