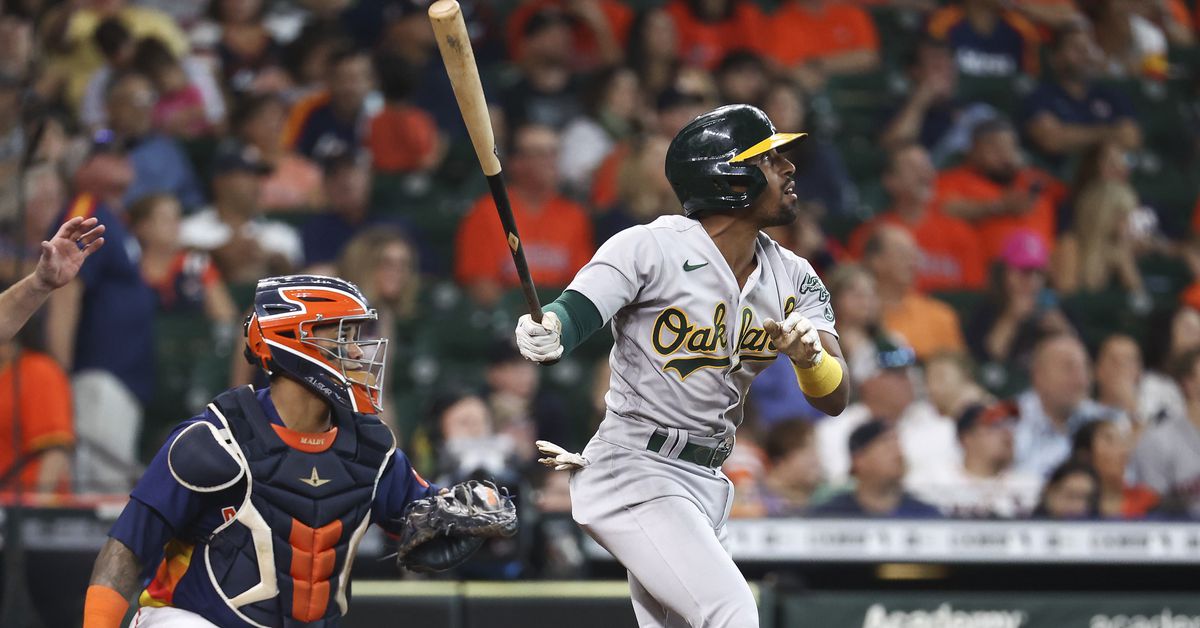 First and foremost, a million thanks to Margie Kahn, one of the original ANers, for quickly transcribing this interview so it could run before the season starts. Thanks also go to A’s media relations (Mark Ling), and of course Tony Kemp. I hope you enjoy. -Nico

The first thing I’m wondering, I talked to Kevin Smith about this, is you had the shortened spring training is one thing but the time before, I know what it’s like as a fan to wonder what’s going on and wait for that moment. But I’m trying to imagine what it’s like as a player because you’re human, and I’m just wondering from the human side what that period of time was like.

TK: Yeah, there’s a lot of making sure your body is recovering the right way, and push it when you have to and just understand that it’s…many people don’t understand that it’s 162 games plus spring training plus the playoffs, and it’s taxing on your body. I think in the shortened spring you just have to make sure that you’re taking care of your body the best way you can.

What about before the lockout actually ended and you’re wondering when, if, how? What was that like?

TK: Honestly, for me I just had my first kid, so I was, it was just my wife, my daughter and I at home, and figuring out that parenting life at the beginning, and it was nice to have that extra time at home. So honestly, to be real, I really didn’t stress about the lockout or anything because I knew I was coming back to Oakland, I knew I was gonna be set up here, and I just took one day at a time and lived as presently as I could.

Did you have a pretty good idea that you would not be traded? Because obviously we knew there was going to be a lot of movement.

TK: Oh, no. I had no idea what was gonna be going on. I’ve been traded twice before so I just put my head down and worked hard, and if you get traded, it is what it is. Like with Manaea, you say you’re locker buddies for three years and then all of a sudden you’re traded and you’re facing him the same day. So you see some crazy things in this game.

So this is going to be your first year being away from a child, from your daughter. What’s that feel like?

TK: Yeah, it’s definitely gonna be a little different. I definitely got spoiled being able to be at home all those hours and see her start to use her hands, start to grab things, and the progressions that she had. So we’ll see. But they’ll be on the road with me for a good bit of the year, so I’m definitely excited for the season, to just go into it as a dad.

One thing I thought was very cool is during the pandemic the “conversations about race”. I’m just wondering, was there a moment that you decided you were going to do that? Or would it have happened if it weren’t for the pandemic?

TK: I feel like everything happens for a reason, just because I would not have had the time to start the Plus One Effect, do that initiative, to actually have the time to sit down, talk with fans, and really actually be there and have good conversations with them. My wife helped me out with a lot of conversations. But I felt like it was a time, especially in my career, there was just a lot going on and it was time for me to speak up about some of these issues that were going on, just educate people on being in someone else’s shoes for once.

Was it something that came out of recognizing a societal need or more from personal experience?

TK: I think it was a little bit of both. I think my personal experience, getting pulled over by the police for a rolling stop and having my car searched for a rolling stop, having extra cops come for no reason, I was 17 years old in high school and I didn’t know any better. Just one of those things, that was one of my experiences. And seeing it from the societal issue, there’s a lot of racism that’s still prevalent to this day that people are oblivious to because it doesn’t happen to them personally. So it was good to educate people and just let people know what was going on around them.

Were there moments in those conversations where you’re like, “I made a difference”?

TK: 100%. Definitely people’s responses to what was going on and how they were receptive to the conversations, I think that definitely made a big deal because they were able to understand, and people were actually willing to educate themselves on books, documentaries, podcasts, and I feel like I made a difference.

What’s the one – if there’s one thing you would want people to know, like here’s an audience that’s going to read this, what would you want them to know?

TK: I think the biggest thing is just treat people how you want to be treated. It’s such an elementary school golden rule, but if everybody treated everybody else how they wanted to be treated personally, the world would be a better place.

I feel petty switching to baseball, which is less important, but it’s also what we’re united by. You as a hitter…One theory I have is that probably hitters at the plate guess location or pitch more than fans realize. Just watching games you get that feeling sometimes. How much, your approach at the plate, how much are you guessing or eliminating pitches?

TK: Honestly, it all depends on the pitcher. Just being able to watch him throughout the game, how he’s landing his changeup, how he’s landing his slider, his offspeed pitches. But I wouldn’t say that I’m a guess hitter, I’d say that I go up there with a certain approach, on a strike, swing at strikes, take the balls, and that’s kinda gonna be my approach all of pro ball and it’s led me to some success, and I feel like that approach is gonna lead you to have better swings and better at-bats. One big thing I want to go into this year is never give any at-bat away. Go into every at-bat, make it as hard as you can for that pitcher to go in there and throw strikes, and never give anything away. If I can take that same approach into this year, I’ll be good.

It seems like Jed Lowrie is a good role model for that mindset.

TK: Yeah, I definitely got to pick his brain last year about what he was thinking or what his approach is, and he never gets off the fastball. If you’re always ready for 95, you always can adjust to slower speeds. So as long as you’re just looking for that good pitch to hit and then you can adjust to your offspeed approach, you’ll be a good hitter.

I can see how when you’re in the box, you can pick up on a pitch, that kind of thing. But you see players talk to each other a lot, to the on-deck hitter. What are you able to pass along that’s real for someone who’s not in the batter’s box?

TK: I think it’s when you’re able to pass something along to someone that’s on deck, they might say his fastball has little bit of rise through the zone, which means if it starts on this plane it’s gonna stay on this plane. There’s a lot of different things, the changeup fades or it’s a downer or his curveball is 12-6 or it’s 11-5. Just the breaks of his pitches and how they’re moving is pretty much what we’re relaying.

So much of hitting is reaction and muscle memory, so how much of that can you process? How meaningful is that as you are walking to the batter’s box?

TK: I think for me, one thing I’ve been able to differentiate is once you’re in the cage and you’re working on things, that’s when you really work on how you want to work on your mechanics. Once you go into the game, it’s everything’s taking over and you’re just going up there and having your approach and putting your swing on good pitches, and the rest takes care of itself. I’m not the type of hitter that can go in there and think about mechanics and then put a good swing on something. I have to trust myself in the cage and do my thing and then once I go to the box, the rest is have fun and take care of itself.

In terms of position, you play infield and outfield. Growing up, as a youth, what was your position?

TK: So, coming up I played shortstop and then once guys started hitting the balls more and more to the outfield I started moving gradually toward the outfield. Once I got to college, I was an outfielder, and then one of our guys got hurt and so I went to second base. It was actually a blessing in disguise. He was really helping me out with my hands. I went to the Cape, figured out how to play second base better, and then got drafted as a second baseman and played second base up until Double A, and then we had Jose Altuve when I was in Houston and they said hey, you know, we want you to play more outfield.

Once I figured out that they had a plan for me in the outfield, that’s kinda when I understood that I was gonna be, my path in the big leagues wasn’t gonna be just playing infield, it’s gonna have to be play all over, and so I feel like being able to play multiple positions has allowed me to play in the big leagues longer and longer and continue to be good anywhere defensively.

TK: Second is becoming more and more natural. When you’re in the outfield, it’s kinda like riding a bike because you’ve done it your whole life. But being able to win a Gold Glove in the minor leagues at second base really showed how much hard work I put into it, and going in last year finished top 10 in Gold Glove votes, and just to be able to understand if I put in the work and I really do my routine, put my work in, the rest takes care of itself.

Is there one that you enjoy more?

What’s the reason behind it?

Are you glad they changed the dirty slide rule?

TK: Yeah. I feel like it’s allowed you to hang in there longer and it’s prevented a lot of injuries, so I like the rule, yeah.

Last question: I always like to end on a personal note. Your personality: fans want to know you more than as just a second baseman or left fielder. Who are you?

TK: A human being. A human being. That’s it. Sometimes fans just forget that we have issues and things going on in our families, just how things go on in their families except we have to tune that out and go play a baseball game. Two sides of the brain. Just forgetting that stuff once you step foot onto the field and then being able to actually step off the field and be a dad. I just want fans to know that we’re human too and we do have feelings and emotions.

Stay tuned for my interview with Kevin Smith, who made the team the same day we chatted. (I only take partial credit, though.)