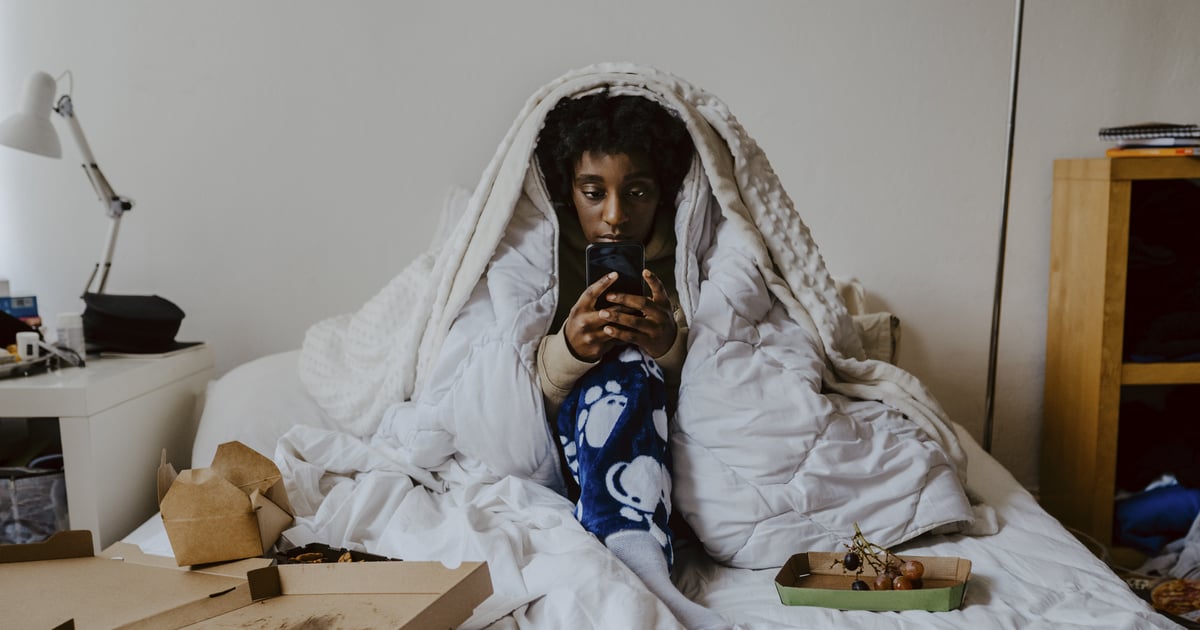 Image Source: Getty
Katelyn Polich, 24, joined TikTok on a whim. But when COVID-19 swept the country and her bartending job was put on pause, she found herself spending more and more time on the app. Among viral dance trends and food hacks, she wound up on ADHD TikTok.

You’ve probably landed there yourself. TikTok videos with the ADHD hashtag have received 10.4 billion views. Many of them involve someone asking if you experience a seemingly mundane list of symptoms (e.g. forgetfulness, hyperfocusing, fear of rejection, daydreaming, zoning out), often followed by an implication that, if you experience any of these, you may have ADHD. The comments section of each video is flooded with feedback like, “this is actually my brain” and “why is this so relatable?”

The longer Polich stayed on ADHD TikTok, the more convinced she became that she fit into one of these categories. “They were explaining symptoms, especially with girls and women, that tend to go undiagnosed. And I was like, ‘Man, this really sounds like me,'” Polich says. She’d previously been diagnosed as depressed, bipolar, and having generalized anxiety. She’d tried a multitude of medications and antidepressants. “I never felt like anything helped,” Polich says. After watching hours and hours of ADHD videos, “I just knew inside, this was it,” she says.

“They were explaining symptoms, especially with girls and women, that tend to go undiagnosed. And I was like, ‘Man, this really sounds like me.'”

And Polich was right. Four months after joining TikTok, she decided to see a psychiatrist who specializes in ADHD and was officially diagnosed. She’s since been receiving specialized treatment and medication for the condition.

While Polich’s experience isn’t rare, it’s not exactly the norm either. Dr. Hamdani tells POPSUGAR that the among patients who come to her because they think they have ADHD from TikTok, “about 50 percent of the time they don’t.” There’s an abundance of misinformation about ADHD on TikTok, she says, and people tend to get attached to a specific diagnosis without speaking to an expert. Both of these factors can contribute to the high rate of incorrect self-diagnoses.

A recent study published in The Canadian Journal of Psychiatry reviewed the top 100 most popular videos about ADHD on the app and found that 52 percent of them could be classified as misleading. For example, 71 percent of those videos misattributed certain psychiatric symptoms as being specific only to ADHD (including anxiety, depression, anger, relationship conflicts, dissociation, and mood swings). Even worse, “None of the misleading videos recommended viewers to seek out a medical, psychiatric, or psychological assessment before attributing these symptoms to ADHD,” the study explains.

Another downside to incorrectly self-diagnosing? You close yourself off to other treatment opportunities and finding the right diagnosis. So many people who come to see Dr. Hamdani are set on being diagnosed with ADHD and wind up disappointed, she says. “I’ve had some patients that are just like, ‘You’re an ADHD specialist, but you’re telling me this is not ADHD? What’s that about?'” she says. “I think it’s important not to get too entrenched in a single diagnosis until you get an opportunity to work it through with a professional.” You may find that a different diagnosis is appropriate, or none at all.

The same is true for specific treatment plans; not everyone who is diagnosed with ADHD, for instance, requires medication. There are plenty of helpful behavioral management techniques and coping strategies you can look up and learn instead, says Dr. Hamdani. “I’m a psychiatrist, and I definitely see that there is a role and a place for medication and pharmaceuticals to treat that [ADHD],” she says. “But at the same time, especially for women and especially for longitudinal care, I’m so much more passionate about building good, healthy habits and learning how to understand your brain, manage your brain, and utilize diet, exercise, and sleep and fill in those gaps so that you don’t have to rely on medication.”

Polich, a recently college graduate, sees how incorrect self-diagnoses could be especially dangerous for students, who may decide to explore self-medicating with a prescription drug like Adderall, which is used to treat ADHD. The medication is “prevalent everywhere” on college campuses, Polich says. But although she says Adderall is widely prescribed and therefore can be seen as “a not-so-bad drug”, it can be abused and is addictive, so it’s crucial that it be used under a doctor’s close supervision, only in cases where it’s necessary. Getting evaluated by a professional allows people to find the most effective and safest ways to manage their symptoms, which may or may not include medication. An official diagnosis also helps you access supportive resources. If you’re in school, an official diagnosis may make you eligible for extended testing times, for instance.

For some, having an official diagnosis has additional, less tangible benefits. “Getting that diagnosis really helped me understand myself a little bit more,” says Rebecca King, MS, RDN who now works with ADHD clients that experience disordered eating. King wasn’t diagnosed until she was 19 after struggling for years with an eating disorder and day-to-day tasks before learning ADHD was a root cause.

So is there any validity to self-diagnosis? Polich says yes. When she discovered ADHD Tok, she’d already been in therapy since middle school. “So by the time I was 23, my psychiatrist and therapists are not at the point of supplying me with a bunch of new information. It’s all about, ‘let’s cope with the feelings you’ve had for 10 years now since clearly they’re not going away and medication hasn’t worked,'” Polich says. But no one ever suggested testing her for ADHD.

That’s likely in part due to the ADHD diagnosis disparity that exists for women.

Additionally, many women may have what’s characterized as the inattentive type of ADHD, Dr. Hamdani adds. Symptoms typical of the hyperactive type of ADHD, such as having trouble sitting still, are most commonly portrayed in the media, and many people — including professionals — may be unfamiliar with signs of the inattentive type, such as being easily distracted or having trouble finishing tasks. “They’re not really being disruptive to anybody else besides themselves,” Dr. Hamdani explains. “They just kind of move through the ranks and then as they get older they learn to hide their symptoms a little bit better,” she says. This is what experts refer to as “masking,” and as a result ADHD symptoms can become internalized. “So you might not be hyperactive on the outside, but your brain might be extremely hyperactive,” King explains.

“I think that self-diagnosis to some degree is very valid, because what people are doing is they’re looking for answers.”

If you’re a person of color, your chances of being diagnosed are even slimmer. For example, “Black children are diagnosed with ADHD at only two-thirds the rate of white children, despite displaying greater ADHD symptomatology,” per a Clinical Psychology Review study. Asian and Hispanic children are also significantly less likely to be diagnosed. As a South Asian with ADHD, Dr. Hamdani says, “there is huge variation in how physical illness and mental illness, specifically mental illness is treated within different cultural competencies.” In her own experience, “mental health was never really discussed in our family.”

It’s because of this clinical and cultural disparity that Dr. Hamdani agrees with Polich about the role of self-diagnosis. “I think that self-diagnosis to some degree is very valid, because what people are doing is they’re looking for answers. And they’re looking for ways to describe their own internal environment,” Dr. Hamdani says. “There’s so much important clinical data that you can get from someone being like, ‘I think this is what’s going on.'” Even if the diagnosis doesn’t end up being ADHD. King also notes that, “it can be validating to have a name for the things that you’re struggling with and not feeling like there’s something inherently wrong with you, or you have a character flaw.” For Polich, ADHD Tok became a mirror, allowing her to better see her own symptoms, and giving her the confidence to advocate for herself when seeking an official diagnosis.

Still, both experts emphasize that self-diagnosis is the first step toward an answer, but not a final solution. “Because ADHD can also share a lot of symptoms with other other conditions like depression and anxiety, or even mood disorders, you could be giving yourself the wrong diagnosis,” King cautions. “And so I think that’s where seeking a professional is really important, because they can look at the whole big picture and figure out which diagnosis actually fits you the best, versus maybe a bunch of things on social media that you might resonate with,” King says.

If you think you have ADHD, seek out information via reputable resources, Dr. Hamdani suggests. Polich says that she made sure to get her information from actual psychiatrists and experts on TikTok, rather than general first-person accounts or ads. While licensed psychologist-backed social media posts can be helpful to an extent, King recommends a more thorough resource such as The ADDitude Directory and Children and Adults with Attention-Deficit/Hyperactivity Disorder (CHADD) for more comprehensive information, and help on where to get diagnosed near you. Once you’re diagnosed, you can work with an expert to figure out the best treatment plan, which may include therapy, medication, or a combination of both.

If getting diagnosed isn’t an accessible option, King recommends checking in with a local university. Psychology programs may offer that service as a lower cost, she says. And if seeing a professional is just not financially feasible, but you’re certain that you’re experiencing symptoms of ADHD, Dr. Hamdani suggests that you continue to do your own research and find the behavioral management techniques and coping strategies that work best for you. (But, again, no one should take prescription medication without consulting an appropriate doctor first.)

Ultimately, people talking about mental health conditions online is a good thing; it helps remove the stigma that can surround certain conditions, and may lead people to seek help for symptoms that get in the way of their day-to-day functioning. But, of course, you can’t trust everything you hear on the internet. So take the information you learn with a grain of salt, do plenty of your own due diligence, and if you can, try to speak to a healthcare provider before getting too attached to a particular diagnosis or symptom management plan.