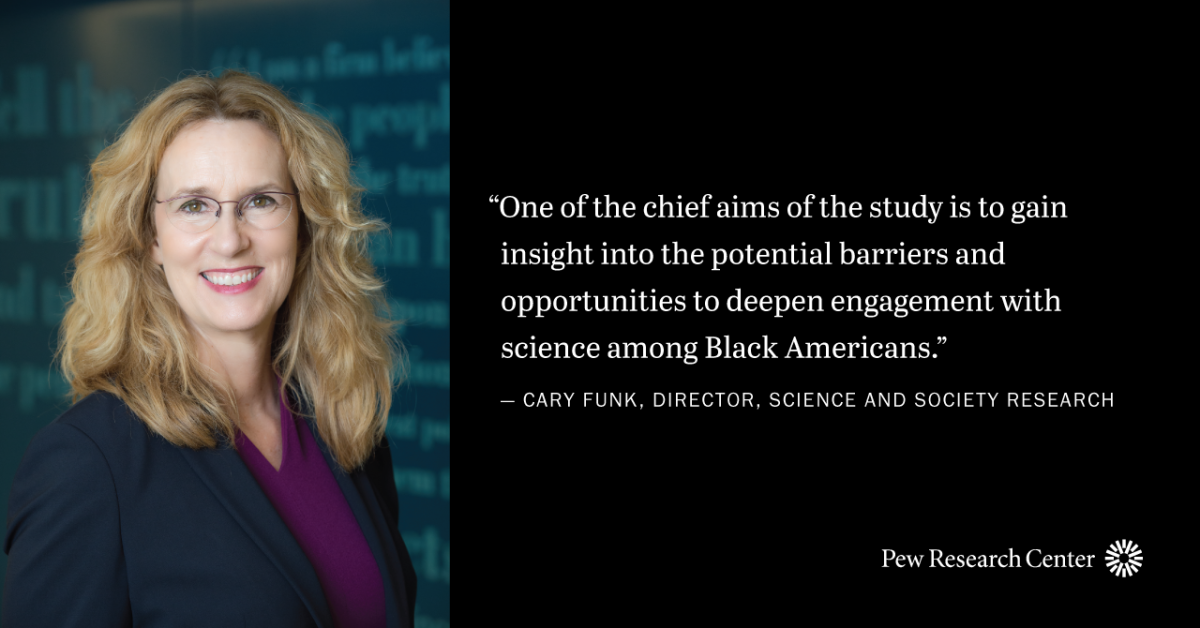 A new Pew Research Center survey explores Black Americans’ views of and engagement with science. The survey, along with a related series of focus groups, shows the many nuanced views Black Americans hold on the issue.

We spoke with Cary Funk, director of the Center’s science and society research, about the new findings. The interview has been edited for clarity and condensed.

This is the first extensive look Pew Research Center has taken at Black Americans’ perspectives of and engagement with science. Why did you decide this research was important now?

Long before the COVID-19 outbreak, we saw a need for research that could offer an in-depth look at Black Americans’ views of and experiences with science, especially in ways that could address how those views and experiences differ by education, gender, age or other characteristics.

The study builds on past Pew Research Center analyses that have looked at issues of underrepresentation of Black adults in STEM jobs and degree programs – that is, science, technology, engineering and math – as well as survey findings that have underscored high levels of concern about the coronavirus outbreak, which has disproportionately impacted the Black community.

One of the chief aims of the study is to gain insight into the potential barriers and opportunities to deepen engagement with science among Black Americans. We are also planning a follow-up report that takes an in-depth look at Hispanic Americans, who have also been underrepresented in science, and their views of and engagement with the issue.

What challenges did you face in approaching this project?

One particular challenge was that science is a really big topic that covers wide-ranging fields and can hold different meanings and associations for people. With so many potential issues to explore, we ultimately decided to focus on the areas where people encounter science in their daily lives.

One of the first things we did for this project was to convene a group of experts around the nation who could help advise us on the topics to include in the study. The group included outside experts who specialize in research with Black and Hispanic Americans, as well as Center staff who lead research on race and ethnicity in other topic areas. Early conversations with this group were invaluable in guiding the approach we took.

The focus groups informed every aspect of the research project. Our research partners facilitated rich discussions around the country where Black Americans – across a range of backgrounds – talked about their own experiences with science.

These conversations shaped the subject matter we focused on in the survey as well as many of the specific questions we asked. Excerpts from the focus group discussions are featured throughout the report; they amplify the personal experiences behind the survey data.

Focus group participants shared a number of ideas that have implications for those in the science community who are looking to deepen engagement with Black communities. Some mentioned the need to talk honestly about biases and mistreatment in the past. For example, when thinking about what would need to happen for there to be more trust in science among Black Americans, one participant in the focus groups had this to say: “There is a history of the African American inventing – and inventing is synonymous with science in our minds – and having the invention stolen, not prospering from them.”

The report covers issues including Black Americans’ views of medical researchers, their health care experiences, their experiences with education in STEM, and their engagement with science information more broadly. Why did the report focus on these particular subjects?

The health and medical care system is one of the primary ways people encounter science in their daily lives. There are ongoing efforts to address systematic bias in the medical care system, as well as efforts to improve trust between Black Americans and the broader science, medical science and public health communities. And while this research was in the works before the coronavirus outbreak, the pandemic has been a stark reminder of the disparate health outcomes Black Americans face. It was essential for the survey to be able to speak to health and medical experiences.

Another key way that people encounter science is through the educational system, which is also an important avenue for representation in the STEM workforce. Classroom experiences with science and related subjects can be crucial in shaping whether or not a young person continues to pursue training in these subjects in the future and how they engage with science information over their lifetime. We knew we needed a robust set of questions on this topic.

We also wanted to explore how much science news people get – and who they say they can rely on for that information – amid growing concerns about the role of misinformation in society.

Attitudes about science vary not only from one racial or ethnic group to another, but among each group, too. What are some of the most significant differences in views you observed among Black Americans in this study?

We saw important differences by education, gender and age. For example, Black adults who have completed a college degree or more education stand out from others in their sense of what could help improve representation in STEM. About three-quarters in this group think that having more visible examples of Black achievement in STEM would help a lot to spur more young Black people to pursue college degrees in these areas. These findings are a reminder that people’s attitudes are influenced by their experiences in life.

In health care, Black women ages 18 to 49 stand out from their elders and from men in their experiences in clinical settings and in their views about health care providers. They also express ongoing concerns about racial bias in treatment for pain management, and are more inclined to say they would prefer to see Black providers for their own health care needs.

Which of the report’s findings caught your attention the most?

I often speak with people working in science, medicine and public health about how to address trust and mistrust among Black Americans, as well as other groups facing health disparities. I spend a lot of time in those discussions trying to explain the complexities of public trust. These survey findings illustrate those complexities very well.

On the one hand, there is a legacy of mistreatment in medical research and ongoing disparities in health outcomes that fuel mistrust. The survey finds most Black Americans express a wariness about medical researchers’ trustworthiness when it comes to admitting their mistakes and taking responsibility for them when they happen. And 61% of Black adults say that medical research misconduct is just as likely to occur today as it was in the past, rejecting the idea that procedures in place today will prevent serious cases of research misconduct.

At the same time, Black Americans have more positive than negative views of medical researchers when it comes to whether they can be trusted to do a good job, whether they care for the public interest and whether they provide fair and accurate information. And their overall trust in medical scientists to act in the best interests of the public is greater than that for other major groups and institutions, including the military, K-12 public school principals and religious leaders.

This study is part of a broader effort at Pew Research Center to focus on the experiences and diversity of Black Americans. Can you talk about how it fits into that broader goal?

Between this report and our upcoming deep dive into Hispanic Americans’ views and experiences with science, we hope this research will expand our understanding of the contours of public opinion among key racial and ethnic groups in the U.S. We also hope it will lend new insights for ways to deepen science engagement among Black and Hispanic Americans.

How would you like to expand this research in the future?

It has become a truism that “more research is needed.” That sense is genuine, though. Every new insight from data like this raises additional questions. I will give you one example. One of the most telling findings from the survey is the sense among most Black Americans that Black professionals are not particularly welcome in science and that visible Black achievement in these professions is quite limited.

The data suggests that these kinds of impressions can have ripple effects in the extent to which people engage with science over the course of their lives. The findings raise important questions about the factors driving those perceptions, as well as what the broader science community can do to create a more welcoming environment for underrepresented groups to learn about, participate in and pursue professional roles in science.