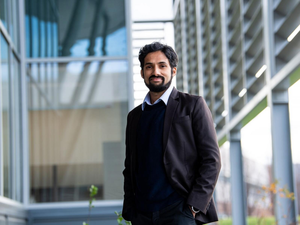 Through sparks, dust, and a primordial roar, a fiery world took shape outside Arun Devaraj’s office.

Three giant electric arc furnaces transformed steel scrap and hot briquetted iron made from iron ore into steel. Every day, Devaraj would venture onto the floor of the cavernous Essar steel factory in Surat, a city in the western Indian state of Gujarat. He’d feel a heat blast from the 1,600-degree molten metal inside a giant cauldron while checking for the quality of the steel chemistry. He’d walk as close as 10 feet from the glowing, sloshing mass. Giant cranes groaned overhead, carrying tons of finished steel slabs toward the rolling mill.

He worked as a quality control and assurance engineer for about two years after graduating in 2005 with a Bachelor of Technology degree in metallurgical engineering and material science from Malaviya National Institute of Technology in Jaipur, India.

It was his first job out of college and Surat was a long way from his hometown in Kannur, Kerala, in southern India. But he was where he wanted to be. He could see, hear, and smell what he’d only read about in books. The son of N. C. Devarajan, a mechanical engineer, and M. Poonchola Devi, a schoolteacher, was at the front lines of an industry that traced its origins to India.

“It was hot, and dusty, and intense,” said Devaraj, now a Pacific Northwest National Laboratory (PNNL) senior research scientist in material science. “I saw steel born out of what used to be dirt. It was fun.”

The mill churned out hundreds of tons of coiled steel an hour. Flawed product occasionally made it to market. And it was Devaraj’s job, when customers complained, to examine the imperfect steel part under a scanning electron microscope, find the defect, determine its cause and origin in the steel making process, then venture into the mill to talk with steel workers to make sure it didn’t happen again.

At PNNL, Devaraj remains committed to improving the quality and performance of metals. He is in the midst of an ambitious project to explore how hydrogen, combined with stress and oxidation, leads to catastrophic failures of high-strength steels that are widely used in the nuclear and automotive industries.

He often publishes research on the topic. In 2020, for example, he contributed to two articles published in Nature that explored the atomic causes of materials degradation. One of the studies examined the degradation of zirconium alloys, a material used most commonly as nuclear reactor fuel cladding in pressurized water reactors. Devaraj also was co-author of a study that looked at a lightweight aluminum silicon alloy widely used in the defense, aerospace, and automotive industries.

His research will have important implications for carbon-free energy sources and their storage. And his research will unfold at PNNL’s Energy Sciences Center, a recently dedicated $90 million facility on the Richland, Washington, campus.

Devaraj could have stayed at the mill in India and perhaps pursued a lucrative career within a massive corporation. But that mill experience unleashed a deeper interest. Two influential professors as well as an undergraduate internship at the Bhabha Atomic Research Centre near Mumbai also offered a glimpse at the appealing menagerie that is the atomic structure of metallic alloys.

A steel mill laboratory colleague helped guide him through the thicket of overseas graduate school applications. An undergraduate research project mentor pointed Devaraj toward the University of North Texas and its materials science program.

There, Devaraj worked for the first time with atom probe tomography (APT), the instrument that has been at the center of his PNNL work.

“You can see atoms in materials in 3D!” Devaraj said, describing the instrument’s specialty. “Basically, it shows atomic arrangement in solids. It’s a powerful instrument to help reveal how atoms get rearranged in materials when we process them differently.”

Devaraj credits a former University of North Texas professor for alerting him in 2010 to a potential PNNL job. At the time, PNNL was adding atom probe tomography instruments at the Environmental Molecular Sciences Laboratory (EMSL) in the first steps to establishing PNNL as a global leader with the instrument.

Devaraj, having earned a PhD in materials science and engineering, applied for a PNNL postdoctoral research position. Suntharampillai Thevuthasan, a PNNL materials scientist who was then a technical group manager, was looking for someone with experience working in atom probe tomography and who was ideally familiar with titanium. Devaraj had both qualifications and began work in May 2011.

“He was fantastic,” said Thevuthasan, now a project manager whose duties have included overseeing development of the Energy Sciences Center. “He knew atom probe tomography and he knew what he was doing.”

“Arun makes things happen,” Thevuthasan added. “When I first talked to him, on the phone, I saw a motivated early career researcher who liked to push capabilities to the limit. That was really important to me at the time, because we were pushing the capabilities of atom probe tomography at EMSL.”

When Devaraj first interviewed to be a full-time scientist in EMSL, however, he didn’t get the job.

Instead, PNNL selected Daniel Perea, then a postdoctoral researcher at Los Alamos National Laboratory who’d earned his PhD in materials science and engineering at Northwestern University.

But Devaraj was persistent and memorable to the hiring team. It wasn’t long before he was hired as a full-time staff scientist at EMSL. The hirings of Perea and Devaraj were part of PNNL’s fledgling advances in APT. Since their hiring, PNNL has added about 25 more APT-skilled scientists, a number rivaled by few other laboratories worldwide.

“When we were hired, Dan Schreiber was already doing APT work in the Energy and Environment Directorate,” said Perea, a materials scientist whose work focuses on using atom probe tomography to map the three-dimensional atomic-scale composition of materials. “Over the past 10 years, Arun, Dan, and myself set the foundation for APT growth at PNNL.”

Devaraj and Perea were co-authors of a review article, “Three-dimensional nanoscale characterisation of materials by atom probe tomography,” published in 2017 in the journal International Materials, that looked at the evolving and improving techniques for use of APT.

Devaraj is pushing the boundaries of that science. The Department of Energy (DOE) in June 2020 bestowed him with an Early Career Research Program award. The competitive annual award comes with five years of research support totaling about $2.5 million.

Shortly before the award was made, Devaraj published two journal studies that offered a glimpse of his focus on materials performance as well as the importance of APT in his research. In 2015, he was lead author of a study in Nature that detailed the use of APT to examine the durability of advanced lithium-ion battery cathodes. In 2016, he was lead author of a study, also published in Nature, that suggested a nanostructured titanium alloy could offer carmakers a lightweight, strong metal that could make autos lighter and thus consume less energy.

Devaraj’s program research combines a broad range of techniques available at PNNL and DOE facilities to understand how events at the atomic level result in microscopic cracks and eventually large-scale degradation. To understand this stress corrosion cracking, Devaraj and team members are studying individual diffusion and oxidation events by using advanced microscopy methods such as cryogenic-transfer atom probe tomography, in situ electron microscopy, synchrotron X-ray methods, and simulations. The goal of the work will be to develop scientific strategies for designing metal alloys capable of withstanding extreme environments of corrosion, stress, and high temperature, which has applications in many industrial-relevant materials for use in nuclear reactors and energy storage, particularly for transportation.

Preparing the application was among the hardest tasks he’s ever completed, Devaraj said, essentially working two jobs at the same time: the day job as a PNNL scientist, then the nighttime push to submit the Early Career application. The proposal process was the culmination of three years of preparatory work that included seeking and receiving a PNNL Laboratory Directed Research and Development Award to get ready for the application. He also consulted with Perea, Schreiber, and PNNL materials scientists Peter Sushko and Karen Kruska.

The proposal process itself lasted four months. But it was not only at night. He also had to negotiate a compromise during a planned vacation on a tiny Caribbean island with his wife. “I had her OK to devote four hours a day to the application,” he said. It may have helped that his wife, Priya Thekkumparambath Mana, is a PNNL power system research engineer who is pursuing a PhD in electrical engineering at Georgia Tech.

Then one day, a DOE official sent an email with the good news. Devaraj had been selected as one of 76 recipients nationwide to receive a 2020 Early Career Research Program award.

“I told my wife and then I cried,” Devaraj said. “It was the happiest moment of my career.”

He called Perea. “Because it was right at the start of Covid,” Perea said, “we didn’t have an opportunity to properly celebrate. But I told him I was very happy for him.”

Devaraj is in the first year of the five-year program.

“In the first year, we established several capabilities that can probe how hydrogen is distributed in materials at an atomic scale and how we can map it in 3-D using atom probe tomography,” Devaraj said. “We are looking at individual pieces: mechanisms of deformation, oxidation, and hydrogen embrittlement.

“Now, in the second year of the award, and in future years, we will be examining the coupled effect of these three individual pieces together as a whole for understanding the mechanisms of stress corrosion cracking of steels in real world environments.”

Life away from the lab

Perea said he has been impressed with Devaraj’s energy at work as well as away from work. “He’s extremely adventurous,” Perea said.

Ah, yes. Devaraj the action figure. There he is now, driving up to North Cascades National Park for a weekend of hiking with his wife. But wait, he’s now leading younger PNNL colleagues to the top of Mount Adams. Mount Hood? Done that. What’s that background during the video interview? A photo he shot of tents arrayed at Camp Muir, launching pad for a Mount Rainier summit. He will climb Washington’s tallest mountain one day, count on it. He’ll find the time to train between martial arts practice and instruction.

“We live through him vicariously,” Perea said, “when we see his social media posts on top of mountains.”

At EMSL, Devaraj walks around an atom probe tomography instrument in a laboratory, explaining its capabilities.

“In this analysis chamber, we’re evaporating one atom at a time from the tip of the APT needle sample,” he said, pointing at a stainless steel chamber on the complex instrument. “The sample is very cold, about 40 Kelvin. That’s more than 350 degrees below zero Fahrenheit. This way, we slow the atoms as much as possible and freeze them in place.

“Then we apply a laser and a really high electric field. We’re essentially ripping away atoms, one by one. Those detached atoms from the sample hit a detector, which records the type of atom and where it came from. We collect information on millions of ions,” Devaraj said. The data will be used to create a three-dimensional image of the arrangement of atoms in that material.

Devaraj has anticipated the day he and his team and crucial instrumentation move into the Energy Sciences Center.

He will be searching for material failure due to corrosion. He seeks a refined understanding of how to prevent corrosion and improve materials. Solutions will be found to store hydrogen and transfer the gas across long distances—essential strides in sustainable energy—and he wants to be part of it.

In essence, he is performing the same task as he did inside the steel mill.

“One big difference; three, actually,” Devaraj said. “I don’t miss the heat, the noise, and the dust.”