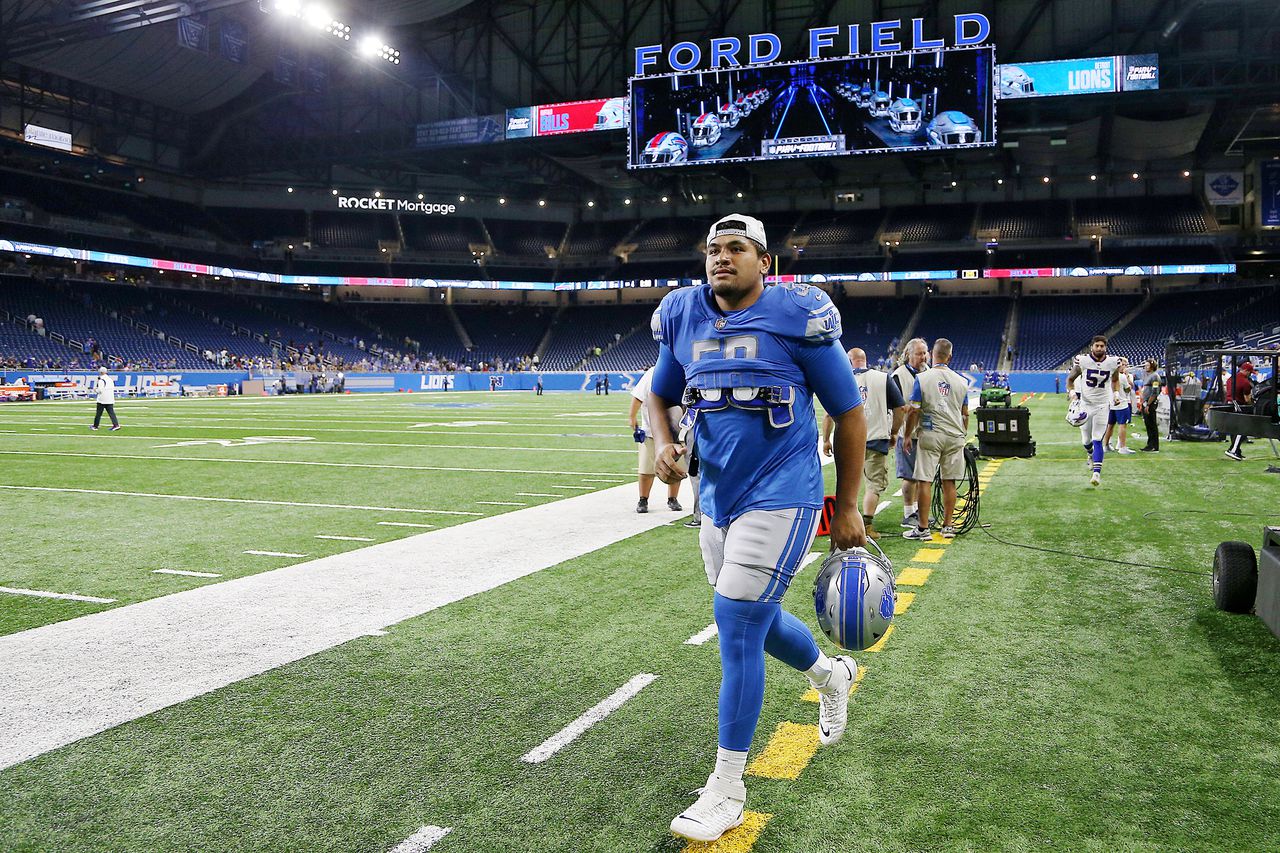 We’re in the weeks between the heat of free agency and the draft, so let’s look back and redo the 2021 NFL Draft for the Detroit Lions. This is the third consecutive offseason we’ve done this exercise. We’ll leave the rest of the draft alone for every other team.

The Lions had seven selections in last year’s draft. It was the first under general manager Brad Holmes and head coach Dan Campbell, so we’ve got an idea of the new regime’s taste. Penei Sewell, Levi Onwuzurike, Alim McNeill, Ifeatu Melifonwu, Amon-Ra St. Brown, Derrick Barnes and Jermar Jefferson were the picks. Each saw action, with Sewell, McNeill, St. Brown and Barnes seeing the most work from last year’s class. Sewell and St. Brown look like potential primetime players. McNeill seems like a likely starter on the inside for as long as he wants to be.

“Again, we talk about — we’re going to get guys that we love. So, you talk about first round, Penei, yes, he is what we thought he was going to be, and Penei is only going to get better,” Holmes said after the season. “I mean, for what he was able to do being a left tackle in college and opting out and is coming in as a right tackle, and then (Taylor) Decker goes out and he goes to left and Decker comes back and he goes back to right. He’s the youngest — I mean, him and Kyle Pitts were the youngest guys in the draft. He’s only going to get better.

“But then, when you go down to the fourth round, he’s still – with St. Brown, he’s still in a mold of he was who we thought he was going to be. It’s the same thing. You can say, ‘Well, he’s a fourth-round pick. You’re not expecting.’ But, Amon-Ra — and I said it to you guys earlier after we drafted him — he reminded me of some of the guys that we had when I was back in LA and I believed that he showed that in his own way. He’s a culture fit for what we’re all about, but again, I think everything just kind of clicked for him kind of late. But we always knew he had the intangibles and work ethic, and he’s just a pro’s pro in the way that he’s wired. That equated to a lot of his success on top of his physical ability.”

With that said, let’s hop into the hindsight machine and get this started:

It was beyond tempting to send quarterback Justin Fields, not to mention do-it-all defender Micah Parsons here. But, this regime is taking the slow approach while giving quarterback Jared Goff every chance through these first two years. Penei Sewell was one of the best rookies in the league, not to mention a perfect fit for Dan Campbell and his coaching staff.

Sewell was the youngest player to start at left tackle in NFL history. He turned 21 years old last season and did so while switching to right tackle, then back to left tackle and back to the right side again for good measure. And while there were some bumps along the way, make no mistake about it — the Lions got themselves a tough, energetic lightning bolt that could be the cornerstone of their offensive line for years to come. Sewell allowed 35 pressures and five sacks across 1,039 snaps. He was among the most dominant tackles in the game on the ground while taking steps forward in pass protection with each rep.

Sewell didn’t get the national love as some of his other rookies. But that’s what happens when you’re a rookie right tackle for a three-win team in the first rebuild year. But with Taylor Decker, Halapoulivaati Vaitai, Frank Ragnow, Jonah Jackson and Sewell back for 2022? Detroit’s offensive line should grab preseason national headlines as one to watch.

Levi Onwuzurike didn’t offer much production. And while he might develop into the pressure creator needed on the inside. It’s hard to ignore this team’s need at linebacker and in someone that can cover some field and eat a tight end. Jeremiah Owusu-Koramoah had some doubters due to questions about his fit at the next level. But he delivered in Year 1 with the Cleveland Browns. Owusu-Koramoah had 76 tackles, three tackles for loss, 1.5 sacks and four forced fumbles in 14 games. His impressive speed showed up on Day 1, helping his game translate. Pro Football Focus ranked him 11th among all linebackers with enough snaps to qualify. He ranked eighth against the run and earned solid marks in coverage and rushing the passer. This defense needs help everywhere, and this franchise hasn’t had a game-changing linebacker for nearly a decade. Owusu-Koramoah could have checked some boxes.

There are three names to stick around on this year’s redraft. Alim McNeill is the second of those names, and it’s not hard to guess the third. McNeill didn’t light the world on fire. But he flashed more than enough while showing growth with each passing week. He looks like a vital piece on this defense moving forward. He was a rock-solid run defender as expected, while flashing more in the pass rush than through his impressive size-speed combination in Year 1. McNeill generated 10 pressures and 18 stops across 422 snaps.

Ifeatu Melifonwu comes with desirable physical traits and could develop into a solid matchup piece on Detroit’s defense. He’s an easy-to-like prospect. Thanks to an injury-hampered debut campaign, we don’t know much about his game. We know that Nate Hobbs looks like a potential starting nickel for years to come. Hobbs was one of the better all-around corners in the game. He had 74 tackles, three for loss, one sack, four quarterback hits, one forced fumble and an interception in 16 games for the Las Vegas Raiders. PFF had him 11th among cornerbacks with enough snaps to qualify. He was 12th against the run, 11th in the pass rush and 19th in coverage. That’s impressive for a fifth-round pick. What’s even more impressive is the impact he made for that defense as Las Vegas made its push for the postseason.

There is no reason to change this selection. The interesting discussion would be to gauge how early Amon-Ra St. Brown would go if we knew all we know now. Because, whew, he was beyond impressive. St. Brown was second among rookies in catches (90), fifth in yards (912) and fifth in touchdowns (five). Those yards and receptions were franchise records for a rookie. What’s that mean? He just delivered the greatest rookie season by a wideout in club history. St. Brown had 51 catches for 560 yards and five touchdowns through the final six games. He had six straight weeks with at least eight catches while seeing double-digit targets. St. Brown fits the mold of what this regime is looking for in players. He’s a willing blocker and versatile piece for the offense that’s shown he can get it done outside or inside. With DJ Chark in the fold, it’ll be interesting to see what St. Brown can do while sharing the field with someone who can consistently stretch defenses over the top.

It was more than tempting to grab Derrick Barnes here, without question, for the record. This defense needs some help at safety, and it’s easier to look elsewhere with Jeremiah Owusu-Koramoah landing here in this redraft. The Lions allowed a league-worst 7.2 net yards per passing attempt while ranking near the bottom of the league on third and fourth down and inside the red zone. Caden Sterns made plays while seeing a rotational role in Denver last season. Sterns saw work at both safety spots and in the slot. He added 28 tackles, two sacks, two interceptions and five pass deflections in 15 games and two starts. That’s the type of production this defense needs — someone who can create takeaways while offering a little depth across the board. Barnes is a nice piece, but safety might be this team’s greatest remaining short-term need.

We’ll cash this pick with the thinking the Lions still get Jerry Jacobs as an undrafted free agent. Jermar Jefferson had a bright spot in Pittsburgh while busting a 28-yard touchdown run. But, he spent most of the season as a healthy scratch or in a limited role. Jefferson had 74 yards and two touchdowns on 15 attempts. He logged 36 offensive snaps and another 12 on special teams. Jaret Patterson earned a roster spot in Washington, then drew regular work on special teams before cracking the backfield. Patterson finished with 266 yards and two scores on 68 rushes while seeing action in 17 games. He did that while seeing 71 snaps on special teams and another 151 on offense.

Could the Detroit Lions really draft a safety with a top-2 pick? ‘We’re looking for game-changers’

9 of 14 players Lions have signed are returning from a three-win team. Why? Brad Holmes defends his approach

Dungeon of Doom podcast: Detroit lands the NFL draft and ‘Hard Knocks!’ More on that, news from league meetings