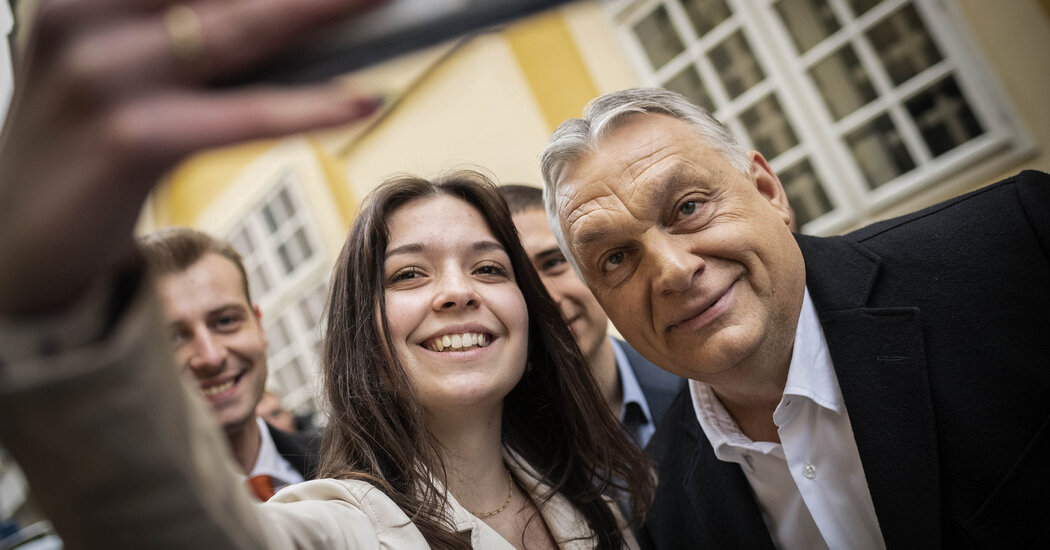 BUDAPEST — Viktor Orban’s Fidesz party just won its fourth consecutive election by a landslide. As was the case four years ago, Mr. Orban’s election was not a fair contest between the Hungarian government and the opposition. Voters could vote for whomever they chose, but the playing field was tilted in favor of the current government, including campaign regulations that favored Fidesz, biased media coverage and a blurring of the line between the ruling political party and the state.

The Hungarian prime minister’s win was due in part to how he protected his economic legitimacy during a cost-of-living crisis by issuing government handouts. He also strengthened his already solid position in rural Hungary. He won the clash of narratives over the war in Ukraine by portraying himself as the guarantor of peace and security, while accusing his challenger, Peter Marki-Zay, and the united opposition of potentially bringing Hungary into war.

The consistent line throughout Mr. Orban’s public policies and communication is the concept of protection — a commitment to halting otherwise rapid changes in the demographic makeup of the country, extending even to cultural transformations and economic shifts. Who or what Mr. Orban thinks Hungarians need to be protected from changes from time to time. Over the past decade, he has fought against migration, the European Union institutions, the U.S.-Hungarian billionaire George Soros, nongovernmental organizations, Western liberals, the I.M.F. and high utility bills, among other enemies.

Protection has been translated by Mr. Orban and his party into the language of family policy and an attack on Hungary’s L.G.B.T.Q. community (see the eventually invalid “Child Protection Referendum,” held on the same day as the parliamentary elections), which suggests that the concept of family is under threat and needs the state’s protection.

In the 2022 election campaign, Fidesz’s most dangerous opponent was the cost-of-living crisis. Several studies done by Policy Solutions, of which I am the director, have shown that by 2021, the government’s parsimonious, socially insensitive handling of the economic effects of the pandemic had made living costs the most serious problem for Hungarians. This has been exacerbated in the past year by a soaring inflation rate, one of the highest in the E.U.

During the campaign, Mr. Orban put in place welfare benefits a few months before the election (income tax rebate for families with children, 13th-month pension, minimum wage increase, exemption from income tax for Hungarians under 25), as well as a price freeze on fuel and some basic food products. The aim of these measures was to dampen the feeling, at least until the elections, that the economy was in a dire situation, and by taking extraordinary economic measures, the Orban government managed to maintain its economic legitimacy in the run-up to the election.

To be competitive against Fidesz, the opposition had two important strategic tasks since the last parliamentary elections in 2018: to unite and overcome the fragmentation that had made Mr. Orban’s earlier challengers unsuccessful and to strengthen the opposition’s support in rural areas. It was already clear from the 2019 municipal elections that if Mr. Orban’s opposition failed to make inroads in rural Hungary, it would be limited to success only in Budapest and a few other cities.

The success of Fidesz in rural districts and its defeat in Budapest show that the country is not only severely divided politically, but also increasingly polarized in geographic and educational terms. Fidesz is highly popular in villages and among the less-educated and older age groups but doesn’t perform as well in cities and among more-educated people and younger age groups.

The highly unequal Hungarian media environment also played a role. It is precisely among demographic groups that are hardest to reach online that Fidesz performed strongest. In terms of traditional media, Mr. Orban’s party dominates, which allows it to effectively communicate its own message to its voters and protect them from opposing views.

The battle to interpret the war in Ukraine shows the power of the Fidesz media empire. It’s a textbook example of how Mr. Orban can quickly give his voters a grip on even the most unpleasant issues.

The Russian invasion pushed to center stage the question of whether Hungary is leaning toward the East or the West and the question of how reliable the country is as a member of the European Union and NATO. Yet Mr. Orban refused to let the opposition’s East vs. West narrative be seen by the whole of Hungarian society as a way of understanding the war issue. He instead transformed himself into a guarantor of peace and security, while accusing the opposition of trying to drag the country into war — a message trumpeted by public media, hundreds of pro-government media outlets and thousands of billboards across the country.

By appealing to society’s craving for security and stability, Mr. Orban ensured that the election did not become a “Putin or Europe?” referendum. According to one poll, 91 percent of opposition voters said the invasion of Ukraine was more “aggression” than “defense” by Russia, compared with merely 44 percent among Fidesz voters. And a quarter of Fidesz voters identify with Russian propaganda.

Despite its fourth election success in a row, it is safe to say that the Orban government cannot expect a honeymoon period. A huge budget hole created by its own measures now awaits it, double-digit inflation is in sight, and European Union funds are not flowing to Hungary because of concerns about corruption and the rule of law. The Orban government is already expecting a significant slowdown in the economy as a result of the war in Ukraine, and the public’s perception of the economy is likely to sour if temporary price-capping measures are rolled back.

The next Orban government will also have to deal with Hungary’s place in the world. Its trademark “Eastern Opening” policy has become a failure, and as its deteriorating relations with its most important ally, the Polish government, show that if Mr. Orban does not change his stance on Russia, it will be impossible to recover. It seems that his reputation could suffer lasting damage from how his government has approached the war in Ukraine.

All in all, the state of the economy and foreign policy make it likely that in spite of another big victory, this will be a difficult term for the Orban government.

András Bíró-Nagy is a political scientist and the director of Policy Solutions, a Hungarian think tank. He is also a senior research fellow at the Center for Social Sciences in Budapest and a member of the board at the Hungarian Political Science Association. His main areas of expertise include Hungarian politics, European integration and radical-right parties.