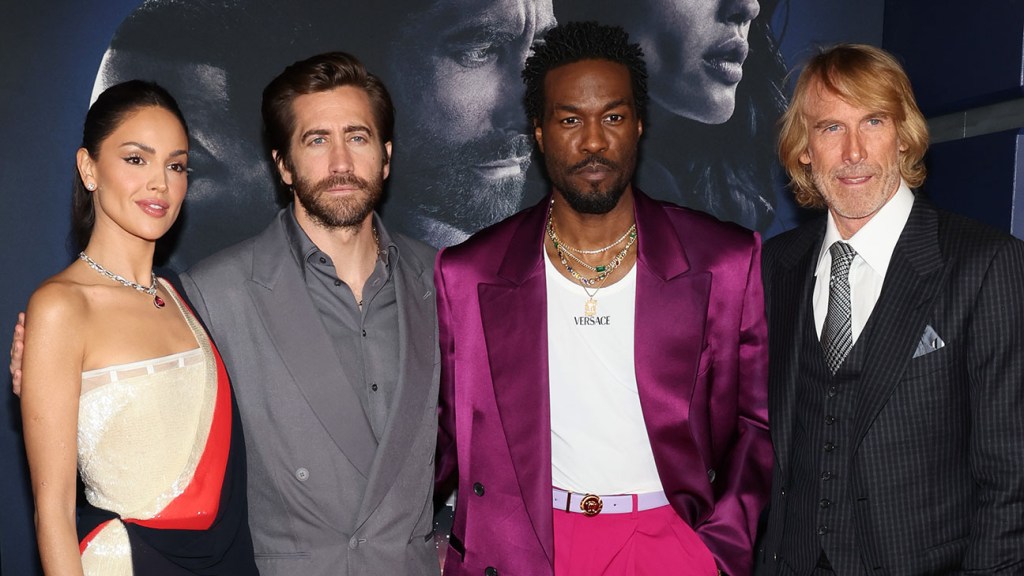 Filmed in just 38 days, Ambulance is what famed action movie director Michael Bay considers one of his lower-budget films — at about $40 million. “For me, that’s small,” Bay said to the audience at the film’s Los Angeles premiere.

On Monday night, the film’s cast and creators gathered at the Academy Museum of Motion Pictures for the premiere of the action thriller. Also in attendance were first responders and members of the Armed Forces and the Los Angeles Police Department, some of whom make appearances as police officers and firefighters in the movie.

Ambulance follows adoptive brothers Danny and Will Sharp (played by Jake Gyllenhaal and Yahya Abdul-Mateen II, respectively) who embark on a Los Angeles bank heist to steal $32 million. When their getaway goes awry, the thieves are caught in a high-speed chase, ultimately hijacking an ambulance carrying a severely wounded cop and his paramedic.

When it came to casting, Bay revealed to the crowd that he wasn’t previously familiar with Abdul-Mateen II. “[Universal Pictures president Peter Cramer] suggested I look at Yahya, and I’m like, ‘What’s a Yahya?’ He goes, ‘[He’s] an actor.’ I said, ‘I’ve never heard [of him],’” Bay recalled. “So, I see his stuff, and I’m like, ‘That guy is gonna be a movie star. I want to work with him.’”

“I knew that it was a short and fast shoot — I’d been working with Michael Bay and Jake Gyllenhaal, and I was just excited about that opportunity,” Abdul-Mateen told THR about what drew him to the project. “I was actually working on The Matrix at the time that this came in my box. This was pitched to me as Michael’s small movie. He said it’s not about action; it’s about tension. And I knew that he would dress the world outside of the ambulance, but I was really interested in what was going on inside of the ambulance, and that’s where we see a lot of the tension play out.”

Most recently, the Emmy-winning actor starred in films such as Candyman, The Matrix: Resurrections, The Trial of the Chicago 7 and DC’s Aquaman. “I try to follow my appetite,” he said about how he chooses roles. Up next, Abdul-Mateen will be starring and co-producing alongside Michael B. Jordan on Amazon’s whistleblower drama I Helped Destroy People.

As for Gyllenhaal, the Nightcrawler actor said it was the enticing prospect of working with Bay that led to his involvement in the film. “I always wanted to make a movie with Michael Bay,” said Gyllenhaal. “I’m drawn to filmmakers and their vision of the world — they’re all so varying and different. I’ve heard so many things about the way Michael Bay makes movies. You know, the bullhorn, the bombastic behavior and all this stuff. And I was like, ‘Ooh, what’s that like?’”

Also starring in the film is Eiza González (I Care A Lot, Baby Driver), who plays the tough paramedic at odds with the Sharp brothers in the ambulance.

“I’m just starting to make the movies that I want to be doing,” said González. “[On this film], you’re surrounded with actors that are leveling you up and really pushing you to be better and learn from them. It’s like a master class, and I really enjoy watching Jake and Yahya on set and just experimenting with them. It is really good to feel like they’re respecting you as an actress.”

As theater-viewing continues to make a slow comeback post-pandemic, Bay is excited for audiences to see a high-octane film like Ambulance on the big screen.

“Streaming’s got its place,” the Transformers director said of the at-home versus theatrical experience debate. “But because of the tension, because of the sound, because of the energy it creates on screen in a big environment … Audiences say it’s very immersive. The only way you’re gonna get immersive — you’re not going to get immersive in your living room. You’re gonna get immersive when you’ve got a great sound system. Big picture. That’s part of the experience. There are great streamer movies, but this is one where you feel the gunshots. It just makes the tension more palpable, and this movie is all about tension.”