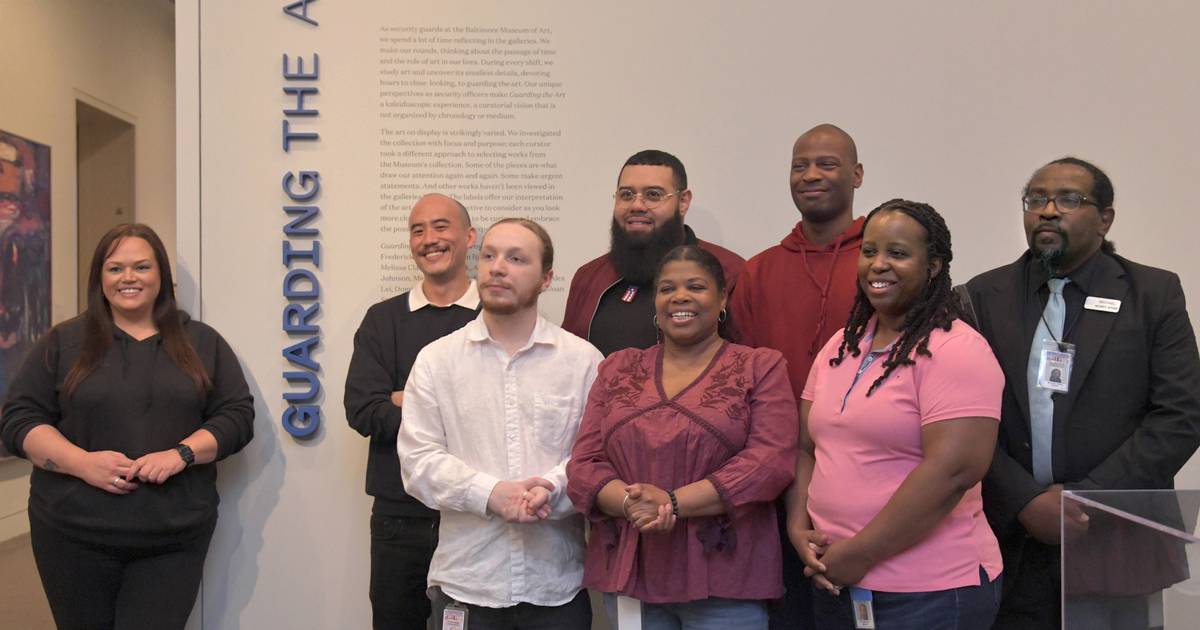 I have no way of knowing what the 16th century Italian artist Jacopo Bassano had in mind when he painted a monkey holding a spear into his large depiction of animals entering Noah’s Ark. Until the other day, when I visited the Baltimore Museum of Art, I had never paid attention to this painting. Given its dark and disguising tones, I certainly would have missed the armed monkey if not for the curator’s note on the wall next to it.

The curator, Bret Click, is employed as one of the security officers who guard Bassano’s oil painting, “Entry into the Ark.” Click has likely spent a great deal of time in the study, passive and active, of this large and complex tableau. That’s exactly the point of “Guarding The Art,” the new and unique exhibit of works selected by 17 BMA security officers.

“Bassano’s work is the perfect opportunity to play a very interesting game of Find It,” Click writes, noting that the busy painting, with its numerous figures, allows him to challenge museum visitors: Do they see the mistake in the lions ascending the ramp into the ark? Can they see the camel? What about the monkey with the spear? Do they see it? And, if so, what’s that in the space right next to it? Is it a second monkey?

Indeed, there’s some sort of Planet of the Apes-meets-Where’s Waldo? thing going on in the lower left corner of “Entry into the Ark.” And, as Click points out, the second simian seems sinister.

“The unknown addition could just be another monkey,” he writes in the curator’s note, “but when I look at it, all I can think of is that a demon is not only trying to stowaway on the ark, it is staring right into me.”

Well, now. That gets a little heavy, doesn’t it?

But Click has at least the first part right: Bassano’s rendering of the escape from wickedness before the Great Flood suggests that wickedness managed to slip aboard the ark and into the future world. More than 440 years after Bassano completed his painting, who can regard Russia’s atrocity in Ukraine and argue with that?

Of course, there are other possible explanations for Bassano’s monkeys. The one with the spear strikes me as playful; the spear might be nothing more than a pointy stick he picked up, as a toy, on his way to the ark. The second monkey might just be in a bad mood. If you were going to be packed into a big boat with two of every species, including orangutans, wouldn’t you be?

Bassano lived in Bassano del Grappa and, for all I know, he might have imbibed too much of the local brandy before painting the Biblical scene.

So you can see how this goes: Look at a complex painting long enough and you discover things that rarely occur in a 30-second glance.

Curator commentary is essential to any exhibit, but more so in “Guarding The Art.” The best part is not so much the expositional prose that, in some cases, seems to have been pulled from art history books, but in the personal experiences of each security officer in relation to a painting, sculpture or object.

For Click, it’s how “Entry into the Ark” allows him to play “Find It” with museum visitors.

Another guard, Dominic Mallari, a native of the Philippines, tells us what he’s come to see in Alfred Dehodencq’s “Little Girl,” a mid-19th Century painting of a child with long dark hair, dressed in a white blouse, holding a basket: “She is free. She does not care about her hair; she is having fun. … The possibilities of this child, in fact all children, are endless. And no child should be judged by what they wear or where they come from.”

Jess Bither pays tribute to “Pallas Athena — Fire,” one of the bold abstracts that the celebrated Grace Hartigan painted after she moved to Baltimore from New York in 1960. “When I stand in front of ‘Pallas Athena — Fire,’” Bither writes, “I feel as if I am looking at a brilliant and unknown moment.”

Elise Tensley honors another Baltimore-based artist, the late Jane Frank, by curating her abstract landscape, “Winter’s End,” a work that has only been displayed twice since it was added to the BMA’s collections some 60 years ago. “Her placement of textured, thick paint may leave one wondering if they are looking at an icy stream or a foggy cliff’s edge,” Tensley writes. “Paintings such as this stoke my curiosity as to what else is left unseen, unknown and unexplored.”

Michael Jones, who has been on duty for eight years and is an artist himself, wants visitors to see but not touch Émile-Antoine Bourdelle’s extraordinary Medusa’s head door knocker. So it hangs behind a glass case that Jones designed for the exhibition.

There’s a lot more, some 25 works in all, than I’ve space to describe.

It’s fitting that the idea for “Guarding The Art” arose during the pandemic, when the crisis sparked a greater awareness of the essential but largely unappreciated work that goes on around us in service to our American lives. It celebrates without patronizing these essential workers at the BMA.

And, amid the pessimism — expressed recently in angry and depressing emails to this columnist — about Baltimore’s condition and its future, “Guarding The Art” provides evidence of this stumbling city’s resilience and its creativity, its knack for inspiring hope despite all.