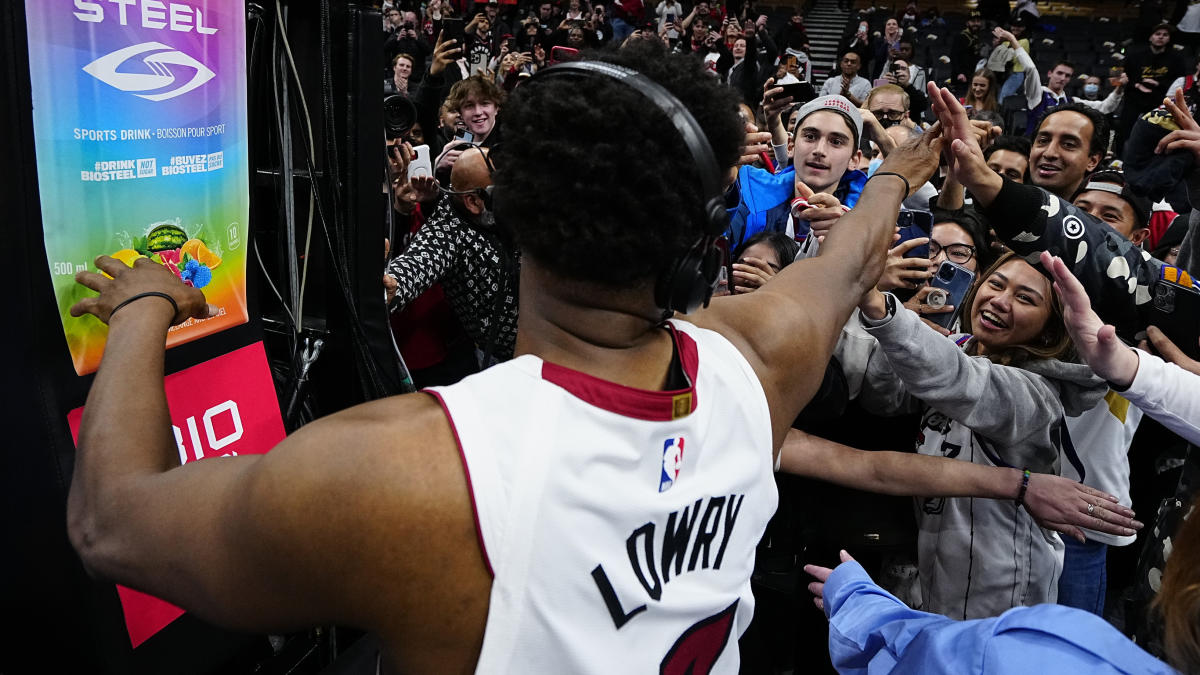 When Kyle Lowry’s Raptors tenure came to an end, with the Raptors flipping Lowry for Precious Achiuwa and selecting Scottie Barnes 4th overall last offseason, nobody knew what the new-look Raptors were going to look like. But we did know that they were going to look different.

While the personnel on the court has changed for the Raptors, causing some of what they do stylistically to be dramatically different, there are elements of the 2021-22 Raptors that embody everything that Lowry stood for. Namely, just how hard they play on a night-to-night basis, and how scrappy they can be when it comes to fighting their way back into games and not giving up.

“Yeah, they play hard every night. They’re all over the place. They scramble. They’re athletic, they help each other very well. They don’t give up much,” Lowry said about the Raptors before his first game at Scotiabank Arena since February 2020. “They remind me a lot of just the team that, when we were down 15 in the fourth quarter, we [used to] find ways to win games, scrap and claw and find a way, and fight to win a game. That’s what these guys do. There’s never a moment where they just don’t feel like they can’t win the game.”

-And that was certainly the case on Sunday night, with both teams battling it out until the very end, with the Raptors bringing an 8-point deficit with 41.5 seconds remaining to within 4, and almost to within 1 when Fred VanVleet missed an open three-pointer with 10.9 seconds remaining in the game, ultimately allowing Lowry’s Miami Heat to prevail with a 114-109 win.

But for as much that has stayed the same since Lowry’s departure, even more has changed. And that was evident from the very first bucket of the game, at 11:04 of the first quarter, when Pascal Siakam created an advantage and blew past his man, heading towards the rim. Then, Lowry stood in front of him, ready to take a charge, for old-times sake. But Siakam doesn’t play out of control like he used to at times in the past. Instead, he saw Lowry’s charge coming and dished the ball off to Fred VanVleet, who missed a mid-range shot but saw his Raptors get two offensive rebound opportunities, with Scottie Barnes ultimately putting one back for the 2-0 lead.

It’s been that way all season for the Raptors: Siakam or VanVleet creating an advantage, and the rest of the guys using their length to cause havoc and attack the glass. In fact, with the size and athleticism that the Raptors added this offseason, they grab 31 percent of their own misses, second-most in the league and the most in franchise history. When Lowry was in town, specifically over the past three seasons, the Raptors grabbed an average of 24.2 percent, as it was never a big part of their game. While they only won the offensive rebounding battle by a couple on Sunday, that first play was a reminder of how much has changed.

It was also a reminder of how much the Raptors rely on their best players. Siakam finished the night with 29-8-5 and 2 steals, while Barnes pitched in with an efficient 19-7-2, including shooting 3/9 from beyond the arc.

VanVleet was the best player in the game. He scored 10 of the Raptors’ first 16 points, 17 in the opening quarter, and a game-high 29 on the night. He also broke Lowry’s 2017-18 record of three-pointers made in a single season in the first quarter of this one with his 239th of the year.

But it wasn’t enough.

Khem Birch, who got the start for the Raptors with OG Anunoby a late scratch due to a thigh contusion, scored 0 points in 13 minutes of play. While Gary Trent Jr. scored 19 on 6-13 shooting with 3 steals, he had a much less impactful game than the box score would suggest, however, constantly allowing Tyler Herro to blow by him and losing Max Struss on screens and in transition, who had a team-high 23-points. Him getting targeted on defence could be an issue in the playoffs, but when the other four defenders on the floor are all 6-foot-9 and fluid, it’s not really that surprising that he is the one getting targeted.

Plus, the Raptors got just 13 combined points from their bench. The Heat bench, led by Victor Oladipo and Tyler Herro, combined for 45. And so, on a night when Jimmy Butler, PJ Tucker, Gabe Vincent, and Dewayne Dedmon all sat for the Heat on the second night of a back-to-back, it was the Raptors’ lack of depth that really stood out.

Part of that is hitting the reset button and going young as a franchise, with a bench made primarily out of young and developing pieces like Precious Achiuwa and Armoni Brooks: guys who are not going to consistently give you what you need, especially on a night like Sunday, where it was a playoff-like atmosphere in Scotiabank Arena.

But the other part of that is Kyle Lowry, or a lack thereof, I should say. Lowry was brilliant for the Heat in this one, setting up his teammates with 10 assists and scoring 16 points of his own. He was constantly taking advantage of the Raptors’ sloppy defensive rotations with picture-perfect passes and putting that porous defense into foul trouble, getting to the line seven times and ultimately willing his team to the win in a way that was eerily similar to how he used to with the Raptors.

“That version of him obviously we have seen countless times where they have an undermanned team and he comes in on the second night of a back-to-back and beats one of the hottest teams in the league,” VanVleet said after the game of Lowry beating the Raptors, who were 10-2 in their last 12 games.” That’s Kyle Lowry right there and that version of him is probably the best version of him.”

The Raptors held a video tribute for Lowry ahead of tipoff, celebrating his greatest moments in Toronto and how much he means to the franchise.

Lowry, who wore his championship ring to the pregame presser and brought his two sons to center court after the tribute, said: “I was like, ‘I’m going home so let me wear something that I felt like I brought home.’ It’s special to me and the city and the country and the organization, so why not wear it?”

“I miss everything about the city, the country, the organization. There’s a lot to miss. You’ve gotta remember, I played in the city for eight years, I played for the organization for nine years. There’s a lot of things to miss. My kids grew up here… It’s a lot of things that you miss. You miss seeing the people that you’ve grown to know, the relationships you’ve built.”

The Toronto crowd gave Lowry a standing ovation following the tribute that lasted several minutes. It was an emotional scene, and one that Lowry deserved.

So… what’s that about OG?

OG Anunoby missed the game due to a thigh contusion that he suffered at the end of Toronto’s win over the Orlando Magic on Friday night. Anunoby tested the thigh pregame, but Nurse said it was a “pretty quick decision” not to play him. Nurse said Anunoby “was limping pretty bad. So I don’t have an update on how long it’s going to be but it is just a contusion and nothing more than that.”

While it sounds like a short-term issue, the Raptors play 4 games in the next six days, with a chance to catch the Philadelphia 76ers for the No. 4 seed in the East and, most importantly, keep their distance on the No. 6 seed, which they currently hold over the Cleveland Cavaliers by 2.5 games.

Yuta Watanabe is also out with quad soreness, and has not taken part in on-court activities, although Nurse said he should be doing so soon. Malachi Flynn was available on Sunday for the first time since March 4th, but did not play.