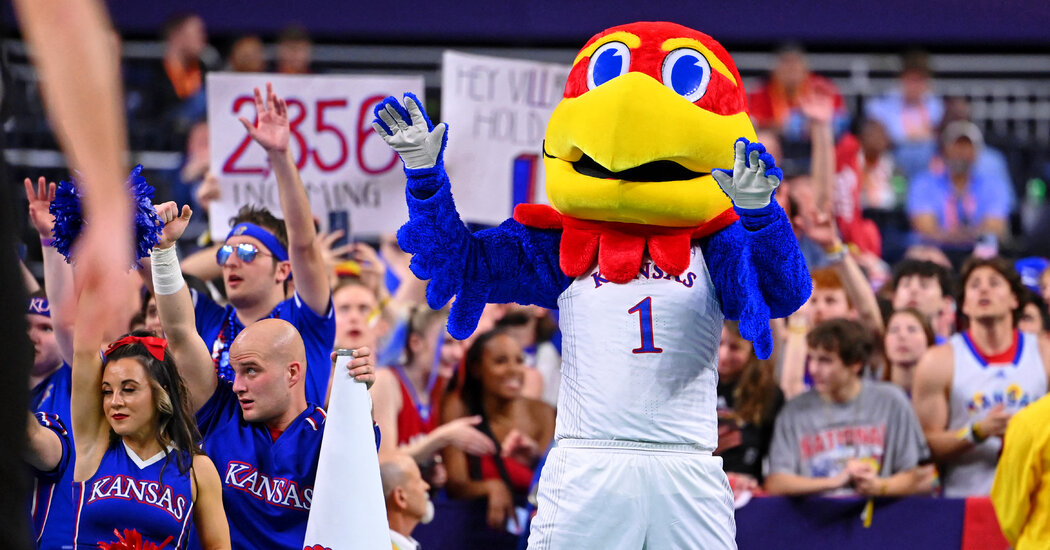 NEW ORLEANS — It all comes down to one final game.

North Carolina and Kansas — two blue bloods in men’s college basketball — will meet for the Division I national championship on Monday night at the Superdome.

The Jayhawks (33-6) are 3-6 in title games, having won the championship in 1952, 1988 and 2008. In their most recent title game appearance, Coach Bill Self and the Jayhawks lost to Kentucky, coached by John Calipari, in 2012. Four years earlier in the title game, Self’s team beat Calipari’s Memphis team, which featured Derrick Rose.

Here’s what to watch for in Monday’s game, which is expected to start Monday at 9:20 p.m., Eastern time, on TNT and TBS:

Hubert Davis can do something no other coach has.

North Carolina’s Hubert Davis is one victory away from becoming the first person to win the Division I men’s basketball championship in his first full season as a coach.

Davis, 51, spent 12 years playing in the N.B.A. and nine as an assistant to Williams before taking over for him last April. He guided the Tar Heels to victories over the defending national champion, Baylor; the darling of the tournament, St. Peter’s; and their most hated rival, Duke=, in Krzyzewski’s final game.

Nine other first-year coaches have guided a team to the Final Four, most recently Bill Guthridge with North Carolina in 1998. Davis is the sixth Tar Heels coach to reach a Final Four.

“I’m just overwhelmed with thankfulness,” Davis said after the national semifinal. “I think about the experiences that I’ve been able to have. I had always dreamed about being part of the program. And to think that I got to play for them, to think that I got to come back and be an assistant coach, and now I’m a head coach of North Carolina and we’re in the national championship game.”

He added: “When you look back, everything significant in my life has happened because they’ve given me this opportunity and a chance to be a part of this program. My wife and I fell in love there. We got married there. After I played in the N.B.A., we moved back, raised our three kids there. Now I’m the head coach there. It’s just a pretty cool deal.”

Davis was asked whether Michael Jordan, who played at North Carolina in the 1980s, was expected to be in New Orleans on Monday. Jordan attended the 2017 Final Four in Glendale, Ariz., when the Tar Heels won.

David McCormack will be a big factor for Kansas.

Against Villanova’s undersized front line, he scored 25 points on 10-of-12 shooting and grabbed 9 rebounds. That followed a 15-point, 4-rebound game against Miami.

McCormack figures to play a critical role on Monday, especially if North Carolina’s Armando Bacot is not fully healthy after stepping on his teammate Leaky Black’s foot on Saturday.

North Carolina Coach Hubert Davis said on Sunday that X-rays on Bacot’s ankle were negative but that he was “a little sore.”

“Obviously it’s a great matchup in the post,” Davis said. He added, “It could ultimately come down to the winner of that matchup being the determining factor of who wins the championship.”

Bacot had 21 rebounds against Duke and is averaging 16.8 per game in the tournament.

“I’ve said all along he’s the one guy on our team that can get 15 and 10 just by being a presence,” Kansas Coach Bill Self said of McCormack after the Villanova game. “He was fabulous.”

Caleb Love has made a difference for North Carolina.

But Love, a guard for North Carolina, did not want to hear about that after he poured in 22 of his game-high 28 points in the second half of the Tar Heels’ 81-77 victory over Duke in the national semifinals. “That’s false,” he said.

The Tar Heels are playing for their first championship since 2017 thanks largely to the stellar performance of Love, a 6-foot-4 sophomore guard. After managing just 6 points in the first half, he, along with the sophomore guard R.J. Davis, helped the Tar Heels control the tempo.

It wasn’t his first breakout game in the tournament. Against U.C.L.A. in the round of 16, Love scored 27 of his game-best 30 points in the second half of a 73-66 victory. He made 6 of 13 from deep after missing his first seven attempts.

If North Carolina is going to beat Kansas, it will most likely need another such performance from Love, who is widely considered a potential second-round N.B.A. draft pick.

“It means everything to me,” Love said of leading his team to the championship game. “I couldn’t do it without my guys and my coaches. I give all the credit to them. They put me in the position and it was a team effort. Just one game away from a national championship, what else can you say?”

Kansas Coach Bill Self can join an elite club.

Bill Self can join an elite club by winning his second N.C.A.A. championship.

With Mike Krzyzewski (five titles) and Roy Williams (three) out of coaching, Villanova’s Jay Wright is the only active men’s basketball coach with at least two N.C.A.A. championships, having won titles in 2016 and 2018. With Kansas’ victory over Villanova, Self is in a position to match Wright.

“I think it does have added value to me and the players because there’s no guarantees in this tournament,” said Self, 59, whose team is the last remaining No. 1 seed in the tournament. “A lot of times the favorites don’t win, obviously.”

He pointed out that his 2020 team “was equipped to make a run,” but the pandemic forced the cancellation of that year’s tournament.

“We were so good defensively,” he said. “And we had enough scoring. I thought that was probably as prepared a team to do well in the tournament as any we’ve had.”