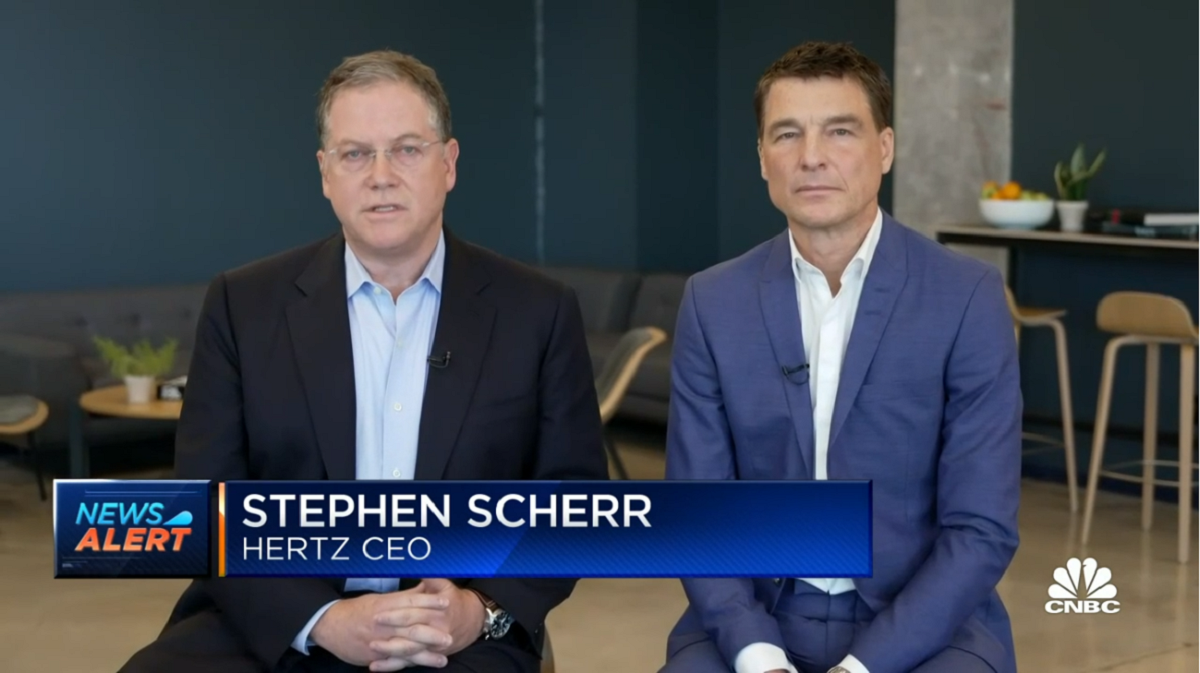 Today, Warren Buffett is known as one of the greatest investors of all time. He has built a $100 billion-plus fortune over the past 90 years and turned Berkshire Hathaway from a struggling textile concern on the road to bankruptcy into one of the world’s largest corporations. From modest beginnings today, the firm has nearly Read More

ANDREW ROSS SORKIN: Welcome back to “Squawk Box” this morning. New this morning, Hertz and electric vehicle carmaker Polestar announcing a new global partnership with Hertz purchasing up to 65,000 EVs from Polestar over the next five years. Joining us right now first on CNBC is Hertz CEO Stephen Scherr it’s his first interview on “Squawk Box” since becoming Chief Executive of the car rental giant in February, also Polestar’s CEO Thomas Ingenlath here. Good morning to both of you. Stephen—

Get The Full Ray Dalio Series in PDF

Get the entire 10-part series on Ray Dalio in PDF. Save it to your desktop, read it on your tablet, or email to your colleagues

SORKIN: How did, I want, there’s so much to talk about, about what what’s going on with Hertz and what’s going on in the marketplace. But let’s start with this partnership. How did it come together?

SCHERR: Well, it came together as part of our ambition to grow, to become the largest electric vehicle fleet in North America and we’re looking to do acquisitions and transactions with all OEMs. Polestar has come forward with a really impressive automobile, one that I’ve driven myself. And this is part in parcel of a growing fleet that really has an opportunity to bring diversification to our overall fleet and to our business where consumers and corporates and fleets, you know, can all, you know, express interest and take up electric vehicles.

SORKIN: And and this is the second such deal. You did one with Tesla already. We should probably talk you about Elon Musk in just a moment. But, Thomas, how do you think about deals like this? And the reason I asked the question is, it may seem obvious that a carmaker would want a big rental company to to buy a fleet of their cars but there’s others who have a view about the perception and image of vehicles that are part of these fleets.

INGENLATH: I think it’s a great opportunity actually for customers to experience the Polestar in a very good situation and they have a chance to test drive our car over a weekend and that will definitely help Polestar’s brand awareness, it will help people to experience electrification, driving an electric car for the first time. I think that’s very important these days. It’s part of our strategy to become on the route to sustainable mobility a big player and of course this is one of the steps.

SORKIN: Is that, is that by the way a shift in the rental car business in terms of how car manufacturers are thinking about working in tandem with rental car companies because there always was this view that oh, you don’t want to be a rental car. But now there seems to be a view with Tesla and now Polestar doing this, that maybe this is a try it and buy it kind of approach.

INGENLATH: See, this is not the one-year rental deal that we know from the past. This is obviously a long-term bringing the car to different purposes, different mobility services, and this definitely is a new way, a modern way of shared mobility and making electrification through throughout the shared mobility accessible.

SCHERR: You know, Andrew in one respect, it it puts Hertz in a different position than where it’s been before. And so you know, the way in which OEMs view cars inside the fleet of a rental car company will be different so Hertz is not just simply offering up as Thomas said an opportunity for somebody to test an electric vehicle, but it opens us up, you know, to serve Uber for example, where a fleet of electric vehicles can be deployed in that segment. It also serves our ability to serve a corporate segment who have their own ESG, you know, obligations and objectives, and therefore can put their employees into electric vehicles. And so the whole mix around mobility and the place of electric vehicles I think has changed and Hertz along with Polestar is now in a position, you know, to sort of feed that.

SORKIN: Speak to, speak to what you just described in terms of the Uber context because that actually is a real shift in terms of just even the way people think about a rental car company. And also what kind of investment it’s going to take, not just in the vehicles themselves, but in the network or the electric—

SCHERR: So there’s a lot there.

SCHERR: Yeah, yeah, for sure. I mean, look first on Uber and the fleet, you know, we think that we can offer and Uber agrees, a price point on a rental of an electric vehicle that puts a driver in a car that I think the consumer wants. They want to be in an electric vehicle. They want consistency of product where Hertz can maintain, clean and put that vehicle out on the street. And I think with Uber, we’ve hit a price point that is attractive to Hertz and equally attractive to their drivers. And so that works. The second point, the second question you raised I think is an interesting one, which is the follow on from all of this is what plays out with respect to charging networks. Hertz will no doubt be a major player having already put in place more than 1,000 charging stations across our premises, and we can facilitate 80% utilization of our fleet. But there’s a bigger discussion at play. I mean, there’s seven and a half billion dollars of federal funding that’s available for charging stations, and one should assume the OEMs, ourselves and various other parties are going to want to get in the middle of that.

SORKIN: Hey Thomas, in terms of interoperability between these charging stations for Teslas for example, and your own vehicles, what’s that look like? And to the extent that Stephen and others are going to be investing in that network, are they all going to be interoperable in the end?

INGENLATH: Well, definitely the open, accessible for all network we’ll be developing, it’s it’s not only the question of the traveling it’s as well in town and how do you make this network accessible? There will be, it will be a question for businesses, for restaurants, it will be a question for the retailers to attract customers, to gain this precious 40 minutes of time that these customers spend, 30 minutes, 40 minutes, this will be worth a lot so I see definitely a very interesting development in investment into the inner town charging infrastructure.

SCHERR: You know Andrew, if you look forward, I have to believe that this becomes more of kind of a quasi-open source proposition. You know, it’s, it’s almost inconceivable to assume that any one proprietary network will be, you know, as available in as many geographies as is possible. And I think you’ll see this start to open, you know, more and more.

SORKIN: Hey Stephen, I gotta ask you two other quick questions. Headline, you saw the CBS News’ reports hundreds of customers allegedly being falsely arrested, effectively cars that were claimed to have been stolen by Hertz, and now senators are calling for investigations into those, into those calls. What are you doing about it?

SCHERR: Well, this is among the first things I’ve started to look to take care of and deal with in the first 30 days I’ve been at the company. It’s not acceptable to Hertz to have any customer, a single customer sort of caught up in some of what’s happened. I think though it’s important to put it in context, which is if you look at the number of people that were impacted in this situation, and it’s unfortunate these were vehicles that were reported as stolen. The theft report was withdrawn when they were found yet these people got caught, you know, in a moment where that that, you know, rescission wasn’t recognized. No one customer should be put through that, Hertz is going to deal properly with people who were affected, but in the same in the same vein, you know, we’re not going to obviously engage with people who look to do harm to the company. We have changed our policies to avoid the possibility of this happening and I think to put context to it, if you look at the several 100 people impacted, we, we engage in 15 million transactions a year, this is 1/100 of a percent of those transactions. But again, it’s to make no excuse, one customer should not be affected by this. We will do right where our customers have been negatively affected and I’m looking to resolve that, you know, very, very quickly.

SORKIN: And I gotta also ask you, Jeff Sonnenfeld at Yale keeps a list of companies that are still operating in Russia. Hertz is one of them. How are you thinking about doing business there or withdrawing?

SCHERR: Well, we’re not, we have withdrawn. We had an arrangement in Russia where there was some form of a quasi-licensing agreement, where we took reservations and dispatched those to the Russian operator. We ceased doing that about two to three weeks ago. So we’re no longer and have not been taking reservations in Russia.

SORKIN: Okay, and then finally, your your other partner at Tesla, Elon Musk looks to be taking a big stake in Twitter this morning. You’re a former banker, what do you think of that?

SCHERR: Well, I think it’s, I mean, you know, Elon, no doubt has something in mind with respect to the company. But you know, I haven’t spoken with him about it and it would be, it would be only speculation on my part as to exactly what his intentions are.

BECKY QUICK: Quick question, Stephen, maybe you can answer this. Somebody writes in on Twitter, it’s tongue and cheek but a good question, “Do they have to fully recharge the car before returning it just like you do fill it up with gas?”

SCHERR: We’re not, yeah, they don’t have to. We’re obviously working through what that pricing component would be. But we’re asking people to bring the cars back at least 80% charged but we’ll work through exactly how all that works.

SORKIN: That’s so interesting. So, what are you gonna do, how often do you run to the gas station right before because you’re trying to avoid the big, the bigger charge?

SCHERR: It is indeed. Look, look, here’s what I would tell you. An interesting fact which is, if you look at the average rental that a Hertz customer engages in on the individual side, 45% to 50% of them will not need to charge in the context of the distance they drive. So that’s a large percentage that won’t deal with that apprehension and we have ample charging stations on our premise to deal with a car once they come back.

SORKIN: I just want, I just want it to be cheaper when I return it with the gas, you know, because I always put that deal in but I don’t know—

QUICK: You just want them to change the way they call it. Instead of a fee, this is a rebate you get.