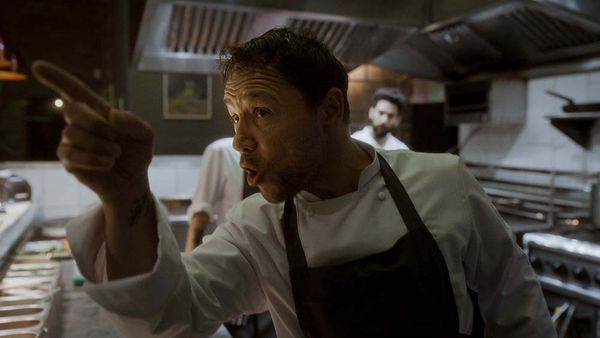 If you like your films to keep you on the edge of your seat then this film from actor-turned-director Philip Barantini – expanded from his short of the same name – should hit the spot. Stephen Graham is a chef about to embark on a stressful night in the kitchen that starts with a stressful conversation with his estranged wife and a visit from a hygiene inspector and just keeps getting worse. Shot in a single take, the technique is much more than a gimmick, adding enormously to the tension as we watch events unfold in the kitchen and at the tables. You’re likely to find yourself admiring the choreography more than more after the event – once you’ve got your breath back.

This psychological thriller reminder of just how versatile an actor the late, great Robin Williams was, Mark Romanek’s film would make a fine double-bill with the similarly tense Williams-starrer Insomnia, which was released the same year. Here he plays Sy the photo guy – a supermarket photo shop worker who becomes increasingly obsessed with the rolls of film he’s processing. As the film inches towards stalker/thriller territory Williams pitches his character perfectly as his actions become increasingly sinister.

Jennie Kermode writes: A rare glimpse of Australian frontier life through the eyes of an indigenous director, this 1920s-set southern western follows Sam Neill’s stubborn preacher as his unwillingness to tolerate racism leads him to take desperate measures and go on the run across the scorching salt flats of the Northern territory. As a posse is hastily rounded up to set out in pursuit, it’s debatable whether the men or the sun will get to him first. There’s no hint of comfort and no room for sentimentality as nature proves every bit as ruthless as the white colonialists who imagine they can tame a country which is far beyond their understanding.

Steve Coogan – who has recently been attracting some controversy for taking on the role of Jimmy Savile – has always been an acting chameleon and he proves his chops again here as Stan Laurel, matched by a sympathetic performance from John C Reilly as his long-time partner, Oliver Hardy, as the pair struggle with a career in decline and an increasingly testy relationship. Jon S Baird’s film is a gentle sort, that begins with a beautifully shot piece of business between the two men before settling into more moving territory about the boys’ last run around the block. The film also finds plenty of interest in the relationship between Stan and Ollie’s wives Ida and Lucille, with Nina Arianda and Shirley Henderson’s performances proving just as magnetic as that of the two main stars.

A perfect bit of escapism for our troubled times, this documentary about elderly truffle hunters and their relationship with their dogs is almost as relaxing as taking a walk in the Italian forests where they roam. There’s Birba, who isn’t just a forager for her octogenarian owner Aurelio, but a sounding board as he contemplates finding romance and Fiona and Pepe who sniff out the highly prized food for their owner Sergio. Each owner, including 88-year-old Carlo – whose wife thinks he’s much too old for these night-time excursions, is delightfully eccentric and captured with warmth by Michael Dweck and Gregory Kershaw. There are some more serious points being made about the industry but this is mostly a simple and satisfying  pleasure. As Kershaw told us: “They are very humble people who don’t think of what they do as being extraordinary.”

A reminder that it’s still possible to make a satisfying screwball comedy, this warm-hearted film from Noah Baumbach and Greta Gerwig channels a similar female energy to their previous writing collaboration Frances Ha – which you can watch as a late-night double-bill with this, starting at 12.35am. Gerwig plays Brooke, who blasts like a whirlwind into the life of freshman and her stepsister-to-be Tracy (Lola Kirke). As Brooke’s imagination takes flight, Tracy barely has time to catch her breath – and neither do we as Baumbach takes us on a road trip to Connecticut and the edge of farce after Brooke’s plans threaten to crumble, deftly skewering the American dream as he goes.

Greek director Yorgos Lanthimos has never been one to play a story straight, and he brings his surreal sensibilities to this consideration of the 18th Century court of Queen Anne (played with just the right quantity of black humour and sentiment by Olivia Colman). Here Duchess of Marlborough Sarah (Rachel Weisz) and her cousin Abigail (Emma Stone) vie to be top dog in the queen’s affections. Acidic and expletive-laced this is not your grandma’s costume drama and all the better for it as the actresses spark off one another like flint on, if you’ll pardon the pun, stone. Praise is also due to cinematographer Robbie Ryan whose often distorted framing only adds to the film’s off-kilter feel. Read what the director and cast said about the film.

Our short selection this week is Stephen Irwin’s Atomic Hubub – advice on surviving a nuclear attack has rarely been so amusing.