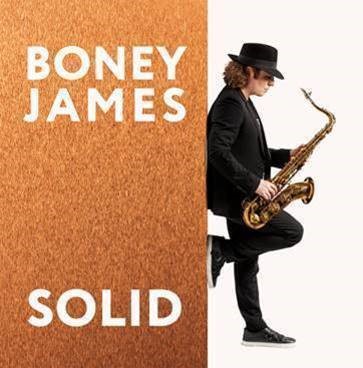 Multi-platinum selling and 4-time Grammy nominated saxophone player Boney James is on the road, performing for fans across the U.S and in support of his album Solid released in 2020.

“I am so thrilled to be getting on the road and playing shows live and in person again and can’t wait to see everyone out there and share some new music from my Solid CD.” Boney James

Despite the challenge of  dropping the record during the COVID-19 pandemic, Boney notched his first Top 10 debut on the Billboard Top Albums Chart, a rare feat for an instrumentalist to be grouped with Billie Eilish, Lady Gaga, Harry Styles etc.  He also stayed connected with fans throughout the pandemic by performing mini-concerts on Facebook Live that garnered 500K + views and added Boney James face masks to his website which are available for purchase at boneyjames.com.

Solid is the four-time GRAMMY nominated saxophonist’s seventeenth album as a leader and follows his smash 2017 release Honestly which became his eleventh #1 Billboard Contemporary Jazz Album.

All of Solid’s eleven tracks were produced and written or co-written by James. Three songs—“Full Effect,” “Tonic” and the title track—were built from licks played at sound-check by touring guitarist Kendall Gilder on the road in support of Honestly. “I said, hey, what’s that riff you’re playing?” James recalls, “And Kendall said, ‘that’s just something I’m messing around with.’ I got my iPhone and recorded them, then took it home and wrote the songs!”

Boney James’ personal relationship with music has never been anything but solid. Picking up the sax at age 10 in his native New Rochelle, New York, “I immediately loved it, and it pretty quickly became my favorite thing to do.” By the time he entered his teens, James was gigging with bands, and he turned pro at 19. He apprenticed as a sideman for artists like Morris Day, The Isley Brothers, Teena Marie and many others, touring and doing sessions for seven years before cutting his first solo album in 1992. The independently released Trust led immediately to a major label deal and a string of increasingly successful recordings and nonstop touring.

James lives in Los Angeles with his wife of 35 years Director/Actress Lily Mariye.

Boney James will perform at Berks Jazz Fest on Friday, April 8, at the DoubleTree by Hilton grand ballroom.