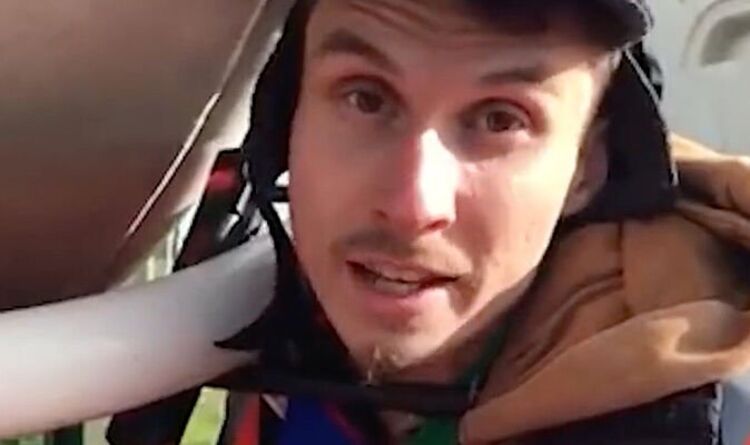 Ford called on other Britons to follow his example to help bring the British oil industry to a standstill and put pressure on the Government to ease off the use of fossil fuels. The climate activist appears to be part of the ongoing Just Stop Oil protests that have caused severe disruption as demonstrators targeted oil terminals in Essex for the past two days. Ford was seen with a D-lock around his neck and locked to an oil tanker as he launched his appeal to people worried about growing energy costs to join the protest.

The video was met with heavy criticism online, with Twitter users raging at the protesters for the chaos they have been causing in recent days.

“Ask them a basic question:80million population, where is all the power going to come from for the homes, 40 million electric cars, industry, hospitals, schools, businesses, deliveries, all by 2030?”

User @99Cotters added: “I wonder how those locks are made? You know … the materials required.. the process of making them and the fossil fuels required to make them.

“Telling us to go to Halfords to buy one yet paying no attention to everything else Halfords sells….”

And @JamesJimJimboJT said: “The future is NOT fossil fuels but in the present, I’ve got to be able to drive my car.

“These people are really accomplished at putting people OFF their message, quite extraordinary actually.”

In his video appeal, Ford said: “Are you sat at home, scrolling through Facebook thinking, ‘what are these nutcases doing?’

Essex Police said officers arrested a total of 83 people after protests in the Thurrock district.

Assistant Chief Constable Rachel Nolan said: “Our officers are continuing to work in exceptionally challenging circumstances with a view to bringing these protests to a safe and swift conclusion.

“I would like to thank businesses, local drivers, and workers for their continued patience whilst we carry out our work.”