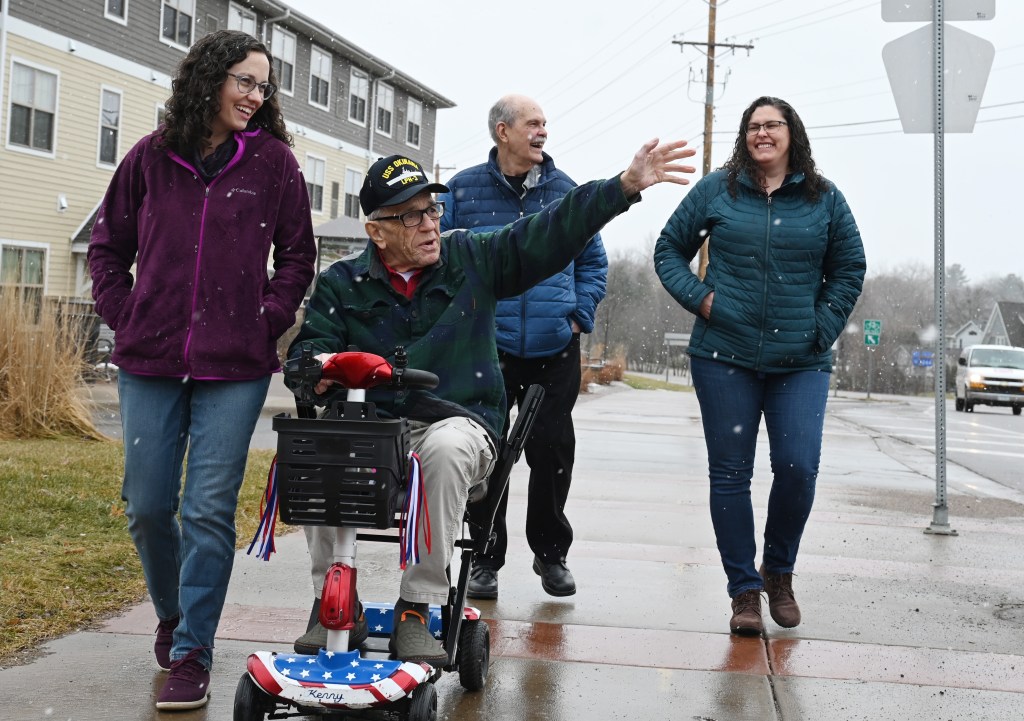 When Kenny Jary first talked to Amazon’s Alexa, it did not go well.

Jary, of Mahtomedi, had a pressing question for the world’s most popular virtual assistant: “Alexa, how about sausage-and-pepperoni pizzas? Are they good for you, or not?”

“Sausage added to your shopping list,” Alexa responded, her robotic voice reverberating through the kitchen.

The exchange, shared on the video app TikTok, has been viewed over 23 million times.

Nine more videos featuring Jary’s Alexa antics soon followed. In one, he asks her to play 20 questions. In another, he asks her to make fart noises. All have been featured on the 80-year-old Navy veteran’s TikTok account, @patriotickenny, which has 1.8 million followers.

Jary, who rolls through Mahtomedi on a mobility scooter decked in red, white and blue streamers, takes his TikTok celebrity in stride. He waves to everyone in town, whether he knows them or not. “Hey there! How you doing?” Jary said last week as he saluted a man driving past on Mahtomedi Avenue.

His mission, he says, is to “do good and spread kindness.”

That mission grew last year after meeting Amanda Kline outside the Wild Bean Coffee Shop in Mahtomedi. A mutual friend, who knew both frequented the coffee shop, had suggested they look out for each other.

Kline, 37, of Willernie, was so taken by Jary’s mission that she offered to set him up with his own TikTok account. She came up with the @patriotickenny handle.

Their first video featured Jary sitting on his scooter and saying “Thank you” and “Hello” in American Sign Language. It debuted in August.

“This is Kenny,” the caption reads. “He’s a 79-year-old Navy vet. He’s hearing, but trying to learn ASL to communicate with his Deaf buddy Jerry.”

More videos followed. In one, Jary scoots past a red Tesla, yelling, “My electric car is better than your electric car.” In another, Jary talks to his friend, Jerry Cooper, over the FaceTime calling app, which Jary calls “SpaceTime.”

“Kenny’s personality is contagious, and he’s so genuine and authentic,” said Kline, who teaches at the Metro Deaf School in St. Paul. “Everyone who meets Kenny loves him.”

A month after Jary’s TikTok account debuted, his mobility scooter broke down. Jary, who didn’t have the money to repair it, was devastated. Kline helped him shared the news on the TikTok account.

“The whole point of showing it was to highlight to the world that this joyful guy isn’t always happy,” she said. “He goes through hardships, just like everyone else, but he doesn’t give up. As Kenny says, ‘We have to struggle on.’ ”

The response was overwhelming. TikTok fans set up a GoFundMe fundraising page and raised $5,000 within the day — more than twice the original goal.

Jary’s emotional reaction to the news was shared on TikTok on Sept. 19, getting over 12.5 million views.

“Within 24 hours, people on TikTok, strangers who have never met you, but love you, donated $5,000 for a scooter for you,” Kline tells Jary in the video.

“No! You’re kidding! $5,000? On TikTok? That is so wonderful,” Jary says, as he breaks down in tears. “I’m sorry for being so emotional, but I can’t help it. That is so nice, Amanda. That’s the nicest gift I’ve ever had in my whole life and then some.”

The money allowed Jary, who has chronic obstructive pulmonary disease, to move to a two-bedroom apartment in Piccadilly Square, a senior-living apartment complex. He paid off his medical bills and back taxes and got some much-needed dental work done. He also was able to buy a new scooter, a portable oxygen tank, a 2011 Ford Escape and furniture for his apartment.

Kline and Jary, along with Jerry Cooper and his daughter, Jenny, started a second GoFundMe fundraiser to help other veterans who need mobility scooters. That fund has raised over $50,000.

Jary, who served on the USS Okinawa during the Cuban Missile Crisis, said it’s an honor to help fellow veterans.

“I know personally how they feel because I was without one, and I couldn’t do nothing. Period,” he said of his scooter. “I was very depressed because I didn’t know what to do. I wanted to go out around the neighborhood and around town and to the coffee shop and talk with people, you know.”

The friends so far have given away about 50 scooters.

Jary grew up in St. Paul, joined the Navy Reserve in 1959 and graduated from Monroe High School a year later. He then went on active duty, serving as helicopter refueler on the USS Okinawa until 1963.

Serving in the military taught him to work hard, be respectful of others and “how to make a bed and do laundry,” he said.

“In America, we got freedom, and that’s the way it should be,” he said. “The military gave us our great freedom, and everybody in the United States should be so proud of that.”

Jary later worked at the Ford plant in St. Paul for 32 years. He married Carol Marsh in 1965 and had three children. The couple divorced in 1988 but remained close until her death in 2018. Jary’s longtime girlfriend, Barbara Sanz, died in 2017.

In a Sept. 30 video post, Jary talked about his regrets.

“I was a bad father,” he said. “I wasn’t there for them a lot. I was out with so-called people I thought were my friends, but they weren’t. We drank. We did a lot of bad things. Those are memories I don’t even like to think about to this day, but it happened, and it can happen to anybody. You just have to go on living.”

“Kenny is such a good TikTok star because he’s not just a one-trick pony,” she said. “Kenny is a lot of different things. What you see is what you get, 24/7. It doesn’t change. It doesn’t matter if the cameras are on or off.”

Kline shoots the videos — about 190 so far — using her iPhone 13 and spends up to 90 minutes a day editing and writing captions. She tries to post a new video by 8 each night.

“I kept getting messages from people, saying, ‘I couldn’t go to bed last night because there wasn’t a video,’ ” she said. “They’ll say, ‘I look for his videos every night, that’s my evening routine’ or ‘I’ve really been having a tough time, I’ve really been struggling, and every morning I was, like, what’s up with Kenny? All right, I can face this day. If Kenny can do this, I can do this.’ ”

Coming up with new material each day isn’t a problem. “Kenny is a walking idea,” she said.

The hardest part is creating the large-font captions that appear with each video, she said. “They have automatic captions, but they’re too small, and that’s not good for our senior friends.”

Kline said she loves TikTok because it is video-based and because it exposes users to new cultures. “It’s like a window to the world,” she said. “It’s the access to everything — with captions and accessibility. It’s very friendly to take a look at it.”

In a world filled with “high stimulation,” Jary’s TikToks are a welcome change of pace, Kline said.

“To see Kenny just kind of slowing down and enjoying the moment, whether it’s him eating whipped cream — he looooves whipped cream — or whatever it is, is comforting,” she said.

Kline declined to discuss any revenue they’ve generated through the account, which solicits donations and links to a Kenny-themed merchandise store, an Amazon storefront and Jary’s Cameo page, where users pay for customized messages.

Jary, Kline and the Coopers have been traveling the country promoting the “Scooters for Veterans” fund since last fall. They’ve appeared on NBC’s “Today” show in New York City, flown to Florida for a paratroopers convention and are headed to Texas later this month to see country singer Randy Travis, one of Jary’s biggest fans.

“Every step of this journey, we’ve all been together,” Jary said. “Our big thing is kindness. … The only other thing on my bucket list is Ellen DeGeneres. I love that woman.”

Last month, the group decided to raise money for deaf Ukrainian refugees. Jary and Jerry Cooper told @patriotickenny followers on March 16 that if they raised $2,500 for the cause, they would paint their hair and faces yellow and blue, the colors of the Ukrainian flag. They came through on March 29.

“Hello, I’m deaf,” Jerry Cooper can be seen signing in the video. “I just want to let you know that I really support you deaf Ukrainians. You guys are brave people in the country so don’t give up, OK? I stand and support you.”

Jary said he’s glad he can use his notoriety to help.

“There are so many wonderful people in the world, especially with everything going on. I’m so happy to be able to pay it forward,” he said. “This has changed my life enormously. I got these angels. I even adopted Amanda to be my daughter. She just came from heaven, it seems like.”

Kline, in turn, said she’s lucky to have met Jary. She volunteers her time as his social-media manager.

“My salary is the joy I receive,” she said. “I’m so lucky to be a part of this. His life has improved dramatically, completely, and I can’t believe I get a front-row seat to that. I’m having the time of my life.”

In a video posted last week, Kline instructed Jary to think of a question he wanted to ask Alexa — and then told him to ask it in a whisper.

“I want to know how many ships there are in the U.S. Navy,” he said.

“Why do I have to whisper?”

Jary did as instructed, and a whispering Alexa informed him the U.S. Navy has more than 490 ships in its active and reserve fleet.

The video ends with Jary asking, “What else can that do?”