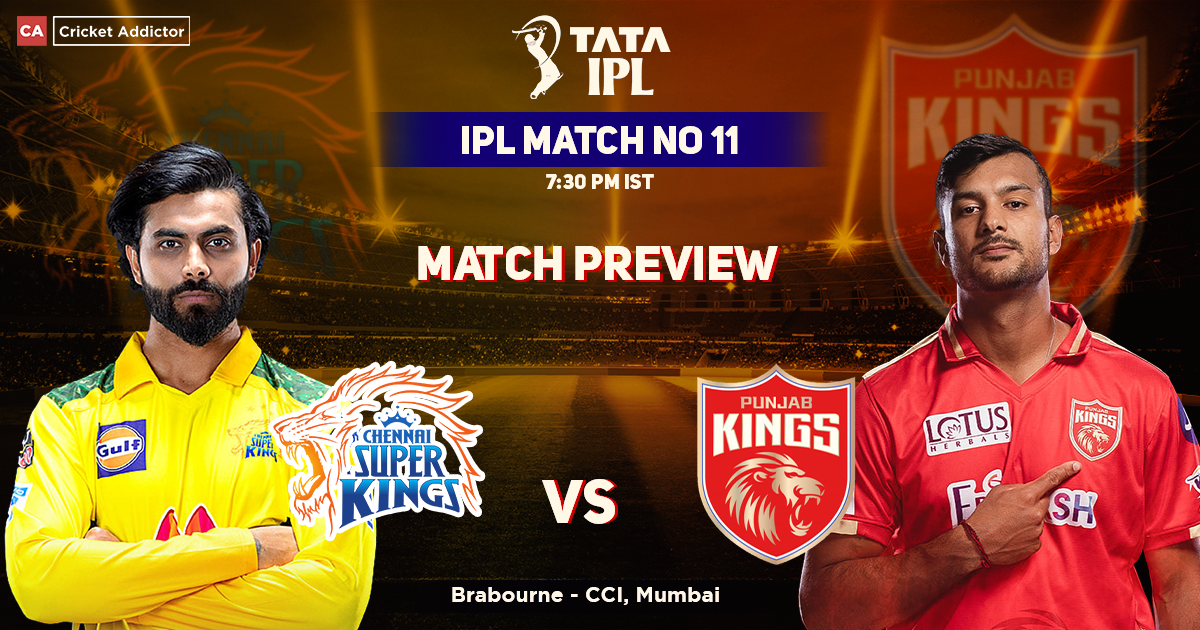 CSK were beaten by Lucknow Super Giants despite scoring 210 while Punjab Kings could resist the forceful Kolkata Knight Riders in their last games. In fact, the Chennai Super Kings under new skipper Ravindra Jadeja had lost both the games so far against Kolkata and Lucknow, a first in their brilliant history. Punjab Kings are placed 7th on the table and Chennai is 8th.

Punjab Kings (PBKS) won its first match against Royal Challengers Bangalore (RCB) convincingly. The Punjab batters were at their absolute best and finished the high-scoring game in the 19th over itself.

KL Rahul and Quinton de Kock got the 211 run-chase to a solid start with a 99-run opening stand after Chennai posted a mammoth 210 for seven with Robin Uthappa scoring a 27-ball 50 and Shivam Dube smashing a 30-ball 49 before MS Dhoni struck an unbeaten six-ball 16 to push the total beyond 200.

For the first time in history, Chennai Super Kings have lost the opening two games of the IPL and are languishing at the bottom of the points table. Seems like the change in captaincy is not going as per planned and they need to rethink their strategy now.

Chennai Super Kings underwent three changes in the last game and still searching for their perfect combination. If Adam Milne has recovered from his side strain, he will surely start in the eleven replacing Mukesh Choudhary. Mooen Ali, Dwane Pretorious, and Mukesh Choudhary replaced Adam Milne, Devon Conway, and Mitchell Santner against Lucknow.

Maheesh Theekshana is another option in the bowling department for CSK. He could be brought in for Mukesh Choudhary if Adam Milne doesn’t recover in time from his injury. Despite a poor showing with the ball in the 19th over against Lucknow Super Giants, Shivam Dube is expected to retain his spot in the playing eleven against Punjab Kings.

Unfortunately, after having a poor outing on his IPL debut where he returned with expensive figures of 0/39, left-arm pacer Mukesh Choudhary will have to make way for Adam Milne only if he is fit. It is very much likely that Devon Conway will miss out in the Chennai Super Kings playing 11 for this game against Punjab Kings as well with Robin Uthappa scoring a brilliant half-century while opening the batting with Ruturaj Gaikwad.

Umesh Yadav finished with 4 for 23 – two in the powerplay and two in the middle overs – while Tim Southee picked two as Kolkata bundled out Punjab in 18.2 overs. Had it not been for Kagiso Rabada and his impressive cameo of 25 runs off 16 balls, Punjab would have settled for an even lower total.

In a massive boost for the Punjab Kings side, explosive wicket-keeper batsman Jonny Bairstow has completed his mandatory quarantine period and will be available for this game against Chennai Super Kings on Sunday.

In his short IPL career, Jonny Bairstow has smashed a total of 1038 runs at a phenomenal strike rate of 142.19. The English cricketer has notched up as many as 7 fifties and 1 hundred in the IPL. For the Punjab Kings, right-arm pacer Nathan Ellis is still unavailable as he is participating in the ongoing Australia tour of Pakistan 2022.

Jonny Bairstow may replace Liam Livingstone in the Punjab Kings playing XI as Bhanuka Rajapaksa has been impressive in Punjab’s first two games. After two horrendous outings, Raj Bawa is likely to make way for Rishi Dhawan in the PBKS playing XI for their third match of the season.