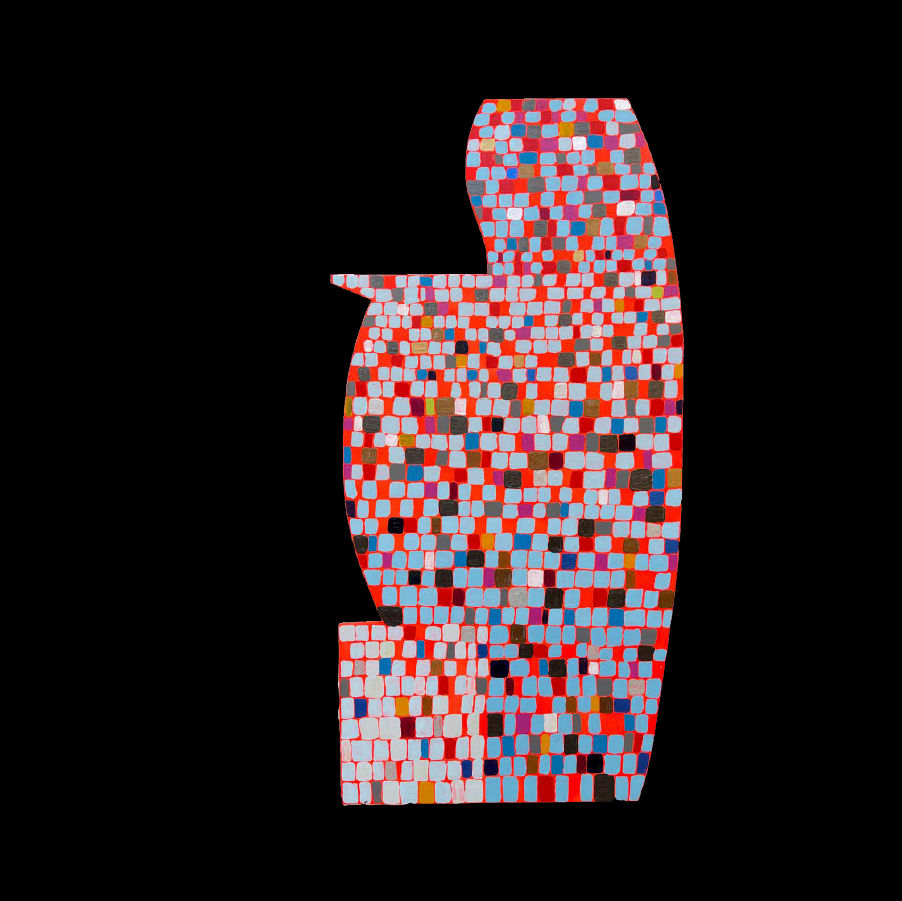 His latest exhibit, then, presented a special challenge. From February 28 to May 25, Walters’ “You’ll Know When You Get There” displays in a virtual gallery operated by the Aston Martin Residences in Miami, Florida. Walters briefly visited the 66-story tower early in its construction, but to this day he still hasn’t stepped inside the bright, minimal exhibition space the virtual gallery re-creates. In fact, the physical gallery—on the 52nd floor—won’t be open to visitors until Aston Martin Residences is finished at the end of 2022, at which point the development will become the tallest residential-only building on the East Coast.

“In my work I use sacred geometries, which harmonize the electromagnetic vibrations in the space,” Walters says. “For this exhibition, I really wanted to bring color and spirit into a digital space, and a neutral space, which isn’t easy to do.”

But Walters was eager to meet the moment. “You’ll Know When You Get There” is just the latest in a line of fruitful collaborations between the mixed media artist and the storied British carmaker he’s admired since he was a boy. While working as Aston Martin’s artist-in-residence in 2019, Walters rendered the brand’s winged logo out of unused leather scraps from the company’s factory and headquarters in Warwickshire. Two years later, he made a similar piece depicting the 007 logo to celebrate the 60th anniversary of the release of the first James Bond film.

“What’s that they say? ‘Be careful meeting your heroes’?” Walters asks. “But you know, I’ve had such an incredible experience with Aston Martin. Seeing the factory, their designs and future plans, I really felt aligned with what they were doing. It really drew out the best in my work.”

A clear point of resonance: Aston Martin builds its vehicles by hand, and Walters hand-cuts and manually measures all his work. First, he solicits old greeting cards from friends and family, painting over the originals to both create color variance and grant the senders some degree of anonymity. (“Objects have memory,” he says. “They’ve been shared by humans with affection, even when you can’t see it.”) Then, he’ll hand-cut the cards into the feather-like petals that have become a mainstay of his art. He estimates that a four-foot-square work uses somewhere between 8,500 and 9,000 petals.

“I’m still resisting getting a machine that cuts out my petals,” Walters says. “My work is a reflection of how busy our culture is: It slows the viewer down and brings into focus our relationship to time. [And] the philosophy of the craft is really present in everything Aston Martin does, too.”

According to Alejandro Aljanati, CMO of Aston Martin Residences developer G&G Business Developments, Walters was a perfect partner for Aston Martin—due not just to his recent association with the brand, but also the ethos associated with his art.

“Robi has an amazing story behind his artworks, recycling all kinds of materials,” says Aljanati. “And today, preserving the world is a major issue for all of humanity. So we loved the concept.”

Walters is the fourth artist to show his work in the Aston Martin Residences virtual gallery. Photographer Julian Lennon inaugurated the online space with an exhibition last May, followed by painters Aaron Schwartz and Fabio Mesa. Aljanati says the gallery plans to retain its current exhibition pace, featuring three or four artists a year in approximately three-month-long shows.

More importantly for artheads far afield from Miami, the virtual gallery will remain accessible indefinitely—even after the residences are complete and the brick-and-mortar exhibition space is open to the public.

“Art is something we love, and we really appreciate beauty,” Aljanati explains. “This is an expression of beauty that we are excited to promote, and we were in a virtual moment of our history when we decided to start the gallery.”

Keeping a virtual incarnation of the gallery also allows featured artists to connect to a wider audience—not to mention more potential buyers. Everything exhibited in the Aston Martin Residences gallery, in both its physical and virtual manifestations, is for sale, except for one Aston Martin Residences commission from each artist. Those works enter the tower’s permanent collection upon being shown.

“It’s not like we ask them to paint the building,” Aljanati says. “They [follow] their expression and what their inspiration brings to them.”

Walters’ commission, “You’ll Know When You Get There” (which also lends the exhibition its name), is similarly evocative. When Walters visited Aston Martin Residences in February 2020, the tower was still mostly a figment of Aston Martin and G&G’s shared imagination. But meeting construction workers on-site and seeing the building’s stunning perch—on Biscayne Boulevard, peering out over the Atlantic Ocean—gave Walters a glimpse of its spirit.

“It reminded me of when I visited New York City for the first time,” Walters remembers. “The sun was setting slowly behind the skyscrapers, and the buildings started to illuminate one by one. The city was alive during the day, but it was somehow even more alive through light at night.

“I was trying to think of the future of Aston Martin Residences in the same way,” he adds. “People living there, working there, passing through—people looking for a home, who walk into a place and just know. I was painting the fantasy of what it could be.”